Francis on 'The Joy of the Gospel': Pope lays out his vision for an evangelical church

Francis on 'The Joy of the Gospel': Pope lays out his vision for an evangelical church 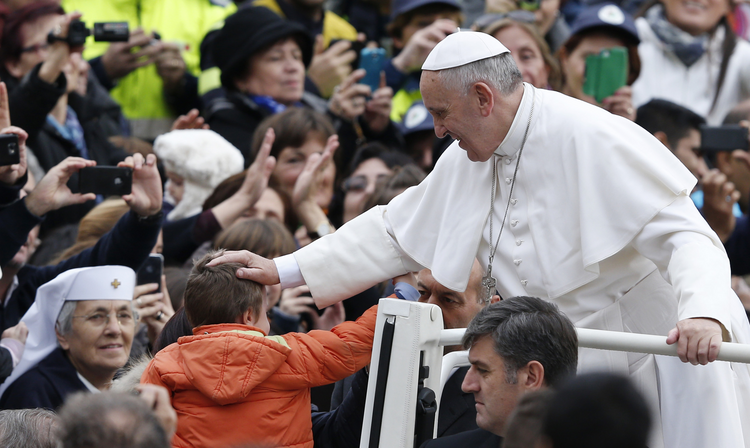 In his first extensive piece of writing as pope, Pope Francis lays out a vision of the Catholic Church dedicated to evangelization in a positive key, with a focus on society's poorest and most vulnerable, including the aged and unborn.

"Evangelii Gaudium" ("The Joy of the Gospel"), released by the Vatican Nov. 26, is an apostolic exhortation, one of the most authoritative categories of papal document. (Pope Francis' first encyclical, "Lumen Fidei," published in July, was mostly the work of his predecessor, Pope Benedict XVI.)

The pope wrote the new document in response to the October 2012 Synod of Bishops on the new evangelization, but declined to work from a draft provided by synod officials.

Pope Francis' voice is unmistakable in the 50,000-word document's relatively relaxed style—he writes that an "evangelizer must never look like someone who has just come back from a funeral!"—and its emphasis on some of his signature themes, including the dangers of economic globalization and "spiritual worldliness."

The church's message "has to concentrate on the essentials, on what is most beautiful, most grand, most appealing and at the same time most necessary," he writes. "In this basic core, what shines forth is the beauty of the saving love of God made manifest in Jesus Christ who died and rose from the dead."

Inspired by Jesus' poverty and concern for the dispossessed during his earthly ministry, Pope Francis calls for a "church which is poor and for the poor." The poor "have much to teach us," he writes. "We are called to find Christ in them, to lend our voices to their causes, but also to be their friends, to listen to them, to speak for them and to embrace the mysterious wisdom which God wishes to share with us through them."

Charity is more than mere handouts, "it means working to eliminate the structural causes of poverty and to promote the integral development of the poor," the pope writes. "This means education, access to health care, and above all employment, for it is through free creative, participatory and mutually supportive labor that human beings express and enhance the dignity of their lives."

Yet he adds that the "worst discrimination which the poor suffer is the lack of spiritual care. ... They need God and we must not fail to offer them his friendship, his blessing, his word, the celebration of the sacraments and a journey of growth and maturity in the faith."

Pope Francis reiterates his earlier criticisms of "ideologies that defend the absolute autonomy of the marketplace and financial speculation," which he blames for the current financial crisis and attributes to an "idolatry of money."

He emphasizes that the church's concern for the vulnerable extends to "unborn children, the most defenseless and innocent among us," whose defense is "closely linked to the defense of each and every other human right."

"A human being is always sacred and inviolable, in any situation and at every stage of development," the pope writes, in his strongest statement to date on the subject of abortion. "Once this conviction disappears, so do solid and lasting foundations for the defense of human rights, which would always be subject to the passing whims of the powers that be."

The pope writes that evangelization entails peacemaking, among other ways through ecumenical and interreligious dialogue. He "humbly" calls on Muslim majority countries to grant religious freedom to Christians, and enjoins Catholics to "avoid hateful generalizations" based on "disconcerting episodes of violent fundamentalism," since "authentic Islam and the proper reading of the Quran are opposed to every form of violence."

Pope Francis characteristically directs some of his strongest criticism at his fellow clergy, among other reasons, for what he describes as largely inadequate preaching.

The pope devotes several pages to suggestions for better homilies, based on careful study of the Scriptures and respect for the principle of brevity.

Pope Francis reaffirms church teaching that only men can be priests, but notes that their "sacramental power" must not be "too closely identified with power in general," nor "understood as domination"; and he allows for the "possible role of women in decision-making in different areas of the church's life."

As he has done in a number of his homilies and public statements, the pope stresses the importance of mercy, particularly with regard to the church's moral teaching. While lamenting "moral relativism" that paints the church's teaching on sexuality as unjustly discriminatory, he also warns against overemphasizing certain teachings out of the context of more essential Christian truths.

In words very close to those he used in an oft-quoted interview with a Jesuit journalist in August, Pope Francis writes that "pastoral ministry in a missionary style is not obsessed with the disjointed transmission of a multitude of doctrines to be insistently imposed," lest they distract from the Gospel's primary invitation to "respond to the God of love who saves us."

Returning to a theme of earlier statements, the pope also warns against "spiritual worldliness, which hides behind the appearance of piety and even love for the church, (but) consists in seeking not the Lord's glory but human glory and personal well-being," either through embrace of a "purely subjective faith" or a "narcissistic and authoritarian elitism" that overemphasizes certain rules or a "particular Catholic style from the past."

Despite his censures and warnings, the pope ends on a hopeful note true to his well-attested devotion to Mary, whom he invokes as the mother of evangelization and "wellspring of happiness for God's little ones."

Show Comments (
1
)
Comments are automatically closed two weeks after an article's initial publication. See our comments policy for more.
Rick Malloy
6 years 10 months ago
Spent a pleasant few hours reading the exhortation Evangelii Gaudium. This is an amazing document. Pope Francis calls all to a renewed passion and vigor in proclaiming Faith in the Gospel and work for justice which is a constitutive dimension of sharing the Good News of Jesus Christ. His insights and down to earth analysis of everything from the homily at Mass to global economic processes is accessible, profound and challenging. This Jesuit Pope is a combo of John XXIII, JP II, Pedro Arrupe and St. Ignatius!
Advertisement