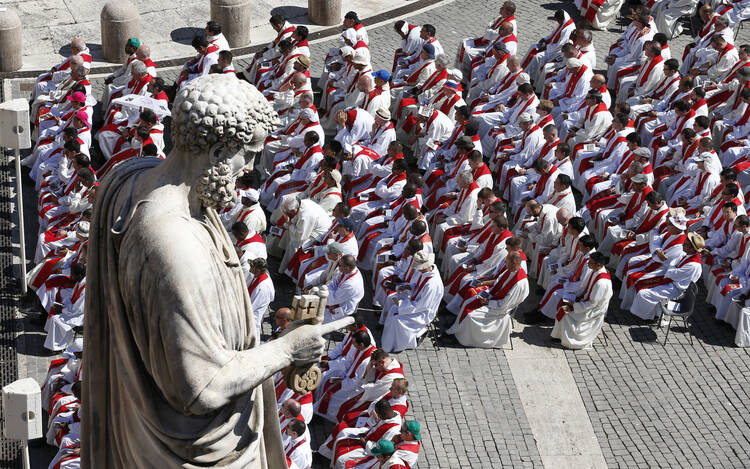 Priests sit below the statue of St. Peter as Pope Francis celebrates Mass marking the feast of Sts. Peter and Paul in St. Peter's Square at the Vatican on June 29, 2018. (CNS photo/Paul Haring)

Since Pope Francis identified “clericalism” as a key factor in the sexual abuse crisis, it has been a topic of intense discussion among both laypeople and priests. Francis sees it as a sickness that associates ministry with power rather than service. A hierarchical attitude that separates clergy and elevates them above the laity, clericalism seems to permeate the institutional church. But while there has been much discussion of clericalism and sexual abuse, the overall sexual behavior and identity of clergy is relatively unexamined territory.

That may change with a three-year research project on “Clericalism and Sexuality” at the Von Hügel Institute for Critical Catholic Inquiry at St. Edmund’s College, University of Cambridge. In September, an international, interdisciplinary group of scholars gathered for a symposium to identify questions of interest. Luigi Gioia, the project’s originator, said he hopes to “collect reliable data and analyze it from an interdisciplinary viewpoint,” especially inviting sociologists and anthropologists to weigh in.

Clericalism’s rewards do not seem to go only to the clergy; they also go to the many laypeople who support and even demand this system of hierarchical separation.

Symposium attendees came from the fields of psychology, sociology and history, as well as theology. Nearly all were Catholic and many were priests, vowed religious or lay members of movements ranging from Opus Dei to the Catholic Worker. To this deeply committed group, it seemed obvious that clericalism has been a disaster for the church. As the theologian M. Shawn Copeland argued, clericalism is based on the assumption that some human beings really are different than others in God’s eyes. It both resembles and overlaps with patriarchy, racism and colonialism, all systems that maintain hierarchical relationships among groups.

Midway through the symposium, the value of an interdisciplinary exchange came clearly into view when the anthropologist Maya Mayblin upended the conversation, which had been largely devoted to identifying the false theological and historical premises of clericalism. Dr. Mayblin observed that, from a more neutral point of view, clericalism seems to have worked quite well, for quite a long time, in the church. But its rewards do not seem to go only to the clergy who attain elevated positions; they also go to the many laypeople who support and even demand this system of hierarchical separation.

For both clergy and laity, the system functions as a personified version of the “Sunday/Monday divide,” which theologians also love to bemoan. In practice, the Sunday/Monday divide solves key questions for people whose workday world demands that they believe and behave quite differently than they do in church. Clericalism, meanwhile, creates a caste of “special” people, enabling laypeople to both call upon priests to be superhumanly good and (sometimes) evade Christian responsibilities themselves. From a theological point of view it is easy to denigrate this system; from a practical point of view, it is clear why many people resist changing it.

The central issue for clergy of all sexual orientations appears to be the systemic dishonesty that can flow from a Sunday/Monday life of public celibacy and “private” (but widely known and tolerated) sexual encounters.

Dr. Mayblin’s interviews with (primarily) ex-priests in rural Brazil, each of whom had been in a long-term relationship with a woman while an active member of the clergy, reflects on how clergy often create a version of this divide within themselves. The act of vesting for Mass functions, for Dr. Mayblin’s subjects, as a kind of “getting into character,” and the man acting as a husband is, in some very real way, different from the man acting as a priest. While this system may appear to have some benefits, it has significant downsides, as is evident in the fact that most of Dr. Mayblin’s subjects have left or are thinking of leaving the priesthood, finding it difficult to envision what systemic change would look like.

Dr. Mayblin was not the only symposium presenter to mention the human costs of a clerical caste system maintained by systemic dishonesty. Sean Larsen, the managing editor of the online academic forum Syndicate, invoked the insights of St. Augustine and James Baldwin regarding the psychological mechanisms of self-deception, which so often poison the soul even as they seem to protect us from acknowledging the consequences of our way of life.

As Augustine wrote, “Unable to conceal what was done, and unable to say it did good, and seeing it obvious they did it,” people “try to transfer responsibility for what they did to someone else, thinking to avoid the consequences in this way. By refusing to acknowledge their guilt they add to their guilt, and they do not realize that by excusing themselves instead of accusing themselves of their sins they do not keep away the punishment, but the pardon.” Clericalism, which enforces a culture of silence about a wide range of priestly wrongdoing in a misguided quest to avoid “scandal,” takes this human tendency to a systemic level, forcing many clergy to become untrustworthy both to themselves and to others.

Clericalism: The culture that enables abuse and insists on hiding it
Cindy Wooden

The central issue for clergy of all sexual orientations appears to be the systemic dishonesty that can flow from a Sunday/Monday life of public celibacy and “private” (but widely known and tolerated) sexual encounters—even as the same clergy castigate laypeople for their own illicit sexual conduct.

As Dr. Gioia commented, most symposium participants agreed that “sexuality is an issue with regards to clericalism not in the sense that sexuality itself is a problem but because a harmonious relation to sexuality requires a healthy relation to power, truth-telling and emotions—exactly the areas which are compromised because of clericalism.”

The Von Hügel project seeks to broaden the conversation about clericalism and sexuality beyond the “the abuse crisis.” Clericalism touches the lives, beliefs and practices of millions of Catholics who have neither committed, directly enabled, nor suffered what we would describe as sexual abuse; how does this systemic reality affect their experience? Because the system maintains both vast power imbalances and an unwillingness to confront its own failings, it seems impossible to avoid clericalism’s link to abusive behavior. This question seems likely to continue to shape the research of the project’s participants, both those seeking to accurately describe the situation and those seeking pathways for change. 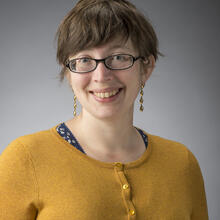