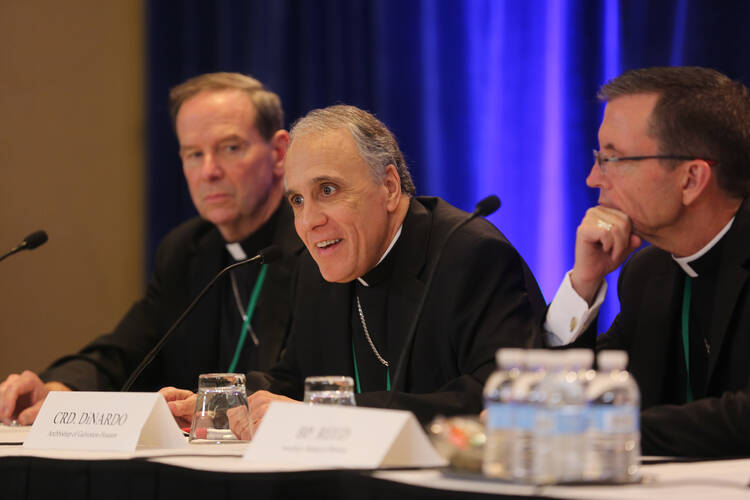 With the first 2020 presidential primary contest less than three months away, U.S. bishops are debating language accompanying the voting guide issued by the conference before each presidential election cycle. While the bulk of the debate will take place on Tuesday, Nov. 12, a glimpse into the preliminary editing process of the introductory letter reveals internal disagreement about how best to bear witness to church teaching in the current political climate.

Proposed changes to a bishops’ letter introducing “Forming Consciences for Faithful Citizenship,” a guide which runs more than 40-pages, are minor. But the modifications—as well as a speech from the pope’s representative to the United States—reveal concerns that segments of the U.S. Conference of Catholic Bishops are not fully on board with Francis’ now six-year-old papacy. Bishops appear torn between continuing the conference’s previous approach to life issues, which in recent years has prioritized attention to abortion, or expanding their collective voice to emphasize a wider range of other issues.

Ahead of presidential elections, bishops have historically added supplemental material and limited revisions to a voting guide they first adopted in 2007. In 2018, a number of bishops said the guide should be completely revised, but bishops voted to retain the existing voting guide and instead draft an introductory letter and produce accompanying videos

In preparation for this week’s meeting, bishops were able to suggest changes to the draft letter. The changes that were accepted by the drafting committee were made available to the media, but the draft of the letter itself was not. According to a set of accepted modifications of the letter, at least one cardinal took exception with the contents, suggesting that parts of the document fail to take the words of Pope Francis to heart by expanding the church’s concerns for issues beyond abortion.

Proposed changes to a bishops’ letter introducing “Forming Consciences for Faithful Citizenship,” reveal concerns that segments of the U.S. Conference of Catholic Bishops are not fully on board with Francis’ now six-year-old papacy.

Cardinal Blase Cupich, the archbishop of Chicago who is seen as one of the pope’s strongest U.S. allies, pointed specifically to a revised part of the letter that sums up a paragraph of “Gaudete et Exsultate,” the 2018 apostolic exhortation from Pope Francis. In that document, Francis writes that the church’s “defense of the innocent unborn” must be “clear, firm and passionate.”

The pope said that the lives of the poor and those endangered by euthanasia, human trafficking and slavery are “equally sacred.” Cardinal Cupich said the draft of the introductory letter failed to reflect the pope’s thoughts, noting that it highlighted the bishops’ desire to protect “the innocent unborn as well as” other issues.

“That is not quite the same thing” as the pope’s actual words, Cardinal Cupich wrote, explaining the rationale behind his proposed changes to the draft. “And it reifies the prioritization of abortion in a way that does not honor this pope’s own way of framing life issues.”

In a 2013 interview with Jesuit journals, the pope said of the church’s opposition to abortion, same-sex marriage and contraception, “it is not necessary to talk about these issues all the time.”

The drafting group responded to Cardinal Cupich’s proposed changes by inserting a handful of new sentences and phrases, but they did not insert paragraph 101 from “Gaudete et Exsultate” in its entirety, as he proposed.

“Children are dying” because of family separation policies. “Seven of them, in fact, met their demise while in U.S. custody. Should we not be raising this up as the life issue it clearly is?”

Earlier in the meeting, the head of the U.S.C.C.B. gave a passionate defense of the church’s work on abortion during his final presidential address. “The continued fight to defend unborn children is one of the most significant things we do. And it will remain so as long as the most innocent lives are left unprotected,” Cardinal Daniel DiNardo of Galveston-Houston, the president of the U.S.C.C.B., said to sustained applause.

Without addressing the voting guide issue directly, in his address to bishops on Nov. 11, the pope’s representative to the United States challenged U.S. bishops to consider if they have implemented the pope’s vision into their own ministries, suggesting that Americans could be more aware of Francis’ teachings.

Archbishop Christophe Pierre said, “It is good to reflect on the ways in which we exercise our communion with the Holy Father and with the wider church.

“The pope has emphasized certain themes: mercy, closeness to the people, discernment, accompaniment, a spirit of hospitality toward migrants, and dialogue with those of other cultures and religions,” he said. “Do you believe that these are gradually becoming part of the mindset of your clergy and your people?”

Archbishop Pierre also asked bishops to consider “practically” how they have “received the Magisterium of Pope Francis.”

“The pastoral thrust of this pontificate must reach the American people,” he said. “Our communion with the Holy Father can be expressed in the concrete actions that we take to make his Magisterium better known among our people.”

Responding to a question from America at a press conference Monday, Cardinal DiNardo rejected the notion that there was tension in the conference when it comes to the pope. He pointed to a three-year strategic plan being considered by bishops this week.

“I think that the finessing of these priorities and plans for the future are an indication of how seriously we take Pope Francis,” he said. “Any kind of dissent and difficulty [that arose] was just making that more clear.”

Archbishop Christophe Pierre: “It is good to reflect on the ways in which we exercise our communion with the Holy Father and with the wider church.

Bishop Robert Reed, an auxiliary bishop from Boston who just returned from Rome where he and other New England bishops met with Pope Francis, said the “urgency” around many important issues does sometimes lead to tension.

“That urgency, as it should, creates a dialogue, which is a healthy thing,” he said, adding the dialogue also “sometimes creates tension.”

“But that’s a good and positive thing, to have that conversation,” he said.

Cardinal Cupich critiqued another section of the draft letter dealing with abortion as “unnecessraily provocative,” and he asked why bishops were not elevating the Trump administration’s family separation policy as a life issue.

“Children are dying,” the cardinal wrote. “Seven of them, in fact, met their demise while in U.S. custody. Should we not be raising this up as the life issue it clearly is?”

In another section, Cardinal Cupich said the letter should highlight other “core issues of the moment,” which he said include gun violence, ethnonationalism, the death penalty and the environment.

“Sea levels are rising. California is burning. Environmental protections have been hobbled by the [Trump] administration. The poor suffer the effects of climate change first. This too is a life issue,” Cardinal Cupich wrote, saying that the document failed to pay sufficient attention to the environment.

Speaking at the press conference, Cardinal DiNardo said that when it comes to the issue of climate change, there is “a sense of its radically growing importance.” But he said in response to a question about whether U.S. bishops approach the topic with a sense of urgency on par with that of Pope Francis, he said he was “not so sure.”

The Editors: The culture wars won’t stop the rise of the religiously unaffiliated
The Editors

Other issues were also discussed Monday morning. Shortly after the initial discussion of the voting guide, Bishop Frank Dewane, who chairs the U.S.C.C.B. committee on domestic justice and human development, spoke about the various gun control policies advocated by the conference, including bans on assault weapons and tighter handgun regulations.

He called gun violence a “crucial issue of national importance” and suggested that gun violence should also be considered a life issue, calling attention to the more than 20,000 suicides caused by guns each year in the United States. Bishop Dewane also suggests adding manufacturers of assault weapons to a list of companies Catholic entities should avoid when making investment decisions.

Bishop Michael Burbridge, the head of the Diocese of Arlington, Va., who heads the bishops communications committee, said at the press conference that bishops encourage “our faithful to bring their faith into the public arena.”

Bishops are able to submit modifications of the introductory letter through the end of the day Monday, Nov. 11, and they will vote on proposed amendments on Nov. 12.