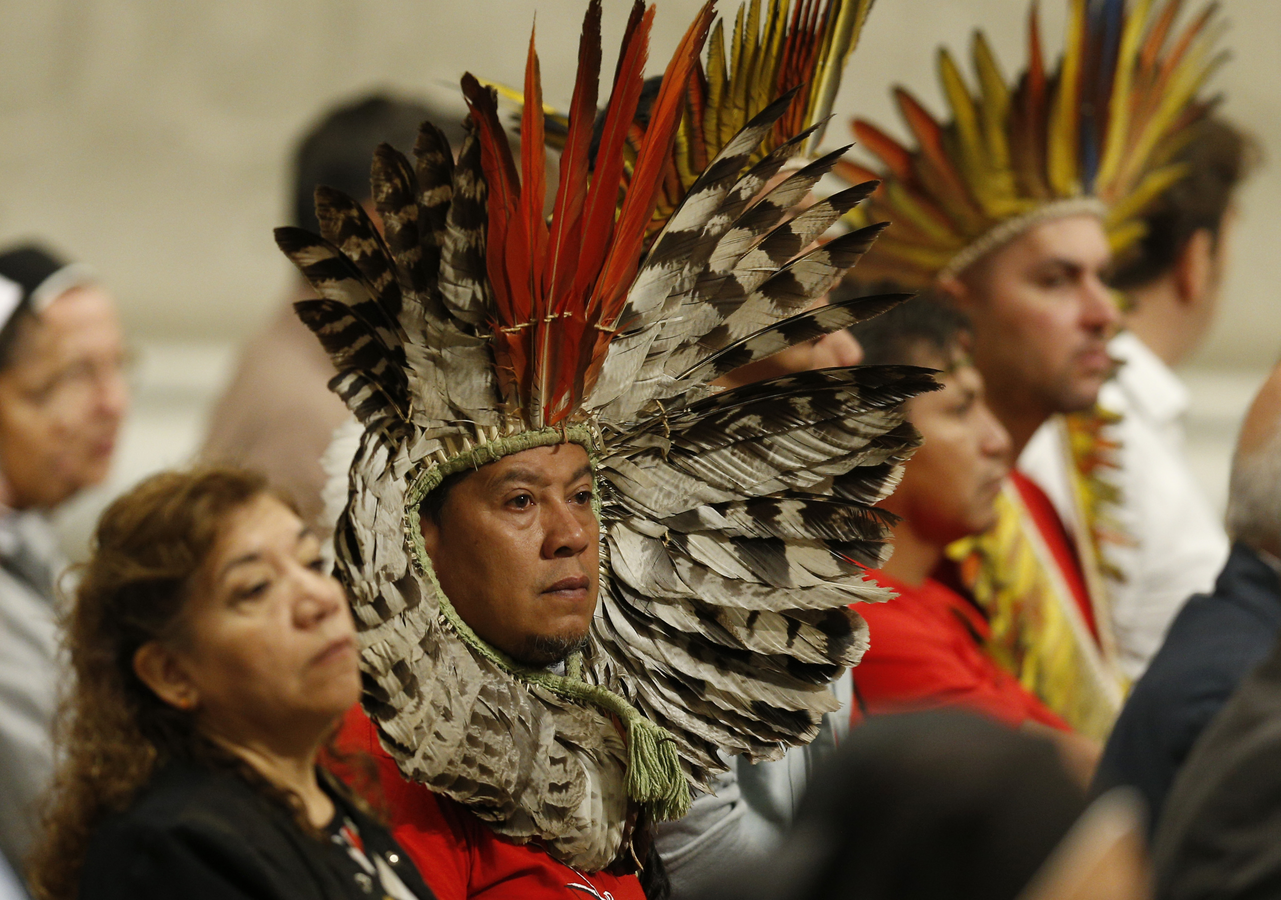 Cardinal Gracias: ‘We must give answers to the issues that have emerged at the synod’

Three main issues have emerged during the first two weeks of the Synod of Bishops for the Pan-Amazonian region: violence against the indigenous peoples, climate change and the shortage of priests, Cardinal Oswald Gracias, the only Asian representative at the synod, told America in an exclusive interview on Oct. 19. “We must give answers to each of them in our final document,” he added.

The Indian cardinal described his experience during the synod so far as an “eye-opener,” allowing him to discover connections to what indigenous communities in his native land are experiencing as they defend their dignity against the encroachments of commercial interests.

“I see that what’s happening [in the Amazon region] is really a worldwide phenomenon of disgracing [indigenous] people, taking their land.”

He said the three main issues had been highlighted in the reports from the 12 language groups presented to the plenary assembly on Oct. 18 and given to the media. But he said the reports for the most part do not contain the specific proposals each group submitted to the synod secretariat. Those will be the basis on which the synod’s final document will be drafted by the team presided over by Cardinal Claudio Hummes of Brazil.

Cardinal Gracias: “I see that what’s happening [in the Amazon region] is really a worldwide phenomenon of disgracing [indigenous] people, taking their land.”

“We wrote proposals, but they were not made public in the hall,” Cardinal Gracias said, referring to the fact that each group had submitted a number of proposals, but nobody officially knew what another group has proposed.

“I was a bit surprised at that because the proposals would show the direction the synod is taking,” he added. “The reports from the groups were a kind of distilling what was said in the hall, but the direction is in the proposals.”

Cardinal Gracias said he was “looking forward” to seeing the first draft of the final document on Oct. 21. This will then be discussed in the 12 language groups (five Spanish, four Portuguese, two Italian and one that includes both English and French).

“We have a whole week to discuss and work on the draft final document. There is no rush,” he said.

He added that climate change “kept coming up over and over again.”

He associated “climate change” with the ecological impact also from “the burning of the forest, cutting of trees, illegal mining, extractive mining and so on.” Discussions of the region’s shortage of priests came out “perhaps a little muted, maybe a little hesitant compared with the first two issues, but still very clear.”

On these important challenges, Cardinal Gracias concluded: “Certainly, we cannot just keep quiet and say, ‘Yes, this is the problem,’ but not give an answer. Ultimately the Holy Father will have to respond, but we have got to say what we think is the way, and then he’s got to take the decision.”

The cardinal, who is archbishop of Mumbai and president of the Catholic Bishops’ Conference of India, the umbrella church body that brings together some 200 bishops of India’s Latin-rite and the two eastern-rite Churches (the Syro-Malabar and the Syro-Malankara), had participated in the Georgetown meeting in preparation for the synod. Still, when Francis nominated Cardinal Gracias to the synod, he wondered what he really knew about Amazonia and what he had to offer. But now he understands the importance that Asia too is represented at this historic event.

“What struck me in the synod is that the church is really one. I felt that so much…. We have similar problems all over the world,” he said.

“I was deeply impressed by the great commitment of the Amazonian bishops to serve the people...to take care of the indigenous people, to think of their future, to avoid any exploitation and violence against these people, to see how they can give the sacramental ministry,” he said.

In “the cry of the indigenous people,” he understood the synod’s relevance to India. In India, he said, “we have the ‘tribals’ and the ‘Adivasis,’” as indigenous peoples in India are known, but “what struck me now is that we never really bothered about protecting their culture. Here I see the Amazonians are so fierce about protecting their culture, but in India we are not, and maybe their culture too will disappear, so maybe we should study that and see how it should be preserved.”

He also saw a similarity at the synod on the issue of exploitation and how “people are being pushed off the forests, and while we don’t have such big forests in India, densely populated, there are a few areas that are inhabited by our people, the tribals, and they are losing that land because they don’t have proper documents.”

He mentioned places like Ranchi, where the tribals “are losing their land and they’re complaining about that.”

In India, he said, “it’s not the government, it’s the [corporations] that are doing this; the companies are trying to take [indigenous] land, they want to take it.

“The government is really friendly with the corporations and the multinationals and is not forceful enough [to prevent this].”

On the other hand, he said, the Indian government “is conscious, has spoken about caring for the climate, caring for nature and protecting the weaker people. But on protecting these people there is not much being done, I must say. On nature, the government is taking care, but there is pressure and I don’t know if it will be able to resist the pressure or not.”

Cardinal Gracias concluded, “I think that Amazonia has much to teach India, and the synod repercussions are worldwide.”

Referring to the problem of the priest shortage, he said the fundamental question here is the need to provide the Eucharist to communities that do not have it except on a very irregular basis, sometimes not for months or perhaps even a year or more.

He said, “Many have asked for the ordination of viri probati, mature married men from the indigenous communities.”

Cardinal Gracias said, “I feel we must answer that question; we cannot stay silent.” He said he spoke about this in his intervention in the plenary session and suggested that the present canon law, if properly understood, could offer a way to resolve the question.

Cardinal Gracias, who is a former president of the Federation of Asian Bishops Conference, said he has participated in many synods and has heard a lot about synodality, but he was most impressed by this synod on Amazonia because “this time it was truly synodal; we walked together; we tried to hear each other; we tried to see the direction the Holy Spirit is leading.”

Indeed, he said, “I think with this synod we see that the synod process has matured; people are beginning to take synodality for granted—but not in the negative sense. They are feeling this is the way we should go today. It’s what we need today.”

The fact that many people in the Amazon do not see a priest for maybe a year which means Mass cannot be celebrated for them has to be addressed. I pray that changes drastically.

Yes but only if it is just change and that means ordaining women first who are willing to be celibate and then if we still do not have enough priests then ordain married people. Sexism not celibacy has been directly linked to child, teen sexual abuse in our church and the sexual abuse of women. Also there is no single element more required than sexual exclusion to uphold the current and abusive clericalism in our Church's leadership.

We. the laity, need to demand of this cardinal and all others to ask themselves what do they care about more: upholding a anti-gospel and misogynistic tradition of excluding women to priesthood, and same opportunities as men, or the health and the strength of the Church in the future.

More and more youth will leave our church while we continue to treat women with indignity, injustice and disdain.

We don't need male or female permanent deacons. We need women ordained priests and bishops and we need this just change to happen immediately.

The problems that the Cardinal sees in the Amazon are nothing new. They existed since the beginning of human activity. What is different is that a large percentage of the world population has escaped these problems so the ones who haven’t say “why me?” There are answers but the Synod is not interested in answering the question.

My guess is that things have been pre-determined and this is all for show.

Is it true that Planned Parenthood is helping to fund the Synod? Bishop Strickland of Tyler, TX believes it.

Are the indigenous people’s living in the Amazon screaming to be Catholic? This doesn’t make sense, If the indigenous people living the Amazon want to protect their culture and customs (which I assume Includes religious practices) and the bishops want to respect and defend that, then the best thing to do is leave them alone. If evangelization is considered racist don’t do it. If the church sends a priest there and all the priests and nuns do is end up wearing feathers and bowing to trees what’s the point? who’s the one being converted?