Inside the relaxed atmosphere of the Amazon synod

Inside the relaxed atmosphere of the Amazon synod 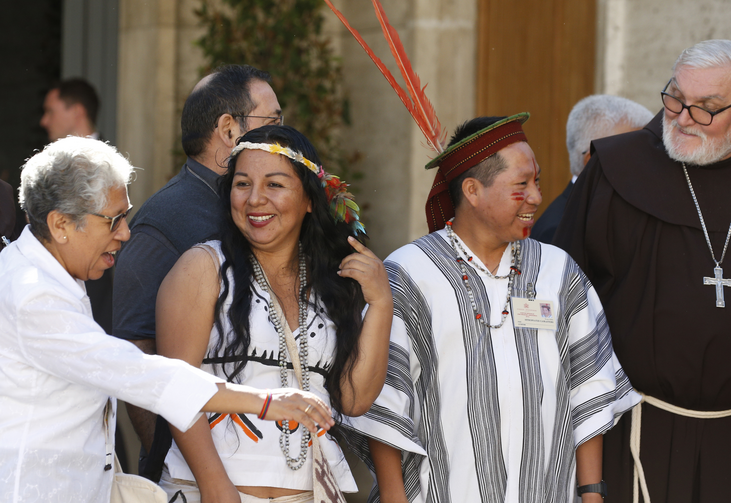 Participants leave a session of the Synod of Bishops for the Amazon at the Vatican Oct. 9, 2019. (CNS photo/Paul Haring)

This week on “Inside the Vatican,” Gerry and I update you on the resignation of the head of Vatican security, Commander Domenico Giani, who was nicknamed “the pope’s guardian angel.” Mr. Giani stepped down from his position after he was unable to identify who leaked Vatican security photos of the five employees who were suspended as part of a financial investigation last week. On the podcast, we explain why it was so important to Pope Francis that the source of this leak be identified, and who will replace Mr. Giani.

Next up, the Amazon synod is in full swing, and it looks a little different from past synods: Lay auditors are sitting with bishops rather than in separate sections, and many bishops are wearing clerical suits instead of cassocks. Gerry describes the scene in the synod hall, and we talk about how the participants’ familiarity and level of comfort with one another has led to the synod taking on big ideas like women’s ministry, the possibility of ordaining married men and economic challenges early in its first week.

Finally, Pope Francis canonized Cardinal John Henry Newman this week. He is England’s first saint born after 1800, and to mark the occasion, Charles, Prince of Wales, penned an op-ed in the Vatican’s newspaper. Gerry and I discuss why Cardinal Newman is such an important figure to Prince Charles and to England in the time of Brexit.

Advertisement
More: Inside the Vatican / Synod on the Amazon / Vatican / Pope Francis