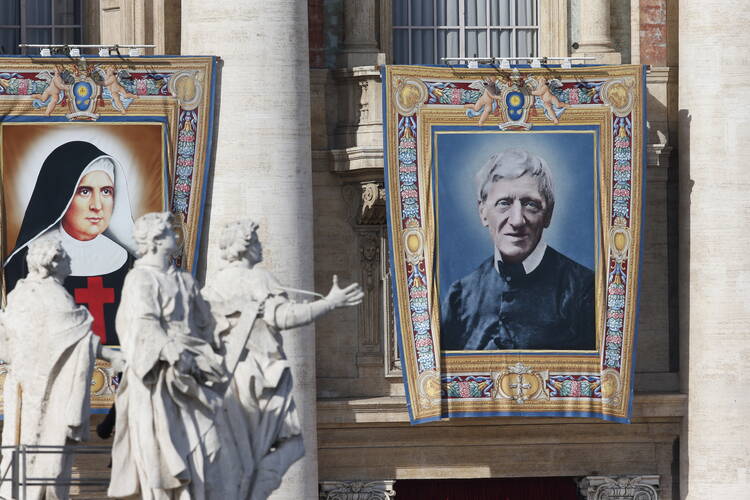 Pope Francis declared England’s Cardinal John Henry Newman (1801-1890) and four women saints at the beginning of a festive Mass in St. Peter’s Square, October 13, attended by 50,000 people from all continents.

The four women are: Italy’s Giuseppina Vannini (1859-1911), founder of the Daughters of Saint Camillus; India’s Mariam Thresia Chiramel Mankidiyan (1876-1926), founder of the Congregation of the Sisters of the Holy Family; Brazil’s Sister Dulce Lopes Pontes (1914-1992); and Switzerland’s Margherita Bays (1815-1879), a laywoman. The first three spent their lives working for the poor.

These canonizations are taking place while the Synod for the Amazon is meeting in Rome and giving great attention to the role women are playing in the life of the churches in the region’s nine countries.

It is also noteworthy that Pope Francis, who has emphasized the development of doctrine in his magisterial teaching, has canonized Newman, who wrote a major work on that topic and contributed greatly to the church’s understanding of that area of theology.

The canonization took place at the beginning of the sung Latin open-air Mass. It began with the reading of brief biographies of the five persons by Cardinal Angelo Becciu, the prefect of the Congregation for the Causes of the Saints, who then requested the pope to declare them saints. Then, the Sistine Choir led the singing the Litany of the Saints after which Pope Francis read solemn formula of canonization in Latin and naming the five blessed said, “we declare and define” them “to be saints and we enroll them among the saints, decreeing that they are to be venerated as such by the whole church.” The choir then sang a prayer with the Alleluia refrain, and the tens of thousands in the square from all continents applauded warmly.

These canonizations are taking place while the Synod for the Amazon is meeting in Rome and giving great attention to the role women are playing in the life of the churches in the region’s nine countries.

Later, in his homily, after commenting on the Gospel that focused on how Jesus cured ten lepers but only one came back to thank him, Pope Francis said, “today we give thanks to the Lord for our new Saints. They walked by faith and now we invoke their intercession.”

He drew attention to the fact that “three of them were religious women” and said, “they show us that the consecrated life is a journey of love at the existential peripheries of the world.” The fourth woman, Saint Marguerite Bays, he said, “was a seamstress” and “she speaks to us of the power of simple prayer, enduring patience and silent self-giving. That is how the Lord made the splendor of Easter radiate in her life.”

Pope Francis quoted St. John Henry Newman on the holiness of daily life, saying: “The Christian has a deep, silent, hidden peace, which the world sees not… The Christian is cheerful, easy, kind, gentle, courteous, candid, unassuming; has no pretence… with so little that is unusual or striking in his bearing, that he may easily be taken at first sight for an ordinary man.” He then continued his reference to Newman with the famous prayer composed in 1833 while Newman was still an Anglican, “Lead Kindly Light,” encouraging the congregation to ask to “be like that, ‘kindly lights’ amid the encircling gloom. Jesus, ‘stay with me, and then I shall begin to shine as Thou shinest: so to shine as to be a light to others’.”

The Mass was attended by tens of thousands of people from all continents including 50 cardinals, 385 bishops (including over 60 from Brazil), 3000 priests and official state delegations from the home countries of the five new saints. A special delegation from Anglican Communion came for Newman’s canonization and, at the end of Mass, Francis publicly thanked them for their presence. He also thanked Prince Charles who led the British delegation, which included several Catholic members of parliament and the British Ambassador to the Holy See, Sally Axworthy. Francis also met Prince Charles before Mass.

Ireland’s Minister for Education attended the ceremony in recognition of Newman’s founding University College Dublin. So too did the President of Italy and India’s Foreign Minister. Brazil’s vice-president, Mr. Hamilton Martins Mourao, was also present, though originally President Bolsonaro had been expected to come to honor this Catholic nation’s first woman saint.

St. John Henry Newman (1801-1890) is the most famous English theologian in modern times. Born the son of a London banker, he was baptized in the Anglican church, began studies in Oxford at the age of 16, and was ordained an Anglican priest. After joining the Oxford Movement he sought to recover Catholic aspects within the Church of England but in 1845, putting aside his academic career, he decided to convert to the Catholic church and subsequently spent the last 40 years of his life as a parish priest in Birmingham, caring for the poor and writing works that have had a major impact on Catholic theology, including in the Second Vatican Council. Leo XIII made him a cardinal, but he never became bishop. Benedict XVI beatified him in England in 2010.

A special delegation from Anglican Communion came for Newman’s canonization and, at the end of Mass, Francis publicly thanked them for their presence.

St. Dulce Lopes Pontes, often referred to as the Brazil’s Mother Teresa of Calcutta because of her great care for the poor, was born into a well-off family. She felt attracted to minister to the poor from an early age and joined the Missionary Sisters of the Immaculate Conception of the Mother of God and devoted herself to the education of workers and care for the poorest. She founded the largest charitable organization in Brazil that today includes a teaching hospital and educational center which provides free education for very poor children. She died in 1992 and when the cause for her canonization started when her body was found incorrupt. Benedict XVI beatified her in 2011.

St. Mariam Thresia was an Indian mystic who cared for the poor, the sick and lepers. She experienced visions and ecstasies and received the stigmata at the age of 33. Five years later, in 1914, she founded the Congregation of the Holy Family to care for families. Today it numbers some 1,500 sisters in communities around the world that care for families and run hospitals and schools. St. John Paul II beatified her in the year 2000.

St. Giuseppina Vannini is reportedly the first Roman woman to be canonized in over 400 years. She lost both her parents by the age of seven and grew up in an orphanage near St. Peter’s Basilica run by the Daughters of Charity. She wanted to join that religious congregation, but after being rejected due to her poor health, she then went on to found the Daughters of St. Camillus to care for the sick. Her order has today 800 sisters working in 22 countries. St. John Paul II beatified her in 1994.

The fourth woman, St. Marguerite Bays, was a laywoman mystic from Switzerland. She was a seamstress and dedicated herself to work in a parish and care for her family. She was miraculously cured from bowel cancer, but went on to suffer for Christ as she had requested and regularly experienced the stigmata during the rest of her life. St. John Paul II beatified her in 1995.

He was a Christian, a pastor, a priest, a preacher, a teacher and much more; do not damn him with faint praise by calling him a theologian.
The teeming crowds at his funeral were not there because they were theology aficionados, they were acknowledging having real human encounters with a holy man.

that lead photo is fantastic--look at the way the statues are oriented towards Newman!