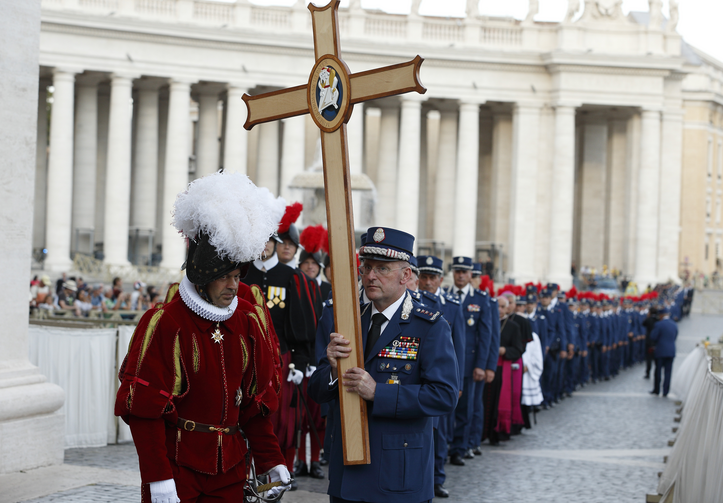 Pope Francis has appointed Gianluca Gauzzi Broccoletti, a cybersecurity expert, as the new head of the Vatican Security Services and commander of the Gendarmerie, the Vatican announced today. An expert in information and cybersecurity, he has been the deputy chief of both entities since 2018 and served as the number two to Commander Domenico Giani, who resigned yesterday.

The 45-year-old Italian, widely known as Gianluca Gauzzi, was born in Gubbio, central Italy, and graduated from Rome’s La Sapienza state university with an engineering degree in the field of security and protection. A married man with two children, he joined the Vatican’s Gendarmerie at the age of 24. Four years later, in 1999, according to the Vatican statement announcing his appointment, he became responsible for the planning and development of the city-state’s networking and security infrastructure and cybersecurity.

He was transferred to the Operations Center of Security in the Vatican in 2010, and the statement said he gradually gained positions of increasing responsibility until he became deputy chief and deputy commander of the Gendarmerie in 2018, then headed by Commander Giani.

He takes over from Commander Giani, who resigned yesterday after taking “objective” but not “subjective” responsibility for the leaking to an Italian journalist of a reserved notice.

The Vatican revealed that “in those years he established a relationship of trust with the private secretaries of Pope Francis as well as with the top authorities of the Governorate of Vatican City State and the Secretariat of State, where competence and professionalism is required for investigations of a confidential nature.”

It said he “accompanied” the pope on “numerous” journeys and pastoral visits in Italy and various parts of the world. Moreover, he coordinated the security for the summer holidays of John Paul II and Benedict XVI and was deputy commander of the unit that guaranteed the security of Benedict XVI during the summers he spent at Castel Gandolfo. He also participated in planning security for the big events in Italy at which the pope was present. He has taken part in courses and seminars in the field of security organized by police forces in Italy and internationally.

The Vatican statement revealed that the man who now becomes Pope Francis’ main bodyguard or “guardian angel” was part of the unit responsible for managing the “technological security” of the 2005 and 2013 conclaves.

He now takes over from Commander Giani, who resigned yesterday after taking “objective” but not “subjective” responsibility for the leaking to an Italian journalist of a reserved notice informing Vatican security personnel that five employees had been suspended from their work “as a precautionary measure.” That move came after Vatican police raided four offices of the Secretariat of State and the office of the Financial Information Authority in early October.

While his nomination as successor to Commander Giani was expected, few among the media could identify his face as he had kept a low profile throughout these years. His appointment in 2018 as number two to Giani was read then in the Vatican as a strong signal that the former commander would soon be moving on, but nobody expected it to happen so suddenly or in the way it did.

Commander Giani’s resignation had a strong emotional impact on many people working in the Vatican. Many were surprised, some felt sad, and others were dispirited at how it ended.

At the same time, many Vatican officials and reporters were aware that Commander Giani had become one of the most powerful men in the small city-state and that during his 20 years of service, 13 as head of security, he had not only made many friends but also some enemies because of the surveillance and control systems he had introduced. Many, however, think that his resignation has deeper roots than the leaking of a security document to the Italian press, and this conviction has given rise to much conjecture. The Italian media speculate, without providing proof, that other resignations or dismissals could follow before the investigation into the questionable financial operations involving, it seems, real estate in London, is concluded.

For his part, the new security chief, Commander Gauzzi, will face his first major challenge when Pope Francis visits Thailand and Japan in the second half of November. He will then come under the media spotlight he has so far avoided.