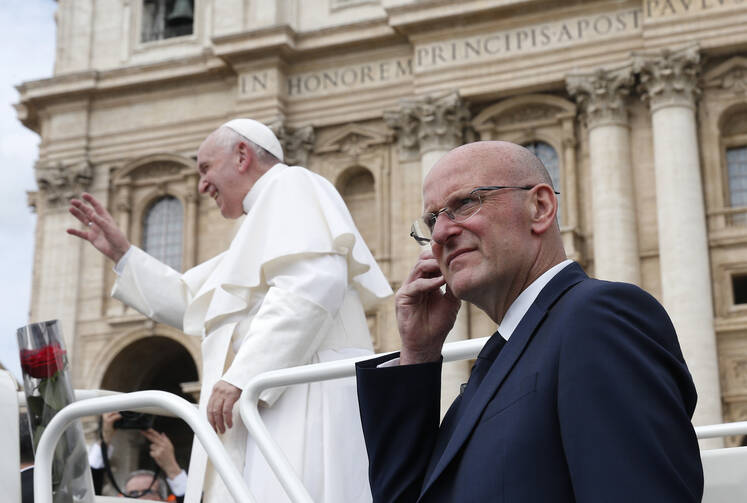 Domenico Giani, lead bodyguard for Pope Francis and head of the Vatican police force, keeps watch as the pope leaves his general audience in St. Peter's Square at the Vatican May 1, 2019. Pope Francis accepted the resignation of Giani Oct. 14, nearly two weeks after an internal security notice was leaked to the Italian press. (CNS photo/Paul Haring)

Pope Francis has accepted the resignation of the head of the police and security force of Vatican City State, Commander Domenico Giani, as a consequence of his inability to identify the source of a leak related to recent financial investigations in the Vatican. Since June 2006, Mr. Giani had led the Vatican’s Gendarmerie and served as the chief bodyguard of Benedict XVI and then of Pope Francis.

The news had already been circulating in the Italian media on Sunday, and the Vatican confirmed it in a statement on Monday afternoon, saying that Mr. Giani had offered his resignation “out of love for the church and faithfulness to Peter’s successor” and Pope Francis accepted it. It also noted that he “bears no responsibility in the unfolding of the events.”

The first indications of the events that would lead to Mr. Giani’s resignation came late last Saturday evening when Vatican spokesman, Matteo Bruni, announced that Pope Francis had ordered an investigation into the leaking of a notice signed by Mr. Giani to a journalist of the Italian left-wing weekly, L’Espresso, who specializes in Vatican financial affairs.

The leaked notice had been distributed on Oct. 2 to all members of the Vatican security forces. It revealed that the Vatican City State’s prosecutors had, “as a precautionary measure,” suspended five Vatican employees. The suspension of these five officials, all Italians, followed raids by the Vatican police on two Vatican departments, following the instructions of Vatican prosecutors which the pope had approved.

Four of the suspended employees worked in the first section of the Vatican’s Secretariat of State, which handles the general affairs of the church. One of these, Monsignor Mauro Carlino was the former secretary of Cardinal Angelo Becciu, who had headed the first section from 2011 to 2018. The fifth, Tomasso di Ruzza, was a lay senior official in the Vatican’s financial information authority, which, among other responsibilities, plays watchdog role over financial transactions to prevent money laundering.

The notice of their suspension, which also restricted their entry to Vatican territory, was signed by Mr. Giani. It carried the names and photos of the four men and one woman and some suggested that it resembled the “wanted” posters of the Wild West. The leaked notice was first published in the website of L’Espresso, the Italian weekly, within a surprisingly short time after it was signed and posted within the Vatican. It was then rapidly picked up by Italian and international media and circulated on social media. Some Vatican officials and Italian media described the leak as a “mediatic lynching” of persons under investigation, but who had not yet been charged or convicted.

Pope Francis, who sources told America was deeply upset by the publication of such defamatory information, had ordered an immediate investigation to find the person responsible for the leak.

Today’s Vatican statement announcing his resignation said “this publication was prejudicial to the dignity of the people involved and to the image of the Gendarmerie” and that Mr. Giani had resigned “in order to assure the proper serenity to the ongoing investigation, coordinated by the Promoter of Justice and carried out by the Gendarmerie, since the perpetrator of the external circulation of the order—reserved to the staff of the Gendarmerie and of the Pontifical Swiss Guard—remains unknown.”

Pope Francis, who sources told America was deeply upset by the publication of such defamatory information, had ordered an immediate investigation to find the person responsible for the leak. Various sources confirm that he summoned Mr. Giani, who is in charge of the more than 130 members of the military-trained Vatican Gendarmerie, and asked him to find the culprit or else to take personal responsibility for what happened. The commander did not come up with the name of the person responsible and instead handed in his resignation.

Mr. Bruni, the Vatican spokesman, confirmed in response to a question from ANSA, the Italian state news agency, that Pope Francis had ordered the investigation into the leak, saying that the pope had described the matter as “comparable to a mortal sin because it is injurious to the dignity of persons and of the principle of the presumption of innocence.”

Mr. Giani told America on Friday, Oct. 11, “I had nothing to do with it,” referring to the leak. Italian media also assert that he was not responsible for the leak, but since he has overall responsible for vigilance and security inside the Vatican City State, he felt he had no alternative but to hand in his resignation. It should be noted however that his resignation does not answer the question as to who leaked the notice.

Despite reports in Italian media that he had resigned, Mr. Giani was still functioning as the pope’s main bodyguard on Sunday at the Mass for the canonization of the five new saints and afterwards as the pope greeted people. But, Corriere della Sera reported on Monday, Oct. 14, that after the Sunday Mass the commander had informed the Gendarmerie that his resignation had been accepted, and he would step down.

The Vatican statement made clear that Pope Francis was grateful for Mr. Giani’s service and willingness to take responsibility, calling his resignation, “an expression of freedom and institutional sensitivity, which honors Commander Giani and the work he has carried out with humility and discretion in the service of the Petrine Ministry and the Holy See.” The statement also recalled Mr. Giani’s “twenty years of unquestionable faithfulness and loyalty” and said that the pope thanked him for his “extreme competence” and “undisputed professionalism.”

For the past 13 years, Mr. Giani, 57, referred to as “the pope’s guardian angel”, he accompanied first Benedict XVI and then Francis on all their travels, both within Italy and internationally. After graduating from university, Mr. Giani, a married man with two children, first joined the Italian police force, then moved to the financial police and later the intelligence services. He has headed all the major security operations within the Vatican City State since June 2006 including those related to Vatileaks under Benedict XVI (the leaking to the Italian media of confidential documents and the betrayal of Benedict XVI by his butler, Paolo Gabriele) and the Vatileaks II passing of financial documents that led to the prosecution and detention of the Spanish monsignor, Luis Angel Vallejo Balda. He also arrested the Italian Vatican official, Monsignor Nuzio Scaranno for illicit financial operations. He saved Benedict XVI twice from two attacks by a Swiss-Italian woman, Susana Maiolo, at Christmas ceremonies in St. Peter’s Basilica, December 2008 and 2009. He was responsible for the Vatican’s security forces joining Interpol, and he has cooperated with the intelligence and security services of many countries in relation to papal travels, including the F.B.I. and CIA.

Protecting friends of corruption in high places is also a mortal sin. The "calumny" defense has been worn out and replaced by the "comparable to a mortal sin" defense.