Pushback at The Synod on The Family 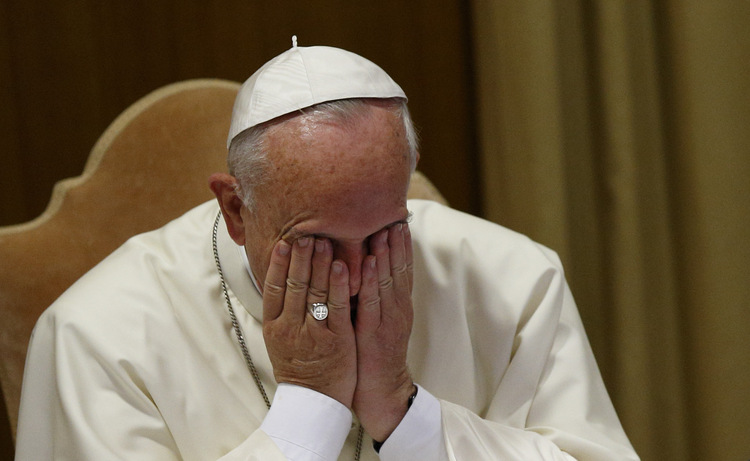 While very many synod fathers warmly welcomed and appreciated the midway report presented by the Relator General, Cardinal Peter Erdo, on Oct. 13, a significant number expressed serious objections to parts of that interim text, both in terms of content and style. That text sought to summarize the rich and often heated debate inside the synod hall during the first week, but the day after the report was presented there was an evident attempt at pushback.

Many were upset by what they charged as the media’s misrepresentation across the globe of the synod report’s openness to homosexuals in particular, but also regarding cohabitation and irregular marriage situations. Most of the media had presented all this as reflecting a seismic shift in the church’s teaching on these questions whereas, in actual fact, the text is still a provisional document and has not been approved by the synod or by the pope. Other participants felt the church’s teaching was presented in a confused or inadequate manner in that text, and called for clarifications.

The reaction to the media’s reporting was so strong among synod fathers that the Secretary General, Cardinal Lorenzo Baldisseri, asked the Director of the Vatican Press office to explain to the press that the text is “a working document that summarizes the interventions (speeches) and the discussion of the first week and is now proposed for discussion by synod participants in the small (language) groups.”

South Africa’s Cardinal Wilfrid Fox Napier, O.F.M., gave vent to that reaction at a lively press briefing in the Vatican, Oct. 14. When asked if the synod, in the light of media’s presentation of the report’s statement on homosexuals, would now rework the text in a more restrictive sense, he replied that the problem is that the story is out there and is difficult to retract: “We’re now working from a position that is virtually irredeemable. It’s not what we were saying (in the synod hall). It’s not a true message!” Many reporters that had assisted at the peport’s presentation the previous day were surprised by his remarks.

Asked whether his comment about “not a true message” referred to the media’s presentation or to the text itself, he confirmed that it was mainly the former, but said it also included the latter to some extent. But then he backtracked a little and admitted that the report actually contained “a lot of what was actually said [in the synod hall].”

The Franciscan cardinal felt church teaching is not presented clearly enough in the text. He also thought the expectations of the Synod were “perhaps a little unrealistic” and said the media misinterpretation may be reflecting what people would like to happen. He said he was surprised that the interim report had been made available to the media, even though this had been normal praxis at past synods that he had attended.

Cardinal Napier said his comments reflected the views of English language group ‘B’ of which he is the moderator. He expected his group to “sharpen” the vision of the report and modify a number of statements in it. There are 18 synod fathers in that group including Archbishop Diarmuid Martin (Dublin), its Rapporteur and Cardinal Timothy Dolan who said in a radio interview, “It’s not the final word and we have a lot to say about it.”

The Italian cardinal, Fernando Filoni, moderator of Italian language group A, who was with Napier at the press briefing, said he was “satisfied” at the general scheme of the report, but he said his group too were surprised by what the media reported. He expressed reservations on parts of the report, and confided to a colleague that he could not approve the text in its present form. But he added, this is “a working document,” and the synod is seeking to perfect it so as to offer a good result to the pope. He acknowledged that that “expectations are high” because the church is placing the needs of the family at the center of attention, and said that was understandable.

Inside the synod hall a number of serving Vatican cardinals including Burke, Muller, Ouellet and Pell expressed objections to the interim report; they are firmly opposed to the admission of divorced and remarried Catholics to communion, and also have other objections. The Italian Cardinal Carlo Caffara shares their view on the divorced and remarried, and like them considers it as a betrayal of fundamental principles.

Cardinal Burke also charged on more than one occasion that the media is somehow “manipulating” the story of what is happening in the synod hall by only reporting one side, but it was not easy to make that charge stick given the amount of coverage he is receiving.

Significant opposition to the interim report’s opening on the question of the divorced and remarried, as well as on the question of homosexuals, is also reported to come from a number of Central and Eastern European bishops. Particular unease, not to say disagreement, on the text was voiced on Vatican radio, October 13, by Archbishop Stanislaw Gadecki, the President of the Polish Bishops’ Conference, who charged that the interim report departs from the teachings of John Paul II. He asked whether the purpose of the synod’s pastoral effort should be to assist good, normal families who are struggling to be faithful amid difficulties or to study “special cases.”

He disputed the report’s use of “the criterion of gradualism,” and questioned whether one can really treat cohabitation as a gradual step on the road to holiness. He pointed to the omission of any reference to sin in the text and underlined the need to present the truth. He charged that the report gives the impression that past church teaching lacked mercy, and implies mercy only begins now.

The 191 synod fathers are now discussing the interim report in the 10 language groups, and are approving amendments to that text. It is unclear at this stage how extensive the opposition is to the interim report, and so at this stage it is difficult to assess how substantial the changes will be to the original text. There are sure to be some changes, but it looks unlikely that the whole tone of the document will change.

The work of redrafting the Final Report, by taking on board the amendments and proposed improvements, is the task of the General Relator, the Special Secretary, and the General Secretary assisted by the six new members appointed by Pope Francis to contribute to this important task. That final text will be approved by the synod’s plenary assembly on Oct. 18 and will serve as the Working Document for discussion on the family not only in bishops’ conferences but also in dioceses throughout the church over the next year in preparation for the October 2015 synod.

Gerard O’Connell
@gerryorome
Show Comments (
3
)
Comments are automatically closed two weeks after an article's initial publication. See our comments policy for more.
Jim McCrea
6 years 9 months ago
While wandering through that conservative Looking Glass (yet again), Cdl. Henny of Penny repeats his mantra: “When I use a word…it means just what I choose it to mean – neither more nor less.”
Tim O'Leary
6 years 9 months ago
Time will tell, but it appears that Pope Francis is mishandling this. While I can see value in the report as written, and I really do appreciate the idea of reaching out to those who have rejected major components of Church teaching, it does appear that this document does not do what it claims to do - represent all sides of the discussion, or even most of the discussion. And the press conference on the document appears to have gone badly, as bishops couldn't even explain what they were supposed to be reporting. Some governance or procedural questions? Why are the synod discussions to be secret and then this surprise interim report that appears to have blindsided most of the bishops. This can only reduce the sense of collegiality. Since Pope Francis agrees with the other bishops that no doctrine can change, and wants to find a more effective way to communicate the faith, I would hope that communication within the synod would go better. And, it was rather naive to think the secular media would properly represent the whole document when its interests do not align with faithful Catholic teaching. Oh well. We will see.
John Fitzgerald
6 years 9 months ago
I believe that what we are seeing in the media has a lot to do with expectations and existing perceptions of the Catholic Church. At least in the U.S., the Catholic Church is widely perceived to be uncaring, unwelcoming, and authoritarian. The Synod Working Document is so different in tone from most bishops and the USCB that it has exceeded expectations. We will have to wait and see what happens in a week and in a year.