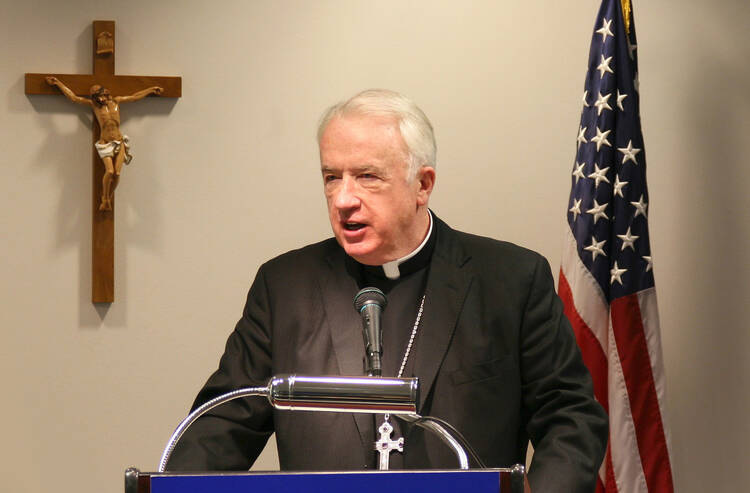 On July 19, the Apostolic Nunciature in the United States issued a statement informing the Diocese of Wheeling-Charleston that Pope Francis has decided on disciplinary measures against Bishop Emeritus Michael J. Bransfield of West Virginia, following an investigation by Vatican officials.

According to the statement, Bishop Bransfield is no longer allowed to reside in the Diocese of Wheeling-Charleston, nor is he allowed to “preside or to participate anywhere in any public celebration of the Liturgy.” Finally, Pope Francis commands him “to make personal amends for some of the harm he caused,” though the exact nature of those amends are to be determined “in consultation” with Bishop Bransfield’s official successor as Bishop of Wheeling-Charleston.

Pope Francis commands him “to make personal amends for some of the harm he caused."

Additionally, Bishop Bransfield “engaged in a pattern of excessive and inappropriate spending” of diocesan funds. This included renovations to his private residences and the purchase of expensive food, drinks, gifts and other luxury items.

In the statement made public on Friday, the Apostolic Nunciature in the United States said that the Vatican “expresses its sincere concern for the clergy, religious and laity of the Diocese of Wheeling-Charleston” through its punishment of Bishop Bransfield.

In the Church's effort to safe face, due process is being violated for sure. If a State prosecutor issued a public statment like this before a trial, how could you possibly have a fair trial?

Craig B. Mckee
3 years 2 months ago

Timing is everything!
Do you think it's just a coincidence that the Vatican released this decision on the tails of the "NOT A DIME FOR THE DIOCESE" movement among West Virginia's Catholics?
http://www.theintelligencer.net/news/top-headlines/2019/07/catholic-groups-response-not-a-dime-to-the-diocese/
God forbid such a movement go NATIONAL based on previously gathered data from Voice of the Faithful ranking American dioceses' financial TRANSPARENCY:
http://www.votf.org/2018FWGReport.pdf

It’s easy to be angry and point fingers. The better way is to suggest and work for solutions to the process and organization that allowed this to happen
The first reform that is needed is transparency and a partnership among the laity, religious, and clerics in selecting and retaining bishops. Second, there has to be reform in how dioceses are managed and administered. Again, a strong partnership is needed to provide proper oversight. Only then can the risk of such wrongdoing be minimized and, in the event it does happen, it can be promptly exposed

Wow! Bishop Bransfield made a lot of mistakes.

Such "discipline?" How do we know he does ANYTHING that the Vatican stipulated? The proper discipline is to be found in a penitentiary (and not a Roman one).

Certainly, Bransfield's conduct was despicable and reprehensible. Unfortunately, his conduct may not be indictable in a civil court. Although, if the diocese paid him back for his many "gifts,"perhaps he and the diocese may have to do some explaining to the IRS. His only punishment may well be that given out by the Pope. At least, he'll have to stay away from the kind people of "almost heaven," West Virginia.