Two bishops removed from ministry over allegations of sexual harassment 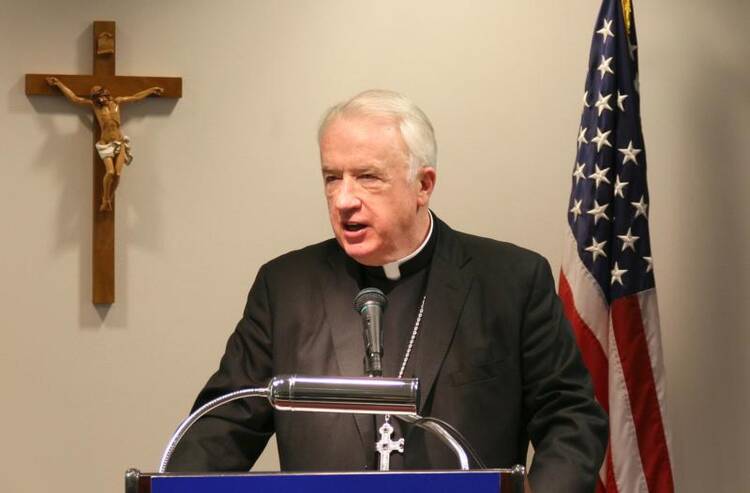 BALTIMORE (CNS) -- Archbishop William E. Lori of Baltimore announced March 11 that a preliminary investigation into allegations of sexual harassment of adults and financial improprieties by Bishop Michael J. Bransfield, formerly of the Diocese of Wheeling-Charleston, West Virginia, has been completed and will be forwarded to the Vatican for final judgment.

At the same time, the archbishop announced restrictions on the bishop's ministry.

The Vatican announced Bishop Bransfield's retirement from the diocese Sept. 13, and Pope Francis appointed Archbishop Lori as apostolic administrator, with a mandate to investigate the allegations against the bishop.

A news release from the Archdiocese of Baltimore March 11 noted that the preliminary investigation took place over five months. Archbishop Lori conducted the investigation with the assistance of a team of five lay experts.

The investigative team examined multiple allegations of sexual harassment of adults and financial improprieties, according to the news release. It involved interviews with more than 40 individuals, including Bishop Bransfield.

The restrictions are an outgrowth of a bishop reporting initiative instituted in January that governs allegations against any bishop in the Archdiocese of Baltimore, believed to be the first of its kind in the nation. The policy was created by the archdiocesan Independent Review Board at the request of Archbishop Lori.

Covered under the initiative are procedures to address potential allegations that a bishop of the archdiocese engaged in child sexual abuse or other inappropriate sexual behavior with a minor; engaged in sexual harassment or misconduct toward an adult; or engaged in activities that constitute seriously negligent supervision or an improper cover-up relating to alleged child sexual abuse by others within the archdiocese.

Although the "Charter for the Protection of Children and Young People," adopted by the U.S. bishops in 2002, mentioned only priests and deacons, Baltimore's archdiocesan policy created after adoption of the charter was always presumed to include bishops. In addition to the reporting protocol, new archdiocesan policies that went into effect Nov. 1, expressly include the bishops.

As apostolic administrator, Archbishop Lori directed the same protocols be implemented at this time in the Diocese of Wheeling-Charleston.

The March 11 news release from the Archdiocese of Baltimore also announced that as part of these protocols governing the conduct of bishops in the archdiocese, Archbishop Lori determined that similar restrictions were warranted in the case of Bishop Gordon D. Bennett, who served as auxiliary bishop of Baltimore from 1998 until 2004, when he was appointed bishop of Mandeville, Jamaica.

"Since that time, he has not resided in or received any assignment in the Archdiocese of Baltimore or the Diocese of Wheeling-Charleston," the news release said. "In May 2006, the archdiocese learned of an allegation of sexual harassment of a young adult by Bishop Bennett. Upon receiving the allegation, the archdiocese immediately reported it to the apostolic nunciature in Washington, D.C."

Bishop Bennett, who is a Jesuit, resigned from the Diocese of Mandeville in August 2006 at age 60. At the time, it was announced that he had resigned for health reasons.

Catholic News Service reported then that Father John P. McGarry, the then-provincial of the Jesuit California province (now part of the USA West province), to which Bishop Bennett is attached, said in an email to province members that Bishop Bennett "will be returning to California for medical assessment and treatment for fatigue and depression."

As a result of these restrictions, which the Vatican recently gave permission to Archbishop Lori to announce, Bishop Bennett is prohibited from exercising any priestly or episcopal ministry in the Archdiocese of Baltimore and the Diocese of Wheeling-Charleston, the release said.

Boston Cardinal Sean P. O'Malley announced similar protocols for allegations against bishops in the Archdiocese of Boston in a letter March 8.

A report in The Pilot, Boston's archdiocesan newspaper, said that since 2011 the archdiocese has used EthicsPoint, an anonymous, confidential, Web-based system for reporting concerns about ethics violations or finance improprieties. In his letter, Cardinal O'Malley said the archdiocese also will now use EthicsPoint to report misconduct by a cardinal, bishop or auxiliary of the Archdiocese of Boston.

EthicsPoint is the same system the Archdiocese of Baltimore uses for anonymous reporting of ethical, financial and other allegations against clergy or lay ministers in the archdiocese, including bishops.

In Baltimore, allegations against a bishop are first reported to two members of the Independent Review Board who are both retired judges, Joseph F. Murphy and Ellen M. Heller.

The new protocols are designed to bolster the commitment of the Archdiocese of Baltimore to zero tolerance for any bishop, priest, deacon, employee or volunteer credibly accused of sexual abuse.

In addition to the third-party reporting system and reporting allegations against bishops directly to members of the review board, Archbishop Lori has implemented additional measures to ensure these goals, including:

Bransfield had been implicated in 2012 in an infamous Philadelphia priestly sex abuse case, but he denied ever abusing anyone and claimed vindication years ago. In September, the Vatican announced the Pope accepted Bransfield's resignation and appointed Lori to temporarily take over the Wheeling-Charleston diocese. Lori was also instructed to investigate sexual harassment allegations against Bransfield.

A Catholic high school in Wheeling, West Virginia, voted recently to remove Bransfield's name from a gym. His name has also been removed from a care center at Wheeling Hospital.

Bennett served in Baltimore from 1998 until 2004, when he was appointed Bishop of Mandeville, Jamaica. In 2006, the archdiocese said it learned of an allegation of sexual harassment of a young adult by Bennett in Jamaica and reported it to the Apostolic Nunciature in Washington, D.C. Bennett resigned a few months later.

Bennett was cleared of the sexual harassment allegation in 2009 and reinstated to limited episcopal ministry subject to oversight, the Jesuits' USA West province said in a statement Monday. But amid ongoing questions about how misconduct allegations were handled in the past, Bennett's case was re-examined last year and the Congregation for Bishops in Rome recently determined he shouldn't exercise episcopal ministry, the province said. The future of his priestly ministry is up to his Jesuit superiors.

Correction, March 14: The original title of this article incorrectly identified the two bishops who have been removed from ministry as from Baltimore. Only one of the bishops, Bishop Gordon Bennett, had been assigned to Archdiocese of Baltimore, and he was last there in 2004.

A Fielder
3 years 10 months ago

... probably because those lists only include those credibly accused of misconduct with MINOR CHILDREN. Ordained leadership is trying desperately to limit the conversation to those criminal offenses, pretending that there is nothing to see anywhere else. Sexual harassment (and assault) with adults will be an entirely new can of worms. McCarrick and Bennett are just the beginning. If bishops and cardinals think they can get away with this, can you imagine how their priests, deacons and seminarians behave?

first and best use I have heard of so far of an independent lay review board--could be a model for all the other dioceses to follow. Also means that the lay investigators are not hobbled( like bishops) by any oath of secrecy and silence to the Vatican. Why has Pope Francis not yet eradicated this practice? The way Baltimore is implementing its inquiries to the point of "credible allegations" also means that the rule of due process are being observed and not ignored. Good work Lori!

Thanks for your post. I have been thinking about Baltimore bishops a very comparable post over the last couple of weeks, I’ll probably keep it short and sweet and link to this instead if that’s cool. Thanks.