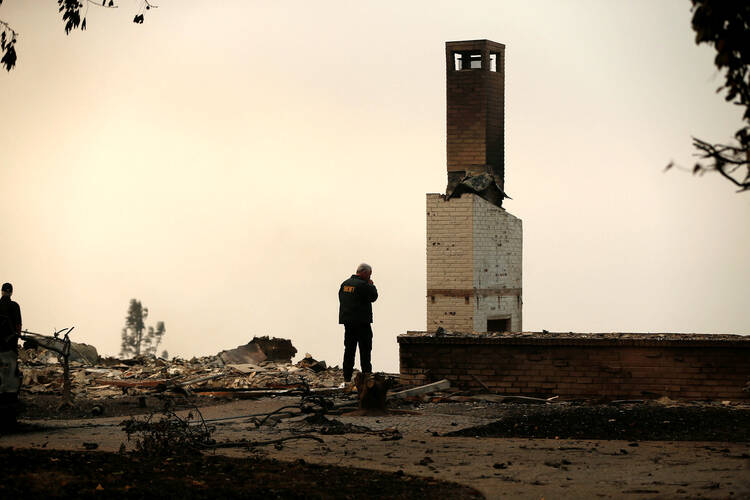 A Butte County Sheriff deputy surveys a home Nov. 11 that was destroyed by the Camp Fire in Paradise, Calif. Catholic schools in the Diocese of Sacramento are opening their doors to all students displaced by the fires to attend their schools tuition free for the rest of the year. (CNS photo/Stephen Lam, Reuters)

Today the bishops of the California Catholic Conference released a new pastoral letter, “God Calls Us All to Care for Our Common Home,” which “proposes a practical application of the ‘Laudato Si’ message of ecological spirituality” to the particular context of California.

In the four years since Pope Francis released his encyclical “On Care of Our Common Home,” both global and local reporting on the effects of climate change has only gotten more dire. Earlier this month a think tank based in Melbourne, Australia released a study suggesting humanity faces a “near to mid-term existential threat” to its very existence in 30 years’ time. Recent articles about California have contemplated a fire season that never ends as well as mounds of filth and growing disease in various parts of Los Angeles caused in part by rapidly rising homelessness. More than a million Californians are exposed to unsafe water each year, over half of them in the San Joaquin Valley, which is one of the most important, productive and diverse agricultural regions in the world.

Framed around earth, fire, water and air, “God Calls Us All” acknowledges many of these crises. “Firestorms now explode across our landscape with more intense and longer-lasting winds, literally burning through our state,” the bishops write. “The unprecedented scope and harm of wildfires across California gives notice that something in creation is awry.”

‘Laudato Si’’ calls us to ecological conversion. What does that look like?
William Critchley-Menor, S.J.

This 1,200-year-old Benedictine monastery has been ‘carbon-negative’ for 20 years
Renardo Schlegelmilch

Likewise, more than half the state’s population is dependent for its water supply on rain or snowpack hundreds of miles to the north. “Our current infrastructure was designed for a stable climate, which we no longer have,” the bishops say. Meanwhile “shortsighted land development practices and policies further the loss of farm and wild lands— without adequately addressing our shortage of more than half a million low-income housing units.”

Some of these issues, the bishops note, likely already have permanent consequences; “a changing climate might make some parts of our state unsafe to inhabit.”

And yet “God Calls Us All” resists the use of fear as a motivation. Keith Warner, O.F.M., is the senior director of Education and Action Research at Santa Clara University’s Miller Center for Social Entrepreneurship and a member of the bishops’ committee on environmental stewardship. He calls attempts to scare people into conversion “a structural flaw in modern environmentalism.”

“I’m not saying it’s not borne out by the evidence,” he says, “really really bad things are happening and are going to continue to happen. But ‘Abandon hope all ye who enter here,’ ‘Turn or Burn,’ that doesn’t work.

“You can’t get to love, if you start from fear.”

In the four years since Pope Francis released his encyclical “On Care of Our Common Home,” both global and local reporting on the effects of climate change has only gotten more dire.

Following the pope’s example in “Laudato Si’,” the bishops instead look to the extraordinary and widespread natural wonders of California itself to bring about change in people’s hearts. “California has been blessed with great beauty,” the bishops write, “and through this, God is revealed. We need only look around, take the time to contemplate our world to begin a process of conversion.”

Behind this approach, says Brother Warner, is the understanding that what is needed right now is not more data or better arguments; such approaches “fail to inspire and don’t get us where we need to go,” to what the document refers to as “the moral and religious renewal of humanity.”

For the bishops that renewal is about transformation: “Conversion is not just turning back to God, but always embraces new thinking and new decisions—a new way of life as we move into the future.”

“Changes in lifestyle, policy, and economics are absolutely necessary,” the bishops write, “but ‘Laudato Si’’ calls for more.” And an essential element of that is an understanding that the only way forward is together. “Californians as a whole will have to actively work together, in solidarity” with one another and the state’s most vulnerable, the bishops say again and again in the document.

The latter part of the document takes that a step further, addressing specific groups, such as teachers and parents, liturgists, artists, business leaders and young people, and proposing ways they can each contribute to our shared moral renewal. “Initiate conversations with those adults older than you about your concerns for environmental protection and a more inclusive society,” the bishops encourage young people. To artists, entrepreneurs and other innovators, they suggest: “Find ways to highlight the beauty of creation in your work and to inspire a culture of care in the human family.”

“Changes in lifestyle, policy, and economics are absolutely necessary,” the bishops write, “but ‘Laudato Si’’ calls for more.” And an essential element of that is an understanding that the only way forward is together.

In the face of the portrait of doom being presented elsewhere in the press, these practical steps offer a quiet, matter-of-fact radicality. “There’s a moral paralysis that is often perceptible in [conversation about] environmental issues,” argues Sacramento Bishop Jaime Soto, president of the California Catholic Conference. “It’s pervasive in a lot of other issues pressing upon as well. Many Americans feel alienated from the political process and as a consequence they have a very dismal and skeptical attitude.

Bishop Stephen Blaire of the Diocese of Stockton, who spearheaded the conference’s efforts to write this pastoral letter and died after a long illness on its very day of publication, exemplified this practical, hope-filled approach to environmental issues. “As a Central Valley bishop, Bishop Blaire felt many of these environmental issues very personally,” says Bishop Soto. Fire hazards, water issues, air quality, labor issues, pesticides—“the diocese of Stockton is at the crux of many of the environmental challenges of California.”

Brother Warner remembers the first time he met Bishop Blaire. “He had convened a meeting of some interested parties to kick off the environmental justice initiative. And he started with Bible study, an exegesis of Genesis and what that meant for the church today. And it wasn’t deep theological probing of the Hebrew [Bible]. It was ‘This is the Scripture, this is what it says, we’re not doing it, we need to do a better job, this is our calling as church.’

Over 15 years ago Bishop Blaire began an environmental justice initiative to educate and empower the people of his diocese. “This was his vision, “ says Brother Warner, “that everyone can do something to make a difference, and this is what we should present to the people of California.”

“A moral renewal of humanity is a tall order,” he acknowledges. “But it’s happened before in human history and it can happen again. And it’s really the only solution.”

Is Laudato Si a bad encyclical? Now that the Jesuits are on record that past encyclicals have been bad, should this one get scrutiny?

As Dinesh D'Souza has quoted his Indian uncle, USA is the land where the poor people are fat and that's why he wants to migrate there.

Christians could be urged to demonstrate that avoiding gluttony leads to good body size, greatly increased quality of life and increased longevity.
Walking or cycling instead of driving when travelling locally would be a good idea and voting for local administrations to permit mass transit to replace individual car use and ownership.
Rebuilding and extending the wonderful network of railways bought up and closed down by the oil industry could be licensed and encouraged at a local level with national standards firmly established. Bulk movement of goods and stores and primary produce is then very economical and could even be solar powered.
Genuine reclamation and recycling is a no-brainer.
Water collection and processing and storage will have to face down the anti-human environmentalists to get catchment areas and dams enabled against the objections of nature worshippers.

Building construction, heating and cooling and waste disposal has the potential to make enormous progress in saving energy and establishing durability.
Fashions in architecture, home decoration and clothing must me modified in the individual - what a scandal that some people have 4 brand new sets of outfits every year.
That is gluttony, envy, jealousy and sloth undermined. Any more suggestions that are not monomaniac carbon pollution reduction?

Why not reinstate traditional abstinence from meat on all Fridays of the year rather than allowing Americans to substitute another penance instead? Meat eating is a huge environmental burden. This change would please those who care about the environment, and help to rebuild some sense of Catholic identity has been lost.

The bishops ought to consider reinstating the Ember Days as well for the same reasons as above. Perhaps even encourage abstinence from meat on Wednesdays as well as the Early Church did and much of the East still does!