This 1,200-year-old Benedictine monastery has been ‘carbon-negative’ for 20 years 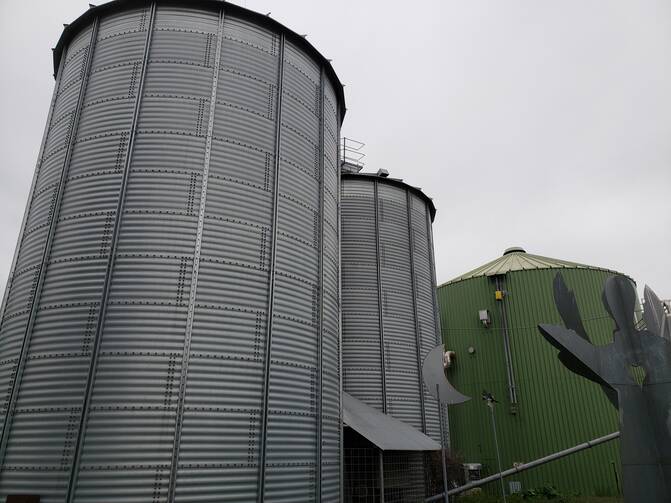 Not your usual church steeples: the biogas plant at Munsterschwarzach Abbey. Photo by Renardo Schlegelmilch.

“Integrity of creation” should be one of the top priorities for every Christian, Pope Francis said in his encyclical “Laudato Si’” in 2015. A couple of Benedictine monks in Germany have been far ahead on this demand. The Munsterschwarzach Abbey in Bavaria is not only Europe’s first carbon-neutral monastery, it has actually been carbon negative—that is, its activities have a net effect of removing carbon dioxide from the atmosphere rather than adding to it—for nearly 20 years now.

Visiting the small Bavarian town of Munsterschwarzach, the large Benedictine abbey is ever present. The four towers of the abbey church rise above the rolling green hills and deep forests that surround it. The abbey is visible from just about anywhere in the area.

But there are two new towers you might not expect next to a church—metallic, cylindrical and almost as tall as the church. The monks have their own biogas plant, fed by corn and agricultural waste from the Benedictines’ own fields. The natural process of rotting biomass produces heat and gas, which is converted into energy. It is a rather smelly process but one that saves the monastery thousands of gallons of fuel oil. It produces more than enough electricity for the abbey’s 100 brothers and about 300 employees.

The monks have their own biogas plant, fed by corn and agricultural waste from the Benedictines’ own fields. The natural process of rotting biomass produces heat and gas, which is converted into energy.

The monastery has more than 1,200 years of history. Its so-called eco-project was established in 2000—years before politicians or the German public began to worry about climate change or global warming. “We’ve been living here for a millennium, and we want to lay the groundwork for brothers to live here for another millennium as well,” says Christoph Gerhard, O.S.B. He is the monastery’s cellarer, the Benedictine equivalent of C.E.O.

These past two decades the abbey has transformed into an energy-efficient, highly modern economic powerhouse. Everything at the abbey—residences, a goldsmith, bakery, printing house—is supplied with energy flowing not only from the biogas plant but also through solar panels and from windmills in the northern flatlands of Germany. All this sustainable capacity has been driven by Benedictine spirituality, said Father Christoph.

The foundation of the monastic life is the “Rule of Benedict,” which structures the day-to-day life of the brothers, and its best-known counsel, “ora et labora,” “pray and work.” The monks used one of the more specific chapters on craftsmanship from the rule as the rationale for their eco-efforts. “We monks are supposed to see the holiness in everyday things, in the tools of the workshop as well as the tools of the altar,” said Father Christoph. “One of the most important tools of modern times is energy, so we’re actually encouraged [by the rule] to switch to renewable power sources.”

One of the newest acquisitions at the abbey is an electric car. Most of the time the car is used for shorter trips around the monastery. It has been powered by solar panels on the roof of its garage, but the technology does not yet provide reliable and efficient methods for re-charging away from the abbey.

Their-called eco-project was established in 2000—years before politicians or the German public began to worry about climate change or global warming.

The Benedictines’ various eco-projects have recently attracted a lot of attention from European media as climate change and sustainable energy have become big issues among the German public. Europe’s latest election witnessed increasing support among voters for green parties, and in Germany, the Greens earned second place.

European high school students have been walking out of their classrooms each week to protest inaction on climate change. These “Fridays for Future“ protests started in Sweden. The European mindset has accepted ecological responsibility, it seems. But back in 2000, when the monks started with their efforts, this was not the case. People were more skeptical and even suspicious of the monks’ efforts. “Times have changed,“ Father Christoph says. Now everybody contemplates sustainability.

To see their newest project, you have to visit the monastery’s bakery. Townspeople and children from local schools come here each day, many of them buying coffee and hot beverages. Since May the bakery has been combating plastic trash. It implemented a deposit system called “re-cup.”

Every customer can buy, or rather rent, a coffee cup for one Euro. Next time they come to the bakery they can switch it out for a new one. The bakery washes the used cups then puts them back into circulation.

This means less trash in the cans but more work for the bakery. “Most of the work though is to establish the system with our customers,” says chief baker Leo Stockinger. “It is worth it though; everybody has to play their part in saving the environment.“

Even though they had the option to switch to bamboo or sugarcane cups, the monastery’s bakery staff decided to use a sturdier kind of plastic. How is this environmentally sustainable? Aren’t they supposed to avoid plastics? Yes and no.

“It’s all about the right measure,” Father Christoph explains. “We Benedictine monks see moderation as the answer. Bamboo has to be imported and does not compost as easily. It also doesn’t stay in use as long as plastics. We try to not to be militant about our environment, but doing nothing at all definitely isn’t the right answer either; moderation is.“

The abbey accomplished its first big environmental goal more than 10 years ago: a negative energy balance. They produce more energy than they use and sell it back to the community. Even more impressive though: They have become carbon negative. With all of their efforts they use up more CO2 than they produce.

So is this way of life a model for the rest of society? “You simply cannot just think election to election,” says Father Christoph. “We monks think in decades, centuries. We live together and care for each other.

“I know that I will live here in 30 years; that’s a different kind of motivation. Our society still has to learn this. If you want to care for the environment, if you want to cherish the integrity of creation, you have to broaden your horizon,” Father Christoph says. “Think bigger.” 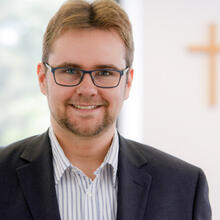 Renardo Schlegelmilch is a freelance journalist and author based in Cologne, Germany. He works for Vatican Radio among other publications.

To understand the effect of solar and wind mills on the environment see bit.ly/2Iryhoe

It's not so straight forward as the article implies. Also how transferable is the Abby technology to the world? Does it emit any gases?

Great article, but with respect, the cellarer is not the equivalent of a CEO. The head of a Benedictine abbey—in every respect, spiritual and material—is the abbot.

The cellarer is responsible, typically, for the material welfare of the monks. This begins with the supplies needed to feed and clothe the monks and conduct the life of the monastery. In the modern world it also usually means care for the buildings, grounds, library, liturgical and office supplies, and business ventures as well. Perhaps a better analogy would be chief operating officer, except the cellarer’s job excludes important parts of “operating”: the spiritual life of the monks, educational operations (a school or college at the abbey), liturgy, spiritual formation (postulants, novices, and professed monks still in education), spiritual life & guidance of the monks, supervision of external ministries (parishes and the like). Usually there is also a separate treasurer, who is likely to be a peer of the cellarer. And often both of them might report directly not to the abbot but to the prior, who is more or less the abbot’s “prime minister.”

So—cellarer is not analogous to a CEO.

I believe this brother nails the problem on its head. It used to be companies and people lived and planned their lives based on a future for themselves and for others. Companies are more volatile in their success due to no one in management being concerned for the distant future of the company so every decision is concerned with today's bottom line. Strip everything down, use weak products which break more often and just toss them when they fail you. If it makes the bottom line look good today but represents obvious self destruction in the future, do it anyway. - you won't be there when the company collapses.

We treat our planet this way too and it is immoral. We take and manipulate nature and show no respect. Now our food is genetically less nutritious from being modified so we eat till we are obese but never feel full. Our water has been needlessly polluted along with the air we breathe. How dare our planet not accept the abuse of man and continue on unaffected.

No maths is included, so no evidence has been produced to believe that the total output of carbon dioxide put into the atmosphere by the current practices is less than would be the case under other circumstance so it is just "my dad can beat your dad", so there.

Biogas when burned, releases CO2. Where did the stuff which fermented a small percentage of its organic material to gas come from and what amount of energy was used to get it on site to use?
There are 400 humans eating and drinking and breathing. Was any of that put into the debit or credit side of the ledger?
So much for a cute me-too puff piece.

Now to the real issue.

The whole of the changes of climate of the globe as a singe unit are independent of the existence and behaviour of man. Local ecosystems with micro-climates can indeed be altered or damaged by human activity, an example in Australia was the clear felling of trees to raise horses, sheep and cattle - drastic erosion and soil loss resulted. We know how to raise more of these on the same lands without doing that kind of damage now and we are doing so, those who do not go out of business, Some damaging human behaviour can sometimes be reversed, repaired or turned to benefit. This is about patches of the surface of the planet tiny in comparison to the whole globe.

We are NOT going to boil life off the face of the planet by using fossil carbon based fuels which were in the air ages ago and were buried within geological time. They contain saved sunlight power.

The science of the carbon cycle is complex. We are made of it, our food is made of it, our clothing is made of it, our dwellings are made of it - it is absolutely vital for living organisms.
The world is currently just moving off the edge of a fatal famine of carbon dioxide for all plants and other organisms using it to process it by the energy of sunlight into organic material and oxygen. We are returning the blessing of the earth in sustaining us by releasing what has been locked deep down until now.