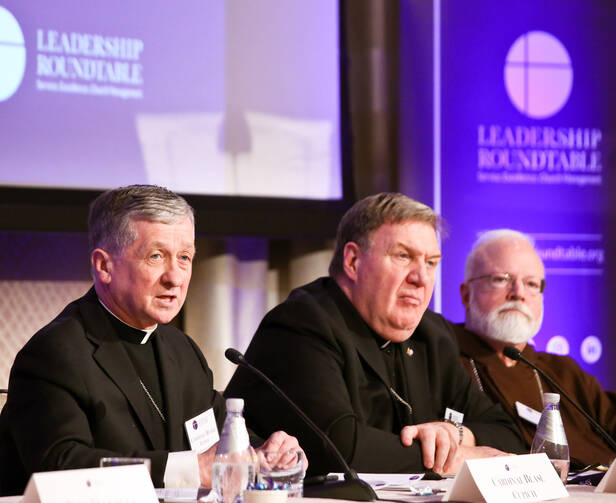 Bishops meeting in Baltimore this week to deliberate new protocols aimed at holding themselves accountable for managing sexual abuse by priests are facing skepticism from U.S. Catholics, who believe the crisis is ongoing and in need of better management.

A poll released Tuesday by the Pew Research Center found that 69 percent of U.S. Catholics believe the clergy sexual abuse scandal is “an ongoing problem.” Non-Catholic Americans are more likely to think the sex abuse crisis is still an issue, with 81 percent saying they believe it is a continuing crisis.

A poll released Tuesday found that 69 percent of U.S. Catholics believe the clergy sexual abuse scandal is “an ongoing problem.”

The crisis appears to be taking a toll on how active Catholics are in their faith lives. More than a quarter of U.S. Catholics, 27 percent, say they have scaled back on how frequently they attend Mass, while 26 percent say they have reduced their financial contributions to their parishes or dioceses. The numbers are slightly lower among Catholics who normally attend Mass each week, with 15 percent of that group saying they now go less frequently and 20 percent saying they are reducing financial contributions.

Still, a slight majority (55 percent) of U.S. Catholics believe Pope Francis has done an “excellent” or “good” job managing the abuse crisis. Among weekly Mass-goers, that number increases to 64 percent. Asked about “the bishops,” however, just 36 percent of U.S. Catholics give the same high marks, though that number increased to 51 percent among weekly Mass-goers.

A slight majority of U.S. Catholics believe Pope Francis has done an “excellent” or “good” job managing the abuse crisis.

The findings are similar to the results of a survey released last month of Canadian Catholics, many of whom expressed frustration at how church leaders have handled abuse.

Bishops are considering at least three proposals meant to hold themselves accountable for properly managing accusations of sexual abuse. They are similar to a new policy passed down by Pope Francis in the motu proprio “Vos estis lux mundi,” which went into effect earlier this month. Under the new procedures, certain archbishops known as “metropolitan bishops” are charged with handling investigations of claims of mismanagement.

Bishops are considering at least three proposals meant to hold themselves accountable for properly managing accusations of sexual abuse.

Critics have argued that bishops are incapable of holding one another accountable, pointing to more than 20 state and federal law enforcement inquiries into church’s handling of abuse. Just last week, a U.S. archbishop apologized for not including a list of names of bishops who received cash gifts from a now-retired bishop who is accused of misusing diocesan funds and of making unwanted sexual advances toward adult seminarians.

Archbishop William Lori of Baltimore is managing an investigation of Bishop Michael J. Bransfield, who recently was the head of the Diocese of Wheeling-Charleston, W.Va. A report in The Washington Post found that investigators discovered Bishop Bransfield had sent checks to several U.S. bishops, including Archbishop Lori. But the report that the archbishop submitted to the Vatican did not include that list of names. Archbishop Lori apologized for his actions.

When bishops met last November, they were scheduled to vote on several provisions aimed at bishop accountability. But a last-minute intervention by the Vatican delayed the vote. Church officials in Rome said they were not given ample time to review the materials, and the Vatican wanted U.S. bishops to hold off on a vote until after a February meeting on sex abuse in Rome with prelates from around the world. Bishops are expected to debate updated proposals this week and vote on the measures Thursday.

They have to manage THEMSELVES better. They've been obfuscating and avoiding painful conversations and covering for each other for a long time. If they can become honorable men that will take care of the problems that their dishonor has given birth to.

Having lost their honor, who would trust them again?

They should all resign.

On this issue the bishops and our Pope Francis have lost almost all credibility. The hierarchy has been woefully unable or unwilling to protect our youth from predatory clergy, religious and lay employees. Pope Francis, the Cardinals, and bishops should relinquish their roles in protecting children. An organizational lay institution within the Church should have complete and total oversight with full authority to protect our children. Nothing else has worked and the bishops just may regain some credibility in relinquishing their authority in these matters.

Many if not all diocese and archdiocese have outside agencies monitoring their policies.