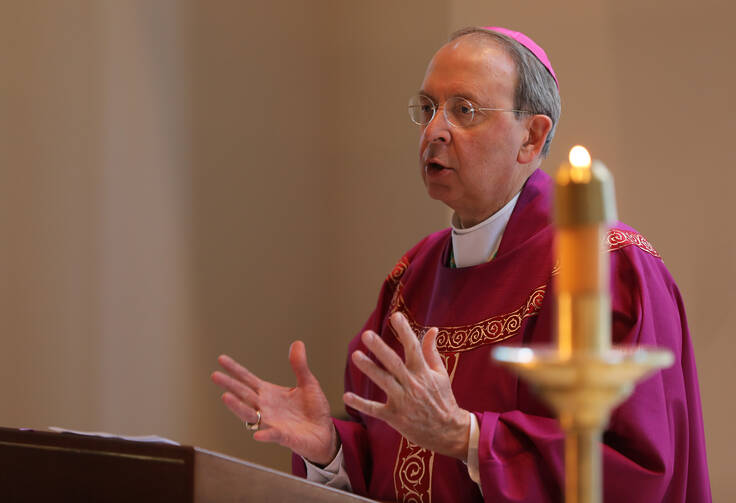 Baltimore Archbishop William E. Lori delivers the homily as he celebrates a Mass with special intentions for survivors of abuse and for abuse prevention in the chapel of the headquarters of the U.S. Conference of Catholic Bishops in Washington April 8, 2019. (CNS photo/Bob Roller)

WASHINGTON (CNS) -- After a major newspaper published a story about alleged financial and sexual misconduct by a West Virginia bishop, a prelate overseeing the investigation for the Vatican expressed regret that he redacted his name out of documents detailing financial aspects of the scandal.

In an 8-minute video released June 7, Archbishop William E. Lori of Baltimore, who was tasked with overseeing the investigation in West Virginia, said mistakes were made and one of them was redacting his name, along with the names of other bishops and high-ranking church officials who received personal financial "gifts" from the Diocese of Wheeling-Charleston's former bishop, Bishop Michael J. Bransfield.

Archbishop Lori, who was appointed apostolic administrator of the West Virginia diocese after Bishop Bransfield resigned last fall amid allegations of sexual and financial misconduct, said in the video that transparency requires admitting mistakes.

"If I had to do it over again, especially at a time when we're trying to create greater transparency and accountability, the report would have included the names of those bishops who received gifts, including my own, with some notation that there was no evidence to suggest that those who received gifts reciprocated in any way that was inappropriate."

The preliminary investigation, he said, found that allegations of sexual misconduct by Bishop Bransfield toward adults were found to be "credible" and it also determined that "during his tenure, he engaged in patterns of excessive and inappropriate spending, misused church funds for personal benefit," that included travel, liquor, dining, financial gifts and luxury goods.

"There is no excuse nor adequate explanation that will satisfy the troubling question of how Bishop Bransfield's behavior was allowed to continue for as long as it did without the accountability that we must require from those who have been entrusted with so much, both spiritual and material, as pastors," Archbishop Lori said.

The Baltimore archbishop faced scrutiny after The Washington Post daily newspaper published a story June 5 that said Archbishop Lori had been one of several bishops and high-ranking officials who had received financial gifts from Bishop Bransfield and whose named was redacted from the report.

Others the Post said had received the financial gifts included Cardinal Donald W. Wuerl, who recently retired as Washington's archbishop; New York Cardinal Timothy M. Dolan; U.S. Cardinal Raymond L. Burke; Archbishop Carlo Maria Vigano, a former apostolic nuncio to the United States; Cardinal Kevin J. Farrell, a former bishop of Dallas who is now prefect of the Dicastery for the Laity, Family and Life at the Vatican, who received thousands for matters related to an apartment in Rome, the newspaper reported.

Archbishop Lori said he has returned the amount of the gifts he received, $7,500, to the West Virginia diocese and asked that it be donated to Catholic Charities in the state.

Archbishop Lori said he was asked to oversee the preliminary investigation commissioned by the Vatican, which now has all the information that was gathered.

"Those findings go directly to the Holy See for further judgment and action of the Holy Father," he said in the video.

The Vatican has not announced what action, if any, it will take. Archbishop Lori said he could not address the matter before without permission and that was not granted "until this week." He said he is working with members of the financial council in the West Virginia diocese to assess lapses in financial control and to "revive good practices" to ensure a similar incident does not occur again.

In addition to the credible allegations of sexual harassment of adults, he said, the investigation found evidence of an "unhealthy culture that the former bishop created."

He said he was praying for the religious community affected, for the diocese's priests, deacons, laity, and religious, "for the appointment of a new shepherd for that diocese and for one that will embody Christ's spirit of humility, compassion, care and concern, and service."

"Friends, this cannot happen soon enough," he added. "We will not relent in our determined efforts to bring about the reform and renewal of the church and to restore the credibility, confidence and trust of the faithful in those of us who were charged with the awe-inspiring responsibility to lead, shepherd and, most of all, to serve with true Christ-like humility, care and concern for others."

Someone please help me understand how a bishop (in one of the poorest states in this country, at that) can get his hands on so much money and spend it on liquor, fine dining and gifts to other bishops. Apparently, there's no vow of poverty if you're a bishop. Maybe there should be.

Someone in the hierarchy needs to explain how it can be that Archbishop William E. Lori of Baltimore was tasked with overseeing the investigation when he was one of the individuals who received financial gifts. He should immediately have been removed when this came to light. It is mindboggling that he did not have the integrity to recuse himself from the onset! And it is immaterial whether he returned the monies or not.

Simple! Its a matter of you scratch my back, and, I'll scratch your b---s

How morally dense does a bishop have to be to accept a gift from the bishop of a poverty stricken state? A normal, ethical person (perhaps that by definition excludes most bishops) would have questioned the appropriateness of such a gift from such a source.

In fact any decent honest person would question the source of such a monetary gift , but, obviously not Roman Catholic priests, not Roman Catholic Cardinals. Nor Roman Catholic Archbishops, what does that say/imply about greed and dishonesty in the Roman Catholic hierarchy?
What does it say of Farrell? Roman Catholic CARDINAL KEVIN FARRELL, the Vatican Prefect of the Dicastery for Laity, Family, and Life, NOW THAT THIS EXCHANGE OF MONEY HAS BEEN EXPOSED to one and all will FARRELL return $29,000 given to him by Roman Catholic Bishop Bransfield for RENOVATIONS TO HIS VATICAN APARTMENT reported the Washington Post You could'nt make it up!

Are all hierarchs skilled in ethical discernment only after the fact, and only when subject to criticism?

"Archbishop William E. Lori of Baltimore, who was tasked with overseeing the investigation in West Virginia, said mistakes were made..." That is an understatement. The only mistake is trusting these moral leaders. Sounds like Lori, and his brother cardinals, has ethic$ i$$ue$.

It is so very obvious money is their God.

Here, we have a prime example of the nonsense of, one Roman Catholic Bishop investigating another, the new law initiatated by Pope Francis's recent motu proprio now Catholic canon law, did he really think we would be unable to see thorough ridiculous proposal,which is now enshrined in canon law, it is obviously not worth the paper its written on,surely by now, it has been proven over, and over, and over again, that the Roman Catholic church clergy are incapable of policing themselves. How Lori can even have the brazeness to go on video and state he made a "mistake" by redacting HIS OWN NAME and the names of Wuerl, Tobin, Vigano, Farrell, and many more senior Roman Catholic Bishops and Cardinals too numerous to mention who are all the beneficieries of very large sums of money from the wine swigging, homopredator, caught with hand in the biscuit barrell, Bishop Michael Bransfield, Lori ought to be ashamed of himself as should the other cocky greedy Bishops and Cardinals, religious is not there priority, its so obviously money.
Any person stupid enough to continue to support the Roman Catholic church by giving money, deserves what the get.

Great irony here. The Closet is a terrible place from which to govern a religion.