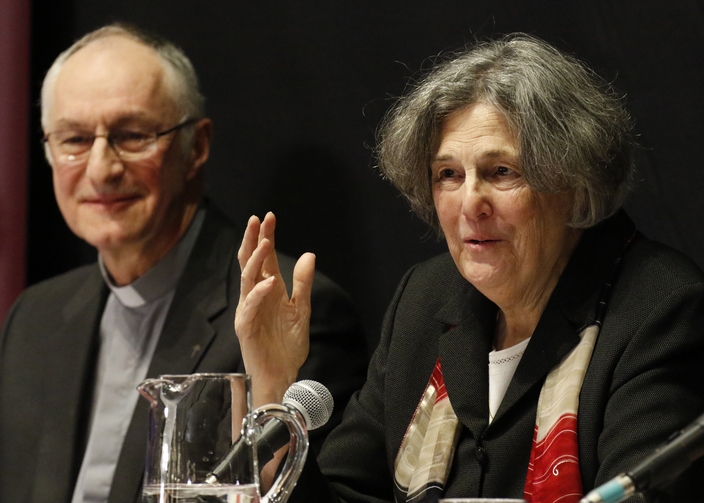 Catholic scholar and author Phyllis Zagano speaks during a symposium on the history and future of women deacons Jan. 15 at Fordham University's Lincoln Center campus in New York City. Looking on is Jesuit Father Bernard Pottier, a member of the Vatican's International Theological Commission. The event was hosted by the Fordham Center on Religion and Culture. (CNS photo/Gregory A. Shemitz)

This week on “Inside the Vatican,” Gerry and I talk about three stories from Pope Francis’ trip to Bulgaria and North Macedonia. We’ll talk about what he did on that trip, as well as two stories he commented on during a press conference aboard the papal plane.

The first of those is the death of “living saint” Jean Vanier, who founded L’arche, the communities where people with and without disabilities live together. I ask Gerry about the pope’s relationship to Mr. Vanier and more.

Next, we talk about why Pope Francis visited North Macedonia and Bulgaria, where there are tiny Roman Catholic minorities. Gerry explains the tensions between the Bulgarian Orthodox Church and the Catholic Church, and how far the ecumenical relations have come in the last few decades.

And finally, we speak about the breaking news on the question of women deacons. Why hasn’t the Study Commission on the Women's Diaconate reached any conclusions? What, if anything, do they agree on?

This episode was brought to you by the documentary “Hesburgh,” available nationwide April 26. Learn more at hesburghfilm.com.

Only a Jesuit pope would countenance the splitting of hairs between the so-called "sacramental ordination" of male deacons and the "non-sacramental blessing" of women. Call it want you want, but go ahead and give it to the women who present themselves for it.
There is one thing that everyone -even the log-jamming Fr. HAUKE in Lugano- should be able to agree upon:
https://nakedpastor.com/the-role-of-women-in-the-resurrection/
Face it, dudes in dresses, the LADIES were representing at the tomb while your apostolic predecessors were cowering in the upper room, awaiting some pneumatological cojones, and subsequently painting a great big scarlet letter on Mary Magdalen!

And this passes as your “progressive” theology, Mister Mckee? “Dudes in dresses,” “pneumatological cojones,” “scarlet letter on Mary Magdalen,” to use your own theological nomenclature?

By the way, Mckee, does female deaconate pass muster with Vincent of Lerins’s famous 4th-century touchstone of orthodoxy? — Quod SEMPER, Quod UBIQUE, Quod AB OMNIBUS- what (is) always, what (is) everywhere, what (is) by everybody (believed).

The men will authorize a female diaconate as Women’s Auxiliary, non-sacramental, to do the dirty work not fitting for the Chauvinists.

This Pope made fools out of our nuns and fully intended to do this from the beginning of the discussion which I and many saw coming from the start. This is why if you are going to bother to bring up equity - do it for real and for a ministry worth the effort.

Pope Francis supported an abusive, misogynistic investigation of our U.S. nuns that he did not officially end until April, 2015. However, before it ended, the issue had come to the point that the laity were supporting the nuns so he had to be careful how he treated them as there was real concern the majority of nuns in the U.S. might break from the church in anger which would inflame the laity. So Pope Francis called some of their leadership to Rome, at the end of the investigation, in 2016, and had the all too secret meeting, so no laity could be told what was discussed, and during this, he told them to shut up about what happened which they did.

So now the question that remained, for the laity, is why are the nuns willing to shut up at this critical point and why won't they tell us laity what happened since we helped them? We find out the answer to this question, about 10 months to a year later, when "supposedly" to the Pope's total surprise, one of the nuns at the Superior General's meeting, in Rome, asks the pope why can't women be deacons?

Now what the laity does not realize is that nothing happens at these meetings, ever, that is not more choreographed, ahead of time, than a Broadway Musical. Which means this question was rehearsed to be asked, to the Pope, by this nun, before the mtg. began, and he knew how he was going to answer it (this show is for the laity only).

This was likely the reward the nuns agreed to 'shut up' for a year earlier. This privilege of getting credit for asking the question to Pope Francis, is what Pope Francis offered the nuns, and it may have gone something like this: If you nuns shut up about the abusive investigation, I will give you the opportunity to save face with the laity, later on, next year, by making it look like you are standing up for women by allowing you to ask for women deacons at the Superior General's Mtg. I will respond to that request that I am willing to have a study on the subject and the laity will think you are courageous for asking me.

Now the nuns probably thought he was offering this because he was seriously considering allowing ordained women deacons anyway but if that were true, he would have set up a research committee right away but he didn't. Instead, Pope Francis waited two years to set one up. Also, if he meant to give women ordained deacon ordination, he would have filled the research committee with people who he believed could come to agreement on a 'Yes' answer.

This however was not Pope Francis' plan, and likely never was from the meeting with the the nun leadership in 2016. Instead, Pope Francis set up the nuns, he got them to shut up, at a point in time, when their silence was pivotal and made them wait for the laity to lose focus, or he hoped they would. Then after prompting continued from the laity and seeing the laity still persevered, he put together a knowingly polarized team to research the issue of female deacons so they would give contradicting results.

Pope Francis knew he could somewhat justify the conflicting results as reason to refuse women the deaconate because it is impossible to absolutely prove most of any history from two thousand years ago, especially given our own church leadership throughout the ages destroyed much of its own documents trying to hide practices like ordination of women priests, etc . After receiving the contradictory results from his hand picked team, he states - Hey, it is not my fault women can't be deacons, it's the researchers who could not agree.

What he has not told us laity, or the nuns is that he never needed the committee to agree women were ordained in the past to be deacons or priests or bishops or popes, in the first place, and our own history does not preclude women absolutely never being all of these ordained categories in our past. If our church had to prove women were never ordained deacons, priests, bishops or made cardinals or popes, they couldn't. Even the Pope Joan story has some serious evidence it may indeed be true and that evidence exists even today. There have been murals and other writings that hint at women as both ordained priests and even bishops and then hidden by our church later on. There is quite good evidence of women as ordained deacons and doing the same ministries as men as deacons.

What Pope Francis has achieved is that he made fools out of both the laity and the nuns. This result of denying female deacon ordination should be considered as perhaps even an intentional revenge play on the U.S. nuns for their progressive ideas and actions which he never liked in the first place and never totally cleared them of in the investigation, and one of which he knew included desiring women priests.

If God never said women can't be ordained the same as men and Jesus never taught this either, which is the case, then the default should be what did Jesus teach or command or REVEAL on how we should treat women and all others. That default is in every Gospel, in one form or another, where Christ commands all of his disciples and apostles to treat all others the same as they wish to be treated - no exceptions are given to this command. Those who fail to follow it or stand up for their brothers or sisters who are being kept from same treatment, are guilty of the grave sin of not loving their siblings in Christ. This sin is what Jesus considered the worst sin a person could commit except not loving God first. In fact, in the Gospel of John, not loving your siblings in Christ the same as self is equated to not loving God because how can one love God but mistreat those God cares about?

So now this Pope goes around pretending to be a good guy who did his best for women when in fact he has made fools of our U.S. nuns and all the laity who supported them and their cause. Meanwhile, we lose more women continuously than protestant churches, and the misogyny and no doubt partnering pedophilia, teen sex abuse and sexual abuse of nuns will just continue forward once the magnify glass dips, and everyone thinks the problems have gone away. Sexism is sexual abuse and it damages people just like racism does. Shame on us for being fooled and how sad these nuns appear thanking the man who made a fool out of them just for being allowed to sit next to him.

Advertisement
More: Inside the Vatican / Vatican / Pope Francis / Women in the Church 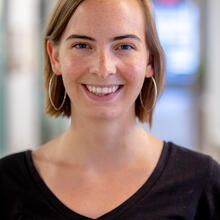