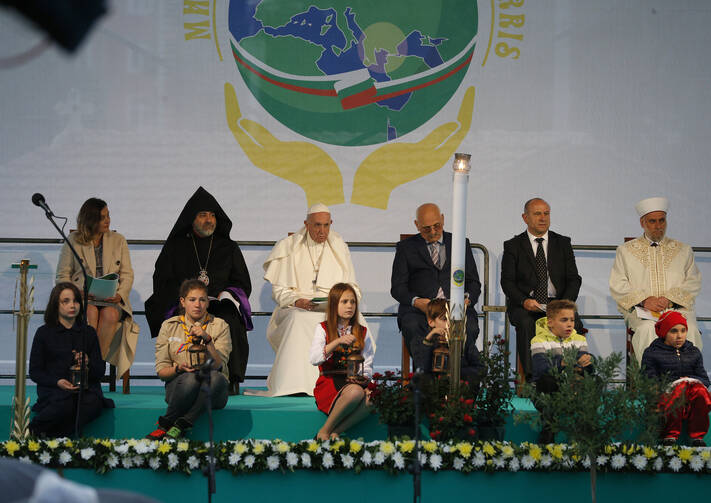 Pope Francis sits near young people as he attends a meeting for peace with Bulgarian representatives of various religious in Nezavisimost Square in Sofia, Bulgaria, on May 6, 2019. (CNS photo/Paul Haring)

On his last day in Bulgaria, Pope Francis made a heartfelt appeal to the country’s political, religious and cultural leaders to work with determination for peace at home and abroad. “With the fire of love, we can melt the icy chill of war and conflict,” he told them.

He called on them to “be peacemakers” at the end of a prayer for peace, attended by representatives of religious communities in this land, including Catholic, Armenian Orthodox and Protestant traditions, and from the Islamic and Jewish communities (represented by a woman). Muslims count for 10 percent of the population and were represented by the chief mufti.

The event was a tribute to St. John XXIII, who was apostolic delegate to the country from 1925 to 1935 and, as pope, wrote the encyclical, “Pacem in Terris” (“Peace on Earth”). Pope Francis spoke from a platform placed in Nezavisimost (Independence) Square, which is located in the center of Sofia in an area that was heavily bombed during World War II but transformed after reconstruction between 1952 and 1958 into a showplace for Socialist Classicism.

A statue of Lenin once stood in the square and the Bulgarian Communist Party had its headquarters here. For many decades—until the fall of communism in 1989—this place had been known as Lenin Square. The choice of venue for this evening’s event was therefore no accident. It was transmitted live on national television to this nation of seven million people.

Like Saint Francis, the pope said, “each of us is called to follow in his footsteps by becoming a peacemaker, an ‘artisan’ of peace.”

As rain poured down, the one-hour ceremony began with choirs from the nation’s different religious communities singing the hymn of St. Francis of Assisi, “Lord, make me an instrument of your peace,” in Italian and Bulgarian, followed by the reading of Psalm 122. Children representing Bulgaria’s different religious communities, bore lanterns, which Pope Francis said "symbolize the fire of love that burns within us and that is meant to become a beacon of mercy, love and peace wherever we find ourselves. A beacon that can cast light upon our entire world."

Pope Francis then spoke, underlining the deeper significance of the evening’s event in a brief but challenging address to those whom he called “dear brothers and sisters.” He began by telling them, “We have prayed for peace in words inspired by Saint Francis of Assisi, who was so greatly in love with God the Creator and Father of all. A love that he showed with similar passion and deep respect for the beauty of creation and for all those whom he encountered on his pilgrim way.”

He said that love changed St. Francis’ way of seeing things and “helped him to realize that in everyone there is a flicker of light born of our personal certainty that when everything is said and done we are infinitely loved.” He said, “That love also led Saint Francis to become a true peacemaker.”

Like Saint Francis, he said, “each of us is called to follow in his footsteps by becoming a peacemaker, an ‘artisan’ of peace.”

He reminded them that peace is “both a gift and a task: it must be implored and worked for, received as a blessing and constantly sought as we strive daily to build a culture in which peace is respected as a fundamental right.” He emphasized that this must be “an active peace,” that is, a peace which is “fortified against all those forms of selfishness and indifference that make us put the petty interests of a few before the inviolable dignity of each person.”

Then, quoting from the Document on Human Fraternity that he had signed with the Sheik of Al-Azar in Abu Dhabi on Feb. 4, Pope Francis said, “Peace requires and demands that we adopt dialogue as our path, mutual understanding as our code of conduct and reciprocal understanding as our method and standard.” In this way, he said, “we can focus on what unites us, show mutual respect for our differences and encourage one another to look to a future of opportunity and dignity, especially for future generations.”

He recalled that they had gathered “to pray before these lamps brought by our children” which, he said, “symbolize the fire of love that burns within us and that is meant to become a beacon of mercy, love and peace wherever we find ourselves. A beacon that can cast light upon our entire world.”

Peace is “both a gift and a task: it must be implored and worked for, received as a blessing and constantly sought as we strive daily to build a culture in which peace is respected as a fundamental right.”

Pope Francis noted that this service for peace was taking place on the ruins of ancient Serdica, a Roman city that was occupied by different groups over the centuries, and today one can see places of worship of the nation’s different religious traditions: Orthodox, Catholic, Jewish, Muslim and Armenian.

He recalled too that “for many centuries” the Bulgarians of Sofia “belonging to different cultural and religious groups gathered in this place for meetings and discussions.” He prayed that this symbolic place “may become a witness to peace.”

He concluded by inviting others to join him “in expressing our ardent desire for peace,” but the pope avoided using the word “pray” out of respect for Orthodox Christians who oppose common prayer. He said: “Let there be peace on earth: in our families, in our hearts and above all in those places where so many voices have been silenced by war, stifled by indifference and ignored due to the powerful complicity of interest groups.”

He called on the religious, political and cultural leaders of this “land of the roses” to “work together to make this dream come true.” He added that it was also the dream of Pope John XXIII that there be “pacem in terris,” peace on earth.

The service for peace concluded with each one exchanging the kiss of peace. Then all sang the “Alleluia!”

It was Pope Francis’ last message to the Bulgarians. Tomorrow morning he takes the plane to North Macedonia, the first pope to visit that land, and from there returns to Rome tomorrow evening, May 7.