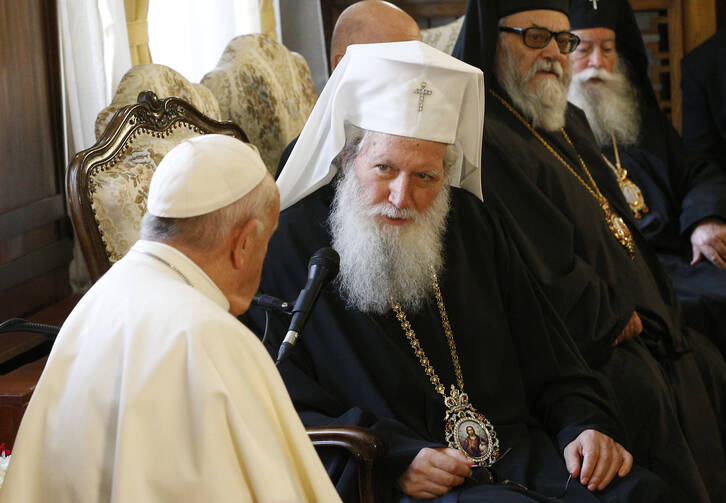 Francis walked forward with a smile and outstretched hands, kissed the patriarch on both cheeks, and then kissed the icon of Christ that the Orthodox leader was wearing. They exchanged greetings with the aid of a translator, and then sat down and continued conversing for several minutes. Both the pope and the patriarch seemed at ease in what was only the second meeting in more than a thousand years between a pope and a Bulgarian Orthodox patriarch.

The first was 17 years ago in May of 2002, when Pope John Paul II visited after the fall of communism and met Patriarch Maxim.

Patriarch Neofit: "We have always prayed for the unity of the world in Christ, because united Christians will be stronger.”

Patriarch Neofit welcomed Francis “in the name of the Holy Synod, to a land that bears the patrimony of Saints Cyril, Methodius, Prince Boris Michael” and others, “thanks to whose educating work in the ninth and tenth centuries, Christianity spread in Europe and beyond.”

He told Francis that “we try, insofar as possible, to follow your work and we rejoice when we hear strong words in defense of the Christian roots of Europe and warning against about the dangers that are escalating to the point of an open fight against God and physical persecution of Christians in their own lands.” He added: “On these points our opinions coincide.” He recalled that when John Paul II came to Bulgaria, he had lamented “the lack of full communion among us,” but “we have always prayed for the unity of the world in Christ, because united Christians will be stronger.”

Pope Francis spoke next from a prepared text with accompanying translation. He recalled that today is the day Christians in the East call “St. Thomas Sunday,” and suggested that together they could contemplate the apostle who touched the wounds of Jesus, especially “the wounds opened in the course of history between us Christians” and that “remain painful bruises inflicted on the body of Christ which is the church.”

Pope Francis noted the many Bulgarian Christians who “endured sufferings for the name of Jesus, in particular during the persecution of the last century."

‘The ecumenism of blood’

Francis noted the many Bulgarian Christians who “endured sufferings for the name of Jesus, in particular during the persecution of the last century” in what he called “the ecumenism of blood.” He said he believed that these “witnesses of Easter, brothers and sisters of different confessions united in heaven by divine charity, now look at us as seeds planted in the earth and meant to bear fruit.”

Pope Francis recalled the visit of Pope John Paul II with Patriarch Maxim in 2002, as well as the decade that Angelo Roncalli, the future Pope John XXIII, had spent in Bulgaria. Francis said he felt in his heart “the fraternal nostalgia, that healthy longing for unity among the children of the same Father, that was felt with growing intensity by John XXIII during his time in this city.” He recalled the significant fact that the Bulgarian Orthodox Church “sent its own observers” to the Second Vatican Council, “and from that time on, our contacts have multiplied.” Among the latter, he mentioned the visits of Bulgarian delegations to the Vatican over the past 50 years “and which I have had the joy to welcome,” and he drew attention to the fact that a Bulgarian Orthodox community in Rome “prays in the church of my diocese.”

‘The ecumenism of the poor’

He expressed his confidence “that, with the help of God, and in his good time, these contacts will have a positive effect on many other dimensions of our dialogue.” In the meantime, he told the Holy Synod, “we are called to journey and act together in order to bear witness to the Lord, particularly by serving the poorest and most neglected of our brothers and sisters, in whom he is present.” He described this as “the ecumenism of the poor.”

‘The ecumenism of mission’

Francis recalled that Cyril and Methodius “had the audacity to translate the Bible into a language accessible to the Slavic peoples, so that the divine word would precede human words.” On this journey, he said, Saints Cyril and Methodius would be “our guides” since they “have linked us since the first millennium” and their “living memory in our churches continues to be a source of inspiration, for despite adversities they made their highest priority the proclamation of the Lord, the call to mission.” He recalled that “despite premonitions of the painful divisions which would take place in centuries to come, they chose the prospect of communion.” Francis noted that “mission and communion” are “two words that distinguished the life of these two saints” and said they are also words “that can illumine our own journey towards growth in fraternity.” He called this “the ecumenism of mission.”

Pope Francis suggested that the evangelization of the young is a common task which both Catholics and Orthodox can engage in, “within the respective traditions,” so as “to help the young experience the joy of a God who loves and calls us.” Otherwise, he said, they will be tempted to give trust to the many “deceitful siren songs of a consumer society.”

Pope Francis called for Catholic and Orthodox evangelization of the young, lest they be tempted by the “deceitful siren songs of a consumer society.”

He recalled that in Bulgaria, a great variety of religious faiths have found welcome, from the Armenian to the Evangelical, from Jewish to Muslim. He noted that the Catholic church too found welcome and respect here, both in its Latin and Byzantine tradition. Saints Cyril and Methodius, he remarked, remind us that “a certain diversity of uses and customs are not in any way opposed to the unity of the church, and that the various theological formulations often complete rather than oppose each other.”

He concluded his speech by assuring the Patriarch and synod of his prayers for them and the faithful of this beloved people, for the vocation of this country, and for “our common journey in an ecumenism of blood, of the poor and of mission.”

Accompanied by the Orthodox Metropolitan of Western and Central Europe, Pope Francis then went to the nearby 19th-century Patriarchal Cathedral of Saint Alexander Nevsky, to pray at the memorial (“the throne”) of Saints Cyril and Methodius.