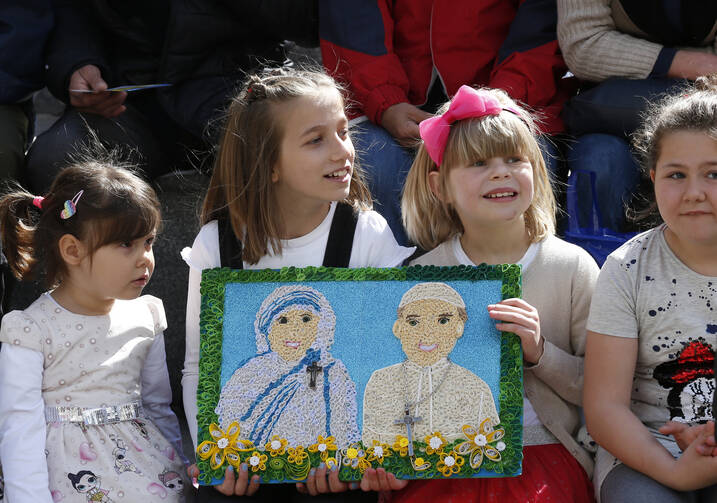 Children hold a gift showing St. Teresa of Kolkata and Pope Francis before the pope's visit to the Mother Teresa Memorial in Skopje, North Macedonia, May 7, 2019. (CNS photo/Paul Haring)

Pope Francis wrote a new chapter in the history of the church today by being the first pope ever to visit North Macedonia and the first to celebrate Mass in this country, almost certainly the largest ever held in this land.

According to official sources, 15,000 people attended the pope’s Mass in Macedonia Square in the center of Skopje, the capital city. The size of the crowd was surprising given that Catholics are a tiny minority in this land of two million people, a mere 20,000 faithful divided into two rites—Byzantine and Latin, served by one bishop, 20 priests and 30 religious women and men.

Francis came here for this historic celebration after visiting the memorial to Mother Teresa of Calcutta. Mother Teresa was born Anjezë Ganxhe Bojaxhiu to Albanian parents in Skopje on Aug. 26, 1910, so after paying the obligatory formal visit to North Macedonia's president, Pope Francis went to the memorial and museum built on the site of the church where she was baptized. The church was destroyed in an earthquake in 1963.

"Moved by the love of God," the pope told the president, Mother Teresa "made love of neighbor the supreme law of her life."

He visited the memorial, saw relics of “the saint of the slums” and recited a prayer that he had personally composed. He praised God for the gift of her life and prayed for her intercession for North Macedonia.

He visited Mother Teresa’s memorial, saw relics of “the saint of the slums” and recited a prayer that he had personally composed. He praised God for the gift of her life and prayed for her intercession for North Macedonia.

Pope Francis also prayed that God would give Christians the grace "to become signs of love and hope in our own day when so many are poor, abandoned, marginalized and migrants."

Among the guests present at the memorial were dozens of Missionaries of Charity, about 100 of the people they serve in Skopje and two of Mother Teresa's cousins, the Vatican said.

Besides the Catholic bishop of Skopje, Kiro Stojanov, representatives of the nation’s different religious communities were also present, including Primate Stefan Veljanovski, the head of the Macedonian Orthodox Church to which 65 percent of the population belong, even though it is considered schismatic by the other Orthodox churches; the Grandi Mufti, Suleman Efendi Rexhepi—33 percent of the population are Muslim; Rev. Michail Cekov of the Evangelical Methodist church; and Berta Romano Nikolic of Skopje’s Jewish community.

After the visit to the Mother Teresa memorial, the pope went to the nearby square, at the center of which stands a massive statue to Alexander the Great. He concelebrated the Mass in Latin and delivered a homily in Italian, which was translated immediately into the language of the people. The large crowd participated with great reverence at the Mass, listened in silence to his homily and applauded energetically when he finished speaking. A choir of women and men led the singing.

In his homily, Francis commented on the Gospel of John (6:35) that had just been read and told those present and the crowd following live on national television, “The Lord came to give life to the world. He always does so in a way that defies the narrowness of our calculations, the mediocrity of our expectations and the superficiality of our rationalizations.” He said Jesus invites us “to move to a new horizon enabling us to view reality in a different way. He is the living Bread come down from heaven, who tells us: ‘Whoever comes to me shall not hunger, and whoever believes in me shall never thirst.’”

Pope Francis told his North Macedonian audience that all those people who followed Jesus “discovered that hunger for bread has other names too: hunger for God, hunger for fraternity, hunger for encounter and a shared feast.” Mother Teresa “knew all this well,” he declared. “She desired to build her life on the twin pillars of Jesus incarnate in the Eucharist and Jesus incarnate in the poor! Love received and love given. Two inseparable pillars that marked her journey and kept her moving, eager also to quench her own hunger and thirst.”

He recalled that “Mother Teresa went to the Lord exactly as she went to the despised, the unloved, the lonely and the forgotten. In drawing near to her brothers and sisters, she found the face of the Lord, for she knew that “love of God and love of neighbor become one: in the least of the brethren we find Jesus himself, and in Jesus we find God” (“Deus Caritas Est,” No. 15). And that love alone was capable of satisfying her hunger.”

Pope Francis: “Think of Mother Teresa: when she lived here, she could not have imagined where her life would have ended up. Yet she kept dreaming and tried to see the face of Jesus, her great love, in all those people on the sides of the road. She dreamed in a big way.”

That afternoon, Francis met with 1,500 young people at a lively open-air ecumenical and interreligious encounter, at a pastoral center in Skopje. After listening to testimonies and questions from some of them, including one from a young Muslim, he responded with depth and humor.

He told them, that “one of the big problems people have today, including so many young people, is that they have lost their ability to dream. They don’t dream, either much or little. When someone does not dream, when a young person does not dream, that empty space gets filled with complaints and a sense of hopelessness.”

He recalled that “a few months ago, a friend of mine, Ahmad Al-Tayyeb, the Grand Imam of Al-Azhar, and I had a dream… that made us want to make a commitment and sign a document that says that faith must lead us believers to see other persons as our brothers and sisters. As brothers and sisters that we need to support and love, without letting ourselves be manipulated by petty interests. We can have dreams at every age… So, keep dreaming, and dream big!”

He urged them to “think of Mother Teresa: when she lived here, she could not have imagined where her life would have ended up. Yet she kept dreaming and tried to see the face of Jesus, her great love, in all those people on the sides of the road. She dreamed in a big way, and this is why she also loved in a big way. She had her feet firmly planted here, in her native land, but she didn’t stand still. She wanted to be “a pencil in the hands of God.” This was the dream she crafted. She offered it to God, she believed in it, she suffered for it, and she never gave it up. And God began to write new and amazing pages of history with that pencil.”

“Each of you is called, like Mother Teresa,” Pope Francis said, “to work with your hands, to take life seriously and make something beautiful of it. Let us not allow ourselves to be robbed of our dreams; let us not deprive ourselves of the newness that the Lord wants to give us.”

After his meeting with the young people, Francis went on to meet with priests, their families and religious in the cathedral of the Sacred Heart of Jesus in Skopje. Some of the priests belong to the Byzantine rite and are married and came with their families.

Once the meeting with the priests and religious ended, Francis drove directly to the airport and took the plane to Rome. He was scheduled to give a brief press conference on the two-hour flight to Rome.

Saint Mother Teresa - Pray for us.