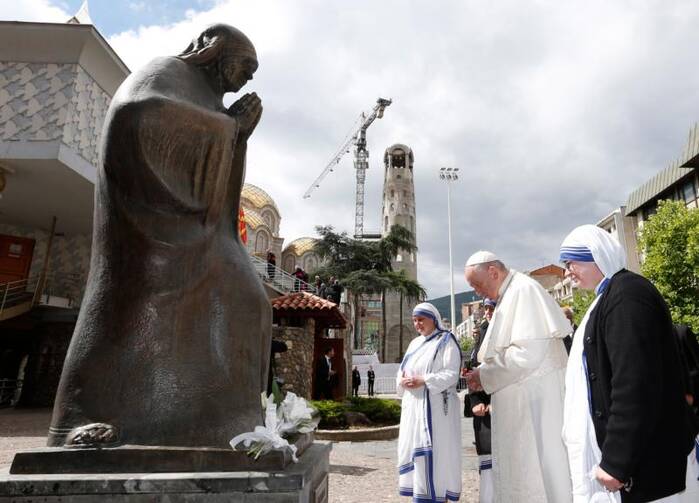 Pope Francis prays in front of a statue of Mother Teresa at the Mother Teresa Memorial during a meeting with religious leaders and the poor in Skopje, North Macedonia, May 7, 2019. (CNS photo/Paul Haring)

From Skopje, the capital city of North Macedonia where Mother Teresa of Calcutta was born and home to 500,000 people, Pope Francis called on the country’s leaders to continue on the path they have taken so that their homeland may be “a beacon of peace, acceptance and fruitful integration between cultures, religions and peoples.”

Francis is the first pope to visit this small country of 2 million people, which is one of the poorest in Europe. Unemployment in the country is more than 20 percent (50 percent among the young), and the average monthly salary is the equivalent of U.S. $450. He came here at the invitation of the government, which had tried without success to get John Paul II and Benedict XVI to come.

While North Macedonia is a country on the periphery of Europe, Francis, who is attentive to the peripheries, also recognizes it as multi-ethnic and multi-religious and “a witness” to the world that peoples of different religions and cultures can live together in peace. On the eve of his visit, he told them, “Today, more than ever, there is a need to promote in Europe and throughout the world the culture of encounter and of solidarity, and I will come among you to sow these seeds, sure in the knowledge that yours is good soil, and that it will be able to welcome them and bear fruit.”

Francis is the first pope to visit this small country of 2 million people.

The president and the prime minister, truly grateful for his visit, went to Skopje International Airport to welcome him. In his welcome address, President Gjorge Ivanov greeted the pope and noted that his visit came on the 25th anniversary of the establishment of diplomatic relations between his country and the Holy See. He thanked the Holy See for its “continuous support” to their quest to join the European Union.

He told the pope, “you come in a time when the Macedonian society is deeply divided, and the Macedonian country is heavily wounded by broken promises, unfulfilled expectations and faltering trust in international community.” He mentioned “the blockades” on their path to join the European Union, alluding to Greek objections, and said “the cross and crescent, the church and the mosque are being misused as borders and fortresses to mark and defend some kind of imaginary territories. It seems we forget that we are all people, regardless of our belief.”

Turning to Francis, he said, “only spiritually transformed people can transform the spirit of society” and for this to happen it “requires a person with significant moral authority who will speak to the soul of the nation.” He said he was convinced that “the Macedonian citizens, Christians, Muslims, Jews or atheists, recognize Your Holiness as such a person.”

Francis hailed North Macedonia as “a bridge between East and West and a meeting-point for numerous cultural currents."

Pope Francis thanked the president and religious leaders, which represented the Orthodox (65 percent of the population) and Muslim (33 percent). He thanked especially the bishop of Skopje, who represents the tiny Catholic community of 20,000 people divided into Byzantine and Latin rites, with their 20 priests and 30 religious. He said he was happy to be the first pope to come here and to do so on the 25th anniversary of its diplomatic relations with the Holy See.

Francis hailed North Macedonia as “a bridge between East and West and a meeting-point for numerous cultural currents” and noted that it has “elegant testimonies of its Byzantine and Ottoman past.” He praised its “multiethnic and multi-religious countenance” and “culture” that developed over the centuries under different empires: Macedonian, Roman and Byzantine, and Ottoman. He alluded to the difficulties the country experienced until it gained independence in 1991.

Reflecting on this, Francis said “this crucible of cultures and ethnic and religious identities has resulted in a peaceful and enduring coexistence in which those individual identities have found expression and developed without rejecting, dominating or discriminating against others.” He said it has given rise to “a fabric of relationships and interactions that can serve as an example and a point of reference for a serene and fraternal communal life marked by diversity and reciprocal respect” and for its “increased integration” in Europe.

Francis highlighted the fact that in North Macedonia “the different religious identities of Orthodox, Catholics, other Christians, Muslims and Jews, and the ethnic differences between Macedonians, Albanians, Serbs, Croats” have helped create “a mosaic in which every piece is essential for the uniqueness and beauty of the whole.” He told the country’s leaders that “every effort made to enable the diverse religious expressions and the different ethnic groups to find a common ground of understanding and respect for the dignity of every human person, and consequently the guarantee of fundamental freedoms, will surely prove fruitful.” He emphasized that such “efforts will serve as the necessary seedbed for a future of peace and prosperity.”

Pope Francis went on to praise the “generous efforts” of the state authorities, assisted by the international agencies and NGOs, including the Red Cross and Caritas, in welcoming and providing assistance to the great number of migrants and refugees from different Middle Eastern countries, fleeing situations of violence and poverty, especially in 2015 and 2016. He said that this “ready solidarity offered to those in such great need…does you honor” and “says something about the soul of this people that, having itself experienced great privations, recognize in solidarity and in the sharing of goods the route to all authentic development.” He expressed the hope that such solidarity will continue.

Francis then went on to speak about Mother Teresa, whose memorial he would visit later. He has always admired her and, back in Buenos Aires, had a photo of her, standing beside John Paul II, on the entrance to his study. He recalled that she was born in a suburb of Skopje in 1910, and “moved by the love of God, she made love of neighbor the supreme law of her life.” In doing so “she won the admiration of the whole world and pioneered a specific and radical way of devoting one’s life to the service of the abandoned, the discarded, and the poorest of the poor.” He encouraged the sons and daughters of this land to follow the example of “this great woman.”

He recalled that since North Macedonia gained independence in 1991, “the Holy See has closely followed the steps that this country has taken to advance dialogue and understanding between the civil authorities and religious confessions.” He said he had come to express his personal closeness to this people, and also to thank the government for sending an official delegation to the Vatican on the feast of Saints Cyril and Methodius.

He encouraged them “to persevere” and concluded with these words: “May God protect and bless North Macedonia, preserve it in concord, and grant it prosperity and joy!”