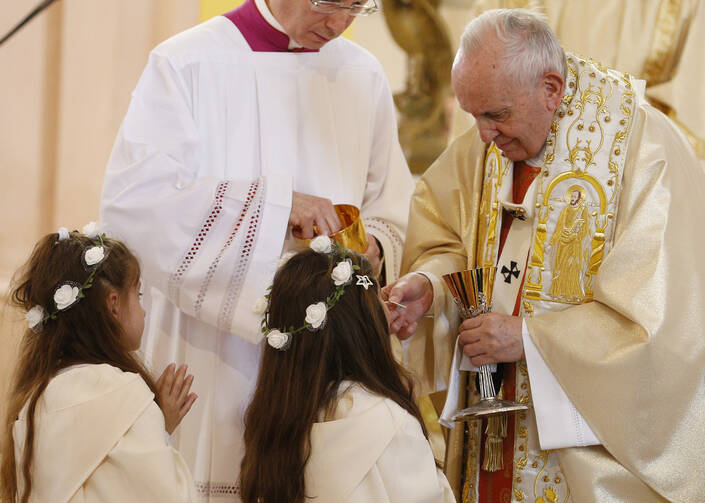 Pope Francis gives first Communion to children during a Mass at the Church of the Sacred Heart in Rakovski, Bulgaria, May 6, 2019. (CNS photo/Paul Haring)

Pope Francis received an enthusiastic welcome this morning from tens of thousands of Bulgarians when he visited the small town of Rakovski in southwest Bulgaria to celebrate Mass and give first holy Communion to 245 children.

Even as pope, Francis considers himself a parish priest—“the world’s parish priest” as he once told a friend. This morning, he presided in a small Catholic enclave more than 100 miles from Sofia, the capital city. The young people, all dressed in white and accompanied by their parents and friends, had come from far and wide for this momentous occasion.

He is the first pope to come to Rakovski, and the people’s joy was apparent. They waved flags and banners, chanted, applauded and cheered as he passed by in the popemobile. Francis got down from the vehicle to walk among them, shake hands and bless young and old. Bulgaria is known as “the land of roses,” and Francis smiled when one young boy gave him a red rose.

Even as pope, Francis considers himself a parish priest—“the world’s parish priest” as he once told a friend.

He celebrated Mass in the Church of the Sacred Heart, which was built after the 1928 earthquake thanks to the efforts of Archbishop Angelo Roncalli, who later became Pope John XXIII and whom Francis canonized along with John Paul II—the first pope to come to this country. The church was packed to capacity, and tens of thousands gathered outside to follow the Mass on Jumbotrons.

When it came to the homily, Francis spoke in a way the children could understand and kept it short. He told them he was happy to be with them and their parents, relatives and friends on this day and offered them the traditional Easter greeting in Bulgaria: “Christos vozkrese!” (“Christ is risen!”)

“Dear boys and girls,” he said, “you have come here from every corner of this ‘land of roses’ to take part in a wonderful celebration. I am sure you will never forget this day: your first encounter with Jesus in the sacrament of the Eucharist.”

“First Communion,” Francis said, “is, above all, a celebration. We celebrate Jesus, who wants to remain always by our side.”

He told them: “We rejoice because, for love of us, Jesus gave his life on the cross and destroyed sin. He rose again and made us adopted sons and daughters of God the Father. We are joyful because he is alive and present among us, today and always.”

Then, speaking to them as he used to address children back in Buenos Aires, Francis said: “One of you might ask me: How can we meet Jesus? He lived a long time ago, but then he died and was laid in the tomb! It is true: Jesus carried out an immense act of love to save human beings of all times. He remained in the tomb for three days, but we know—the Apostles and many other witnesses who saw him alive have assured us—that God, his Father and ours, raised him up. Now Jesus is alive and is here with us. That is why we can encounter him today in the Eucharist. We do not see him with our physical eyes, but we do see him with the eyes of faith.”

He told them they looked “beautiful” dressed in their white robes for a celebration. “First Communion, Francis said, “is, above all, a celebration. We celebrate Jesus, who wants to remain always by our side. He will always be with us.” He reminded them that this celebration was made possible thanks to their parents and grandparents, their families and communities, their catechists and priests who “have also accompanied you on the road that today leads you to meet Jesus and to receive him in your hearts.”

“This is our identity card: God is our Father, Jesus is our brother, the church is our family. All of us are brothers and sisters, and our law is love.”

In his homily, translated instantly on large screens, he told them: “This is our identity card: God is our Father, Jesus is our brother, the church is our family. All of us are brothers and sisters, and our law is love.”

At the end of the homily, which was enriched by beautiful singing and the sounds of drums, guitar and tambourines, he talked with them, with the aid of a translator, and got them to repeat the text of their “identity card.” When they had done so, he asked, “Are we enemies?” They shouted “no!” He asked, “Are we friends?” They shouted “yes!” And he ended by telling them, “Yes, we are friends, we are brothers and sisters, we are called Christians, and our law is love.”

He asked them “to always pray with the same enthusiasm and joy that you feel today” and to “remember that this is the sacrament of your first Communion, not your last! And remember, too, that Jesus is always there, waiting for you.”

He said he hoped “that today will be the beginning of many Communions, so that your hearts may always, like today, be festive, full of joy and, above all else, gratitude.”

Then, before giving them Communion, he spoke again and told them: “Now you will receive Jesus. Don’t think of anything else; just think of Jesus. Receive him in silence. Make silence in your heart. Remember this is the first time you receive him.” He then gave holy Communion to all 245 children, one by one.

It was a day they will always remember, as will the 68,000 Catholics that live in this “land of the roses.” Pope Francis will remember it, too: They released a shower of white rose petals on him as he left the altar.