Cardinal Gracias: sex abuse crisis is a global problem with ‘no easy solution’ 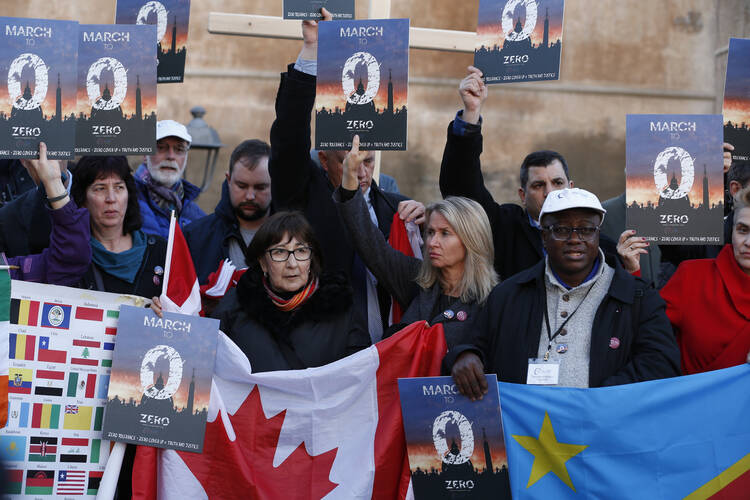 Describing the church’s ongoing challenges in holding priests and bishops accountable for the sexual abuse of minors as “a multifaceted crisis,” Cardinal Oswald Gracias urged bishops gathered in Rome to acknowledge that the challenge “is not a limited phenomenon” and “to act decisively to prevent abuse from occurring in the future.”

Speaking to the group of bishops gathered in Rome for the Vatican summit on sexual abuse, Cardinal Gracias, the archbishop of Bombay who is part of the Council of Cardinals that advises Pope Francis, told bishops that they “must also learn to practice other forms of management” and that they “need to further development of intercultural competences.”

As the abuse crisis unfolded in the early 2000s, first in the United States and then Europe, some bishops have claimed that the sexual exploitation of minors by priests was unique to those places.

At a press conference in Rome held Feb. 21, Australian Archbishop Mark Coleridge said he heard bishops from Africa and Asia ask questions that seemed to downplay abuse in their regions.

He recalled hearing questions along the lines of, “Why this obsession with sexual abuse?”

Archbishop Mark Coleridge said he heard bishops from Africa and Asia ask questions that seemed to downplay abuse in their regions.

Earlier this week, Archbishop Philip Neehman of Ghana told the Catholic news site Crux that the problem is not as big an issue in Africa as it is in the United States and Europe.

“We have other problems to battle with,” the archbishop told Crux, such as physical abuse, but he said that the abuse of children in Africa is “very, very, very minimal.” But he said church leaders there recognize the potential for abuse and are “trying to get ahead of it” by, for example, requiring seminarians to learn about safe-environment protocols.

But Hans Zollner, S.J., a child protection expert who helped plan the summit, said that victims who offered testimony to bishops were chosen “from all continents, in different languages, so it becomes clear that this is not a North American or Central European problem.”

In his talk, Cardinal Gracias, who helped plan the four-day summit, rejected the notion that abuse is limited to certain parts of the world.

“No bishop may say to himself, ‘The problem of abuse in the church does not concern me because things are different in my part of the world,’” he said, adding, “We are each responsible for the whole church.”

Still, he acknowledged that circumstances may affect how local churches respond to abuse. For example, while the cardinal said that “those who are guilty of criminal behavior are justly accountable to civil authority,” he noted that “complications ensue when there are antagonistic relations between the church and the state.”

“No bishop may say to himself, ‘The problem of abuse in the church does not concern me because things are different in my part of the world.’”

But Cardinal Gracias said bishops must work together—and with Rome—to ensure that perpetrators are brought to justice and to “protect young and vulnerable people from future abuse.”

Cardinal Tagle at abuse summit: How do we balance justice and forgiveness?
Michael J. O’Loughlin

A statement released on Feb. 22 by the Archdiocese of Mumbai denies elements of the BBC story, saying that the cardinal acted appropriately and swifty in a particular case involving abuse allegations he was made aware of in 2015.

Victims advocates have said they want the summit to implement policy changes that can take effect immediately, but Cardinal Gracias seemed to dampen those expectations in his speech.

“As the abuse crisis has unfolded, we have to come to know that there is no easy or quick solution,” he said.

All it takes is a simple google search: "child protection training."..then name your country or continent, to see that protection of children against sexual abuse is an international reality. There's even an approach (1. say STOP 2. get away 3. tell a trusted adult) that is in use internationally. The bishops need to speak with their social workers.

If only it were so simple Molly.