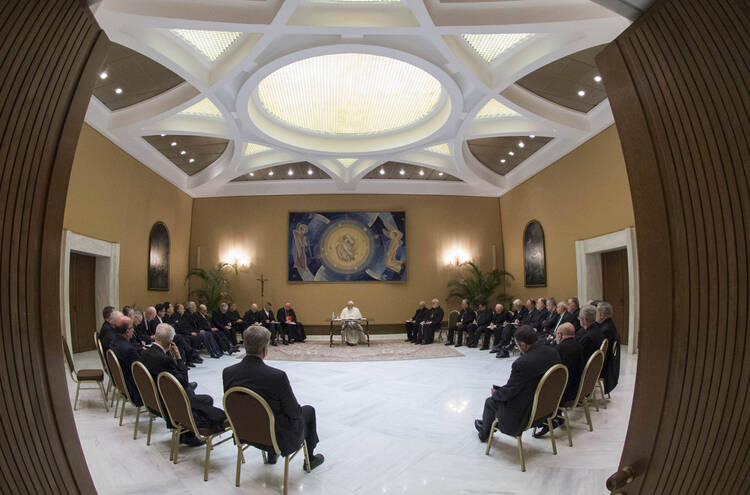 Pope Francis and 34 Chilean bishops met in May to discuss the clerical sexual abuse crisis in Chile. (CNS photo/Vatican Media)

VATICAN CITY (AP) — Pope Francis accepted the resignation on June 11 of the bishop at the center of Chile's clerical sex abuse scandal and two others, launching the purge of a Catholic Church that has lost its credibility under an avalanche of accusations of abuse and cover-up.

A Vatican statement said Francis had accepted the resignations of Bishop Juan Barros of Osorno, Bishop Gonzalo Duarte of Valparaiso and Bishop Cristian Caro of Puerto Montt. Of the three, only the 61-year-old Barros is below the retirement age of 75.

Francis named temporary leaders of each of the dioceses.

Bishop Barros has been at the center of Chile's growing scandal ever since Francis appointed him bishop of Osorno in 2015 over the objections of the local faithful.

Barros has been at the center of Chile's growing scandal ever since Francis appointed him bishop of Osorno in 2015 over the objections of the local faithful, his own sex abuse prevention advisers and some of Chile's other bishops. They questioned Barros' suitability to lead given he had been a top lieutenant of Chile's most notorious predator priest and had been accused by victims of witnessing and ignoring their abuse.

Barros denied the charge, but he joined 30 of Chile's other active bishops in offering their resignations to Francis at an extraordinary Vatican summit last month. Francis had summoned Chile's church leaders to Rome after realizing he had made "grave errors in judgment" about Barros, whom he had defended strongly during his troubled visit to Chile in January.

Francis had realized his errors after reading the 2,300-page report compiled by two leading Vatican investigators about the depth of Chile's scandal, which has devastated the credibility of the church in a once overwhelmingly Roman Catholic country in the pope's native Latin America.

Those two investigators, Archbishop Charles Scicluna and Spanish Monsignor Jordi Bertomeu, are heading back to Chile on Tuesday to begin what the Vatican has said is a "healing" mission to Osorno.

By accepting Barros' resignation on the eve of their arrival, Francis is essentially giving Scicluna and Bertomeu a hand in helping to heal the divisions.

But by also accepting the resignations of the two other bishops, Francis is making clear that the troubles in Chile's church do not rest on Barros' shoulders alone, or on those of the more than 40 other priests and three bishops trained by the Rev. Fernando Karadima, who was sentenced by the Vatican in 2011 for his sex crimes.

Karadima created homosexuals with his abuse, and created Bishops who tolerate abuse by example. It's time we just say no on this topic- ZERO tolerance for pederasty, just like in the old days when pederasts were sentenced to death.

T.S.: Gays are born gay, not created. What was created was an hidden acceptability of sexual child abuse, mostly boys, but girls too. While understanding the anger every decent human being feels about crimes like this, I'm kind of (not really) surprised that you would see them put to death when the church is pro LIFE. I have never been able to square that circular logic....

Mr Seeber,
I was sexually abused by my mother for years beginning at the age of 12. By your logic, I should be heterosexual. I am a gay man. Sexual abuse does not affect sexual orientation, it's a biological process that occurs during fetal development. Do you understand the extreme hurt and possible confusion your attitude/statements have on survivors of child sexual abuse? Or is it your purpose to try to further abuse such survivors: male, female, gay, or straight?

If Barros had been appointed by JP II, would America magazine
be giving the Pope such approbation.

How could Francis appoint Barros if he knew about the allegations ?
If he did not, why did he not.

The Captain of a Ship is duty bound to know about all the
crucial decisions being made on his ship.

Yes, these men should resign and the go lead lives of penance.

Pope Francis needs to do likewise.

I agree with you, they ALL, including the other 27 who gave their resignations, resign. Not only their position in the church, but from the church itself. No relocation, no retreat. OUT. FIRED.

just remember the French proverb--c'est le premier pas qui coute--it's the first step that counts---no other Pope has taken such a step in the long history of child abuse...once Francis gets used to the idea of firing complicit bishops, we might see more heads roll. This is a good first step.

Every time an issue such as this is in the news, the long knives are unsheathed and the carcasses are left to rot. One has this visceral feeling of disgust, but we fail in that we do not own the problem. How much damage, as Catholics do we want to inflict upon ourselves, before we understand that all of this is our church, our responsibility? "if salt has lost its taste, how can its saltiness be restored? It is no longer good for anything," Jesus called all of us - all of us, to be the light of the world.