‘Spotlight’ and the Catholic Church’s long road to reformation 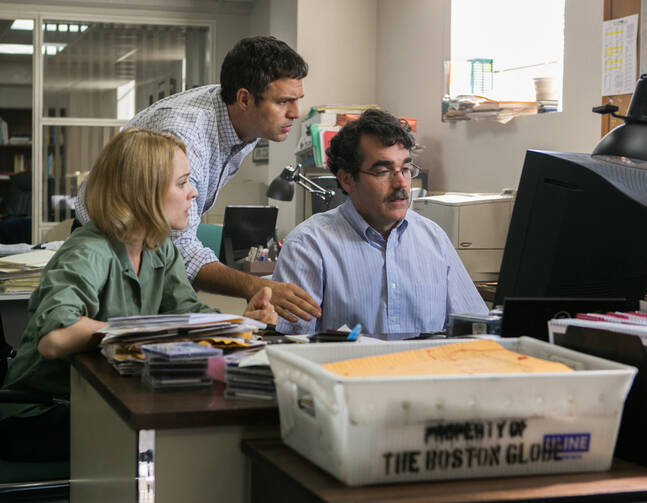 On Saturday I saw “Spotlight," the powerful new Tom McCarthy film about the Boston Globe’s work to break the Boston sexual abuse story in 2002. The movie is in some ways the church scandal version of “All the President’s Men,” a team of investigative reporters led by Michael Keaton little by little discovering that a story about one Boston priest who sexually abused kids is actually the story of nearly a hundred priests in Boston alone, as well as thousands of victims, and an overall international system of suppression and enabling by church officials and their many supporters.

It’s a surprisingly restrained, quietly devastating drama that well captures the unfolding horror of that moment. (Here’s a far more substantive review of the piece by Tim Reidy; and a reflection from young priest Sam Sawyer.)

To my mind “Spotlight” is also a film that pushes the church to consider where it is today, and where it needs to go.

When the Globe stories began I was studying theology in Cambridge, Mass., along with 150 other Jesuits and non-Jesuits. It was a sickening, helpless time, as we watched many of our ideas about the church disintegrate into this horror show of abuse, double speak and cover up. Wearing clerics immediately felt like toting a sign that said “I support the abuse of children.” It was impossible not to feel ashamed; also, very angry.

In the years that have passed much of the animus has shifted to the church officials who did (and in some cases continue) to hide, evade and refuse to take responsibility for these terrible crimes. Still, every meeting I walk into, I assume there’ll be someone wondering what might be wrong with me, whether I’m a possible danger to their children, homophobic, a misogynist or something else.

And given the church’s track record I actually think that’s only fair. I’m surprised how many people still lend us their trust so easily today. During my training I spent three and a half years working as an English teacher on the Pine Ridge Indian Reservation in South Dakota. Our students and their parents bought into none of the typical “Whatever Father Wants” pedestal raising. We had to earn what trust they gave us, and it was hard, and to my mind that’s how it should be. Honestly, I’d take five congregations of people who start skeptical of me over one filled with warm adoration.

In recent years we’ve heard lots about the drop in attendance at Catholic Masses, usually without much connection made to the crisis that unfolded through the last decade. As though that’s all over now.

Part of that’s because those events are so sealed into our consciousness today. It’s interesting, parts of “Spotlight” actually seem dated already, like movies where they don’t have cell phones. How was there ever a time when the press or any of us didn’t know about the abuse that took place?

But in fact 13 years is not that long at all. And for as much as local church officials and the Vatican have put into place new safeguards, I think deep down people know that the real change that has to happen in the church, the greater change of heart in which protecting the institution is no longer more important than the people that it serves (or for that matter Jesus Christ), has yet to happen. The abuse crisis is still “this thing we got dragged into,” rather than a series of catastrophic decisions that demand we reconsider how we are as church; our path to a humbler, more contrite, Christ-centered church.

Sometimes I meet a priest from another nation who comments on the situation here and then pronounces, “We don’t have that problem in my country.” And all I can think is, when will that time bomb go off? How many more decades of violence and cover-up will there be?

We saw another form of this resistance at the recent synod—not just the overreaction of some to something as basic as forgiveness, but all the photos of celibate men talking amongst themselves about how others should live their lives. More than one Mass-going married friend has confided in me how strange those images made them feel, how alienating and disconnected even as they felt the possibility within those meetings of great change.

At the end of “Spotlight” I wanted to stand up and apologize to everyone in the theater. This isn’t the church any of us signed up for, least of all the tens (hundreds?) of thousands of people whose lives have been irreparably harmed by these crimes. It makes perfect sense to me that a lot of people would continue to stay away from us, maybe even for quite some years to come.

That’s not to say I don’t think the church has the capacity to be an agent for good or a revelatory image of the living Christ once again, or that it isn’t also one now.

But it looks like we are still in the early “Will we or won’t we?” days of taking that hard look at ourselves that history demands. The Boston Globe stories, the Dallas Charter, even the papacy of Pope Francis are just the beginning of a much longer process of reformation of our church. And as the Synod’s dramatics have made clear, a pope can lead, but he cannot legislate conversion into existence. The hierarchy has to in large part embrace it for themselves.

We can worry about drawing larger numbers, but I think to do this is to largely miss (or avoid) the real need, which is our community getting to the point where it will face the black depths of our sinfulness as an institution, and let those painful truths shatter our defensiveness and our complacency so that we might become so much more that kingdom of mercy and service that we are meant by God to be.

Until we do that, “Spotlight” isn’t a story of the church’s terrible, unforgivable, tragic past. It’s a tale of a still ongoing calamity.

Jim McDermott
@PopCulturPriest
Show Comments (
3
)
Comments are automatically closed two weeks after an article's initial publication. See our comments policy for more.
William Rydberg
7 years ago
Padre, I am fully on board with the need to change process as well as change hearts. What has happened is in my humble opinion, is beyond words. However, could you not have used a word other than reformation. When I check all of the dictionaries, in my opinion they suggest that the deviant behavior was how a given institution was designed... I think that if you undertake a word-study you will understand why even your own Catholic Jesuit scholars called their efforts counter-reformation. Man, some days, do I ever miss Fr. John A. Hardon SJ. God bless...
Molly Roach
7 years ago
Thank you for this nakedly honest reflection on where we are:a priest centered church in a lot of trouble it doesn't really want to look at yet.
robert hoatson
7 years ago
As a victim/survivor of multiple acts of sexual abuse as child and young adult (in the religious order in which I spent 23 years of my life), and as a victim/survivor of the 14 years I spent in the priesthood (having been fired and suspended for supporting victim/survivors of sexual abuse), I can assure the author that we are no closer to cleaning up the sexual abuse crisis than we were a hundred years ago. His own Jesuit religious order, at least in the Northeast region, doesn't even offer to pay counseling for a Jesuit victim/survivor unless and until the Province does a thorough investigation of the charges. This policy flies in the face of the protocol of the USCCB which recommends that counseling be accorded a victim/survivor as soon as an allegation is made. Perhaps the author could research his own backyard and encourage changes in policy.