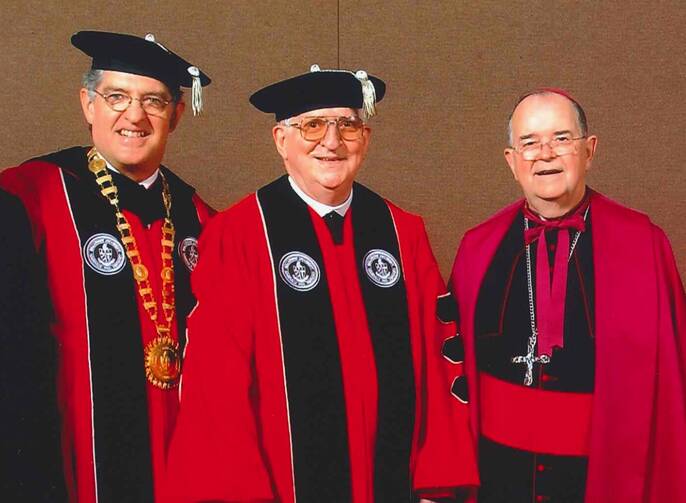 Brother Patrick Hart, O.C.S.O., who served as the last secretary to Father Louis Merton—better known as Thomas Merton, the heralded Trappist monk and author of the spiritual classic The Seven Storey Mountain—died at the age of 93 on Feb. 21. After Merton’s death, he became the literary executor of Merton’s works and the custodian of the legacy of the 20th century’s most prominent religious seekers and teachers.

A native of Green Bay, Wis., Brother Hart was born on June 14, 1925. Two important events in his life both occurred two days after his birthday: the first when he entered the Brothers of the Holy Cross at Notre Dame on June 16, 1947, and the second when he entered the Abbey of the Gethsemani exactly four years later. He put on the Cistercian habit in 1951 and took his solemn profession of vows in 1957.

Brother Hart became the secretary to Thomas Merton in the summer of 1968. Little did he know that it would be for mere months; in December, Merton died from an accidental electrocution while attending a religious conference in Thailand.

Among his other accomplishments, Brother Hart was appointed to the staff of the Trappist Generalate in Rome in 1966. After Merton’s death, he was a member of the board of directors of Cistercian Publications and was editor-in-chief of Cistercian Studies Quarterly; later he served as book review editor for the Quarterly.

Brother Hart attended to the details of Merton’s publications and his voluminous correspondence as Merton prepared for what would be his last journey.

As secretary, Brother Hart attended to the details of Merton’s publications and his voluminous correspondence as Merton prepared for what would be his last journey. That trip was to take him to India and Sri Lanka as well as Thailand.

Because of his connection to Merton, Patrick Hart ended up having a literary career of his own. He edited many collections of Merton’s works, such as The Asian Journal of Thomas Merton, The Monastic Journey, and The School of Charity. Brother Hart also published volumes of Merton’s letters and correspondence, which ranged over a wide variety of topics but principally concerned his views on the church and wider society, as well as the theme of war and peace. In 1974, he edited Thomas Merton/Monk: A Monastic Tribute, which won the Catholic Press Association’s Religious Book Award.

Can Thomas Merton help us deal with the crises of our time?
The Editors

Brother Hart also co-founded the International Thomas Merton Society at Bellarmine College, served as the general editor of “The Journals of Thomas Merton” series of books and was appointed a Merton Fellow at the Merton Research Center of Marshall University, in Huntington, W. Va., in 1994. While the bulk of his writing concerned Merton, he was no less interested in studies on the monastic life, particularly on Celtic monasticism, about which he wrote numerous articles.

By being in the service of his fellow monk, Brother Hart served God, his religious community and the wider church. He may not have been widely known outside of religious circles, but those who knew him will remember him as a simple, good and devout man. Perhaps that is as good a summary of a life that can be offered and one which Brother Hart himself would concur. Faith, not fame, was his life’s work.

Rest In Profound Peace Patrick Hart. Though we are honoring the memory and legacy of Patrick Hart, it is also pertinent at this moment to recall some of the wisdom of the one who Patrick Hart served as secretary. And that is Thomas Merton. In his book Conjectures of A Guilty Bystander, Thomas Merton makes an observation about truth in the section of the book titled "Truth and Violence: An Interesting Era." That observation is relevant today at this moment. Merton writes: "We are living under a tyranny of untruth which confirms itself in power and establishes a more and more total control over men (a broad term for humanity-women and men) in proportion as they convince themselves they are resisting error...if we really sought truth we would begin slowly and laboriously to divest ourselves one by one of all our coverings of fiction and delusion...we have hated our need for compassion and have suppressed it as a 'weakness'...." (Thomas Merton : Conjectures of a Guilty Bystander , p68/9) That is the voice of the person who Patrick Hart served honorably as secretary. That voice is a witness to the present moment. Adieu Patrick Hart, may your gentle soul rest in heavenly peace that passeth all human understanding.