Hysterectomy can be morally licit in limited situations, Vatican says 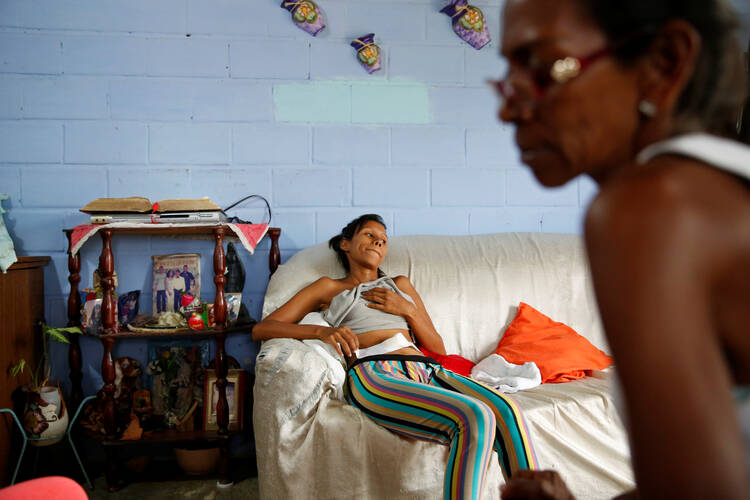 A woman in San Francisco de Yare, Venezuela, rests on a couch in her home while she recovers from a sterilization surgery in 2106. The church teaches that sterilization is morally unacceptable, but a hysterectomy could be if the uterus could not sustain a pregnancy, said the Congregation for the Doctrine of the Faith. (CNS photo/Carlos Garcia Rawlins, Reuters)

VATICAN CITY (CNS) -- The Catholic Church teaches that sterilization is morally unacceptable, but a hysterectomy could be morally acceptable if the uterus could not sustain a pregnancy, said the Congregation for the Doctrine of the Faith.

Affirming past indications as to when a hysterectomy would be morally acceptable, the doctrinal congregation, in a note published Jan. 3, said that "when the uterus is found to be irreversibly in such a state that it is no longer suitable for procreation and medical experts have reached the certainty that an eventual pregnancy will bring about a spontaneous abortion before the fetus is able to arrive at a viable state," it would be licit to remove the uterus with a hysterectomy.

"Removing a reproductive organ incapable of bringing a pregnancy to term should not therefore be qualified as direct sterilization, which is and remains intrinsically illicit as an end and as a means," it said.

The congregation reaffirmed the three responses it gave in 1993 to questions concerning "uterine isolation" or tubal ligation and "related matters."

That document, signed by Cardinal Joseph Ratzinger, the future Pope Benedict XVI, said that because sterilization was not the primary objective it was morally licit to remove a "seriously injured'' uterus when it posed an immediate serious threat to the life or health of the woman even though permanent sterility would result.

"Removing a reproductive organ incapable of bringing a pregnancy to term should not therefore be qualified as direct sterilization, which is and remains intrinsically illicit as an end and as a means."

However, it rejected the idea of performing a hysterectomy or tubal ligation ("uterine isolation") when uterine damage did not pose a present risk to the life or health of the woman but would pose a danger only in case of a future pregnancy. In those cases, it said, such medical procedures would amount to being direct sterilization, which remains illicit.

In the latest response to "a question on the liceity of a hysterectomy in certain cases," the congregation said, "in recent years some very specific cases have been submitted to the Holy See" concerning "a different issue from that which was examined in 1993, because they regard situations in which procreation is no longer possible."

What made the new question different was "the certainty reached by medical experts that in the case of a pregnancy, it would be spontaneously interrupted before the fetus arrives at a state of viability. Here it is not a question of difficulty or of risks of greater or lesser importance, but of a couple for which it is not possible to procreate," the congregation said.

But, in the cases referred to in the new document, "it is known that the reproductive organs are not capable of protecting a conceived child up to viability, namely, they are not capable of fulfilling their natural procreative function."

"The objective of the procreative process is to bring a baby into the world, but here the birth of a living fetus is not biologically possible," it said. "Therefore, we are not dealing with a defective or risky functioning of the reproductive organs, but we are faced here with a situation in which the natural end of bringing a living child into the world is not attainable."

"The medical procedure should not be judged as being against procreation, because we find ourselves within an objective context in which neither procreation nor, as a consequence, an anti-procreative action, are possible," it explained.

Evaluating whether a pregnancy could or could not be viable "is a medical question," the congregation said, and "one must ask if the highest degree of certainty that medicine can reach has been reached" so as to recognize whether the medical response has been made "in good faith."

The congregation added that its note was not an endorsement of a hysterectomy as being the only or best option since there are other morally licit options in cases of severe uterine damage such as abstaining from sexual intercourse during fertile periods or total abstinence.

"It is the decision of the spouses, in dialogue with doctors and their spiritual guide to choose the path to follow, applying the general criteria of the gradualness of medical intervention to their case and to their circumstances," it said.

I do not see why a hysterectomy would even be considered absent serious injury or disease. Though I admit I do not know if there would be reason in third world countries, I do not understand why there would be.

The men of the church should state the proliferation stance of the church but then leave a woman to decide what to do with her body to HER and her doctors, and her conscience. And she should not be asked to risk HER life for a doomed pregnancy.

The men of the church should state the proliferation stance of the church but then leave a woman to decide what to do with her body to HER and her doctors, and her conscience. And she should not be asked to risk HER life for a doomed pregnancy.

What a bunch of gobblygook! The church, especially the male hierarchy, should stay out of women's medical decisions. If her doctor thinks a hysterectomy is necessary, the woman should get one, if that is her choice, and it would not be a sin. Stay out of it!

There are many conditions of the female reproductive system which make a woman ill, gravely ill or in danger of death.
Most of them will be cured by a hysterectomy, the operation is done to cure the disease or to preserve life or to restore her to normal quality of life and it is just a side effect that the woman is sterilised - never any of the business of any cleric.