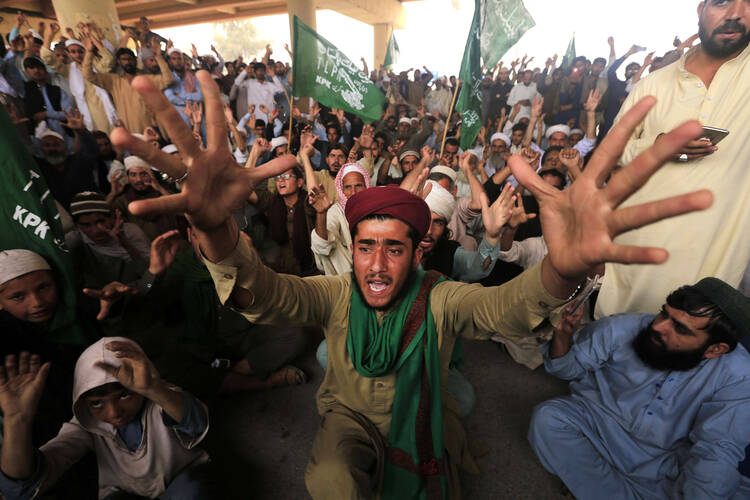 Pakistan’s Supreme Court has overturned the death sentence of Asia Bibi, a 47-year-old Pakistani Catholic and mother of five children who has been in prison since 2009 and was sentenced to death in November 2010 on charges of blasphemy against the Prophet Mohammed. She has always denied the charges and protested her innocence.

Pakistan’s Chief Justice Mian Saqib Nisar, assisted by Justice Asif Saeed Khosa and Justice Mazhar Alam Khan, announced the verdict on Oct. 31. The chief justice read out the ruling and said Asia Bibi can be released immediately from the prison near Lahore, where she has been on death row for eight years.

“I can’t believe what I am hearing. Will I go out now? Will they let me out, really?” Agence France Presse quoted Asia Bibi saying by phone.

Pakistan’s Supreme Court has overturned the death sentence of Asia Bibi, a Catholic mother of five.

Her husband, Ashiq Masih, expressed his family’s joy after the landmark verdict. “We are very happy. This is wonderful news. We thank God very much that he’s heard our prayers and the prayers of so many people,” he said, according to humanitarian group Aid to the Church in Need.

It was a courageous decision by the Pakistani judges, who issued their verdict notwithstanding strong protests earlier this month, led by the extremist Islamic group Tehreek-e-Labaik, that called for Asia Bibi to be hanged for allegedly making derogatory remarks about the Prophet Muhammad during an argument with a Muslim farmworker. The protests started when it became known that the Supreme Court was reviewing her case. On Oct. 8, the court reserved its judgment on the blasphemy charge against her and barred electronic and print media from covering the case until it had announced its decision.

Asia Bibi was the first woman to be condemned to death in Pakistan for blasphemy. Her death sentence was suspended in July 2015, but she has remained imprisoned in solitary confinement until today’s verdict. Her release has not yet been confirmed.

It was a courageous decision by the Pakistani judges, who issued their verdict notwithstanding strong protests by an extremist Islamic group.

In a statement issued after the verdict, Samson Salamat, the Christian chairman of the interreligious Rawadari Tehreek (Movement for Tolerance) said, “This is a highly tense and threatening situation for religious minorities, especially for Pakistani Christians, and there is fear of persecution of Christians and attacks on their churches and other properties.” UCANews, the main Catholic news agency in Asia, reported his statement.

Mr. Salamat called on the government of Pakistan and the Supreme Court “to take notice of the threats made by [Tehreek-e-Labaik leader] Khadim Rizvi and his group prior to the announcement of the Asia Bibi verdict” and appealed “for a ban of Tehreek-e-Labaik, and all similar extremist groups who are involved in hate speech and use religion as a tool to promote violence in society.”

On behalf of his movement, Mr. Salamat also called on the government and law enforcement agencies “to beef up security and ensure the deployment of military troops to safeguard the lives and property of religious minorities, especially the Christian community.”

“There is fear of persecution of Christians and attacks on their churches and other properties.”

Mr. Rizvi, the leader of Tehreek-e-Labbaik, recently warned the judges, the government and local as well as international nongovernmental organizations of “dire” consequences if Asia Bibi was set free, UCANews reported. It said he also threatened Saiful Malook, the lawyer representing Asia Bibi in court. Mr. Rizvi announced that his movement would “hold massive protests and not let the government function if it releases Asia Bibi to appease the United States.”

Asia Bibi’s case gained enormous international attention, with over 400,000 people worldwide signing a petition for her release. In 2010, Pope Benedict XVI called for the charges against Asia Bibi to be dropped.

Pope Francis was among those who prayed and worked for Asia Bibi’s release. Earlier this year, the pope met her husband and daughter, Eisham Ashiq. He told Asia Bibi’s daughter, “I often think of your mother, and I pray for her.” He praised her as “a martyr” of our times.

Pope Francis praised Asia Bibi as “a martyr” of our times.

Ms. Ashiq told the pope, “When I met my mother before departing [from Pakistan], she asked me to give you a kiss.” She then embraced and kissed Francis.

When Mr. Masih, Asia Bibi’s husband, met Francis in the emotional encounter in the pope’s private library in the Vatican that morning, he said, “Holy Father, I ask you to pray, united in Christ, for my wife and for all the persecuted Christians.”

Christians are a tiny minority in Pakistan, a country of 200 million people, “estimated at three to four million faithful, and about half of them, at most around two million, are Catholic,” Cardinal Joseph Coutts, the archbishop of Karachi and the second cardinal in the history of Pakistan, told America on Oct. 26. He emphasized that Pakistan “is not an Islamic state, like Saudi Arabia. We’re a modern democracy and have just elected a new government two months ago, and we have freedom of religion.” But, he acknowledged, there are “extremist elements in the country.”

He described Asia Bibi’s case “as very complicated because of the extremism in the country” and noted that “even the government has to play it very carefully, very cautiously.” He recalled that the Supreme Court judge who had been originally assigned to hear the case “recused himself” because he feared the extremist groups. But subsequently, he said, the chief justice announced that he himself would hear her case.

The cardinal said: “There have already been protests, and it’s very easy to incite the crowds when they [the extremist leaders and imams] claim that ‘our faith is in danger, Islam is in danger,’ and say, ‘We have to ensure order because we are doing the will of Allah.’ And they blame people like the judges from preventing this and so incite the people.”

As late as last Friday, Cardinal Coutts told America he “could not predict what would happen” but insisted that “it is important to pray.” He recalled that Pope Francis and very many people across the world are praying for her release. “There is a lot of support in the country, too, for her release,” he said. “There is support from many right-minded people in Pakistan; not everybody is screaming for blood.”

The Pakistani cardinal said, “We pray that justice may be done and that, if she is freed, and when she is freed, there may not be a violent reaction from the extremists.”

The BBC reported, hours after the verdict, that the court decision “has set off violent protests by hardliners who support strong blasphemy laws,” and demonstrations are being held in Karachi, Lahore, Peshawar and Multan. It said the Red Zone in the capital Islamabad, where the Supreme Court in located, has been sealed off by police.