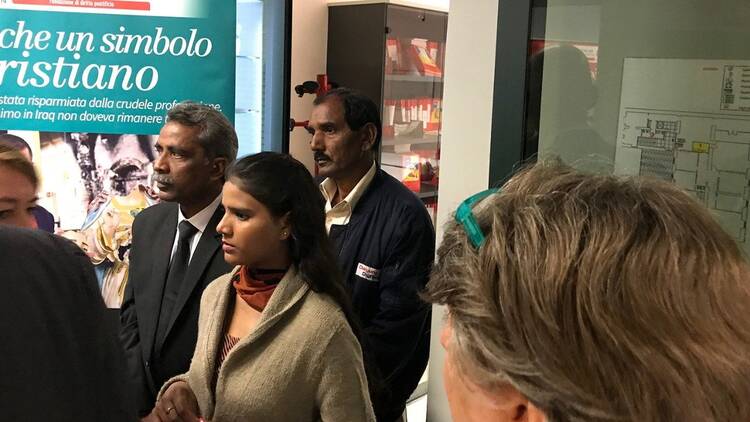 Asia Bibi's husband and her daughter Eisham arrive in the Vatican prior to a private meeting with Pope Francis. (Credit: Vatican News)

“I often think of your mother and I pray for her,” Pope Francis told Eisham Ashiq, the daughter of Asia Bibi, a Pakistani Catholic mother of five children who has been under sentence of death since November 2010 on charges of blasphemy against the Prophet Mohammed.

Asia Bibi was the first woman to be condemned to death in Pakistan for blasphemy. Her death sentence was suspended in July 2015, but she remains in prison in solitary confinement.

Eisham told the pope, “when I met my mother before departing (from Pakistan) she asked me to give you a kiss,” the daughter said and then embraced and kissed the pope. Earlier, she told Vatican News that the family believes Asia Bibi will be released from prison soon but will have to leave Pakistan immediately after her release, as her safety cannot be guaranteed.

When Asia Bibi’s husband, Ashiq Masih, met Francis in the emotional and profoundly moving encounter in the pope’s private library in the Vatican this morning, he said, “Holy Father, I ask you to pray, united in Christ, for my wife and for all the persecuted Christians.”

Christians are a tiny minority of 5 million faithful (including 3.5 million Catholics) in this majority Muslim country of over 190 million people.

Asia Bibi, in prison since 2009, has denied the charges, and her case gained enormous international attention with over 400,000 signing a petition for her release. Pope Benedict XVI called for the charges against Asia Bibi to be dropped.

At this morning’s meeting, Pope Francis also met Rebecca Bitrus, a young Nigerian woman who was kidnapped by Boko Haram in 2014 and who suffered much violence. Her 1-year-old son was killed, and she was tortured and raped and later gave birth to the child of one of her captors. When she escaped she took the child with her and welcomed the child into her family, and now says she forgives her captors.

“The witness of Rebecca and Asia Bibi are a model for a society that today has ever more fear of suffering,” the pope said. He declared that the two Christian women “are martyrs.”

During the private audience, Pope Francis prayed for Asia Bibi and for the women who are still prisoners of Boko Haram, according to a statement from Aid to the Church in Need, which organized the meeting. Aid to the Church in Need, an international pastoral aid organization of the Catholic Church which helps suffering Christians in 140 countries, brought Asia Bibi’s husband and daughter and Rebecca Bitrus to Rome to give witness in a ceremony at Rome’s Colosseum this evening to draw attention to the persecution of Christians in many lands today. The Colosseum, the place where many early Christians suffered martyrdom, will be lit up in red as a sign of solidarity with all those who are persecuted for their faith. Vatican News said that 3,000 Christians have died for the faith in 2017. It added that the Maronite Cathedral of St. Elijah in war torn Aleppo, in Syria, and St. Paul’s church in the Iraqi city of Mosul will also be illuminated in red symbolizing the blood of the many recent Christian martyrs there.”

During the audience today, Pope Francis thanked the leaders of Aid to the Church in Need and told them “you do good.”