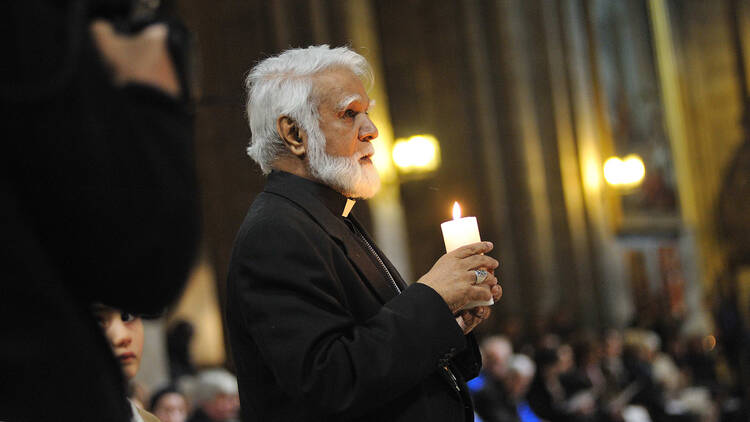 Archbishop of Karachi Joseph Coutts, shown in 2016, is scheduled to be elevated to cardinal June 29, 2018. (Photo courtesy of Creative Commons)

LAHORE, Pakistan (RNS) — Pakistan’s second-ever cardinal of the Catholic Church is slated to be installed on Friday (June 29).

In May, Pope Francis tapped Archbishop of Karachi Joseph Coutts to be among 14 new cardinals. Coutts would be only the second Pakistani cardinal, after Joseph Cordeiro, who was named by Pope Paul VI in 1973 and died in 1994.

The celebration among Pakistanis was swift, said Coutts, 72.

“After the news of my appointment as cardinal came in, I was genuinely overwhelmed by the love I received from the common people, politicians and the media in the country. It was heartening that everybody considered it a great honor for Pakistan,” said Coutts, the top Catholic clergyman in Pakistan since 2012. He will remain in Pakistan as archbishop of Karachi while taking on additional cardinal responsibilities.

Christians are the second-largest religious minority in Pakistan, constituting about 4 million of the majority-Muslim population of 208 million, and are considered to be a persecuted minority. Some Catholic leaders hope Coutts’ appointment will bring international attention to their issues.

“We are a religious minority in Pakistan, but now our voice can be heard well in the universal church,” said Cecil Shane Chaudhry, executive director of the National Commission for Justice and Peace of Pakistan, a human rights organization formed by the Pakistan Catholic Bishops’ Conference. “Archbishop Coutts is a visionary with immense knowledge and in-depth understanding of political matters.”

In its 2018 ranking of the 50 countries where it’s most dangerous to be a Christian, the nonprofit Open Doors USA ranked Pakistan at No. 5. The World Watch List noted that much of the persecution comes from radical Islamic groups that flourish under the favor of political parties, the army and the government.

In recent months, militants have launched deadly attacks on the Christian community in the southwestern city of Quetta. On Easter Monday, Islamic State gunmen killed four men from a Christian family. An attack by unidentified gunmen on churchgoers resulted in two deaths on April 15. And in December 2017, suicide bombers attacked Bethel Memorial Church, killing nine people.

“When we were growing up we hardly faced discrimination on the basis of being Christian,” said Komal Francis, 43, a teacher in Lahore. “Now my son is bullied in school and no one even wants to sit next to him in class.” Recalling an incident last year in the southern city of Burewala in which a Christian boy was beaten to death on campus, Francis said she was scared for her son.

“I tell my son to ignore and never respond to the slurs that are hurled at him, but honestly I fear, what if some children beat him up?” she said.

In May, Pope Francis tapped Archbishop of Karachi Joseph Coutts to be among 14 new cardinals. Coutts would be only the second Pakistani cardinal, after Joseph Cordeiro.

Debating aspects of Islam in public, referring to the Prophet Muhammad disrespectfully on social media and even liking posts perceived as anti-Muslim content on Facebook and other social media platforms are a few of the acts that can lead to charges.

This February, Patras Masih, 16, was accused of posting a blasphemous picture in a Facebook group. He surrendered to the police after a mob threatened to burn down his Christian neighborhood.

Officials from the Federal Investigation Agency apprehended his cousin, Sajid Masih, 24, a janitor, and brought him to Lahore for questioning. Sajid Masih said he was beaten up and ordered to perform oral sex on his cousin. Not wanting to comply, Sajid jumped from the fourth floor of a building and injured himself.

According to the commission’s report, about 100 blasphemy cases have been registered since 2011 and nearly as many people are currently serving prison sentences for blasphemy charges. Approximately 40 of those imprisoned are awaiting the death penalty or are serving life sentences.

Pakistanis who are convicted of blasphemy include Christian mother Asia Bibi, who was sentenced to death by hanging based on allegations of blasphemy in 2010 and who has been in jail since then awaiting appeal. In February, the Colosseum in Rome was lit in red as a symbol of solidarity with Bibi and other persecuted Christians around the world.

“Anybody can be a victim of blasphemy (laws),” said Coutts. Salmaan Taseer, a state governor, was gunned down in 2011 after intervening on Bibi’s behalf, and a Pakistani minister who called for changing the blasphemy laws was killed by gunmen the same year.

Citing the example of university student Mashal Khan, who was lynched on rumors of blasphemy in Mardan in March, Coutts expressed concern over misuse of the blasphemy law.

“The law is being misused so freely and there is total emotionalism in it,” he said, adding that many Pakistanis turn to mob violence when someone is accused of blasphemy. “Without logic they join and kill.”

Now, taking up his new post, Coutts said he wants Pakistanis to find peace in their hearts.

“Today it is the Christians,” he said. “Tomorrow it will be another weaker community who is a target of society’s discrimination and injustice. It’s a constant struggle. We will try to reach out and help whenever we can.”