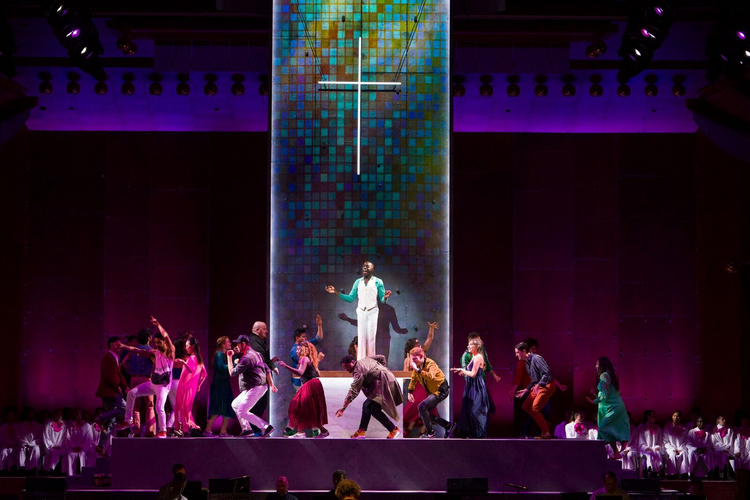 Ronald Peet, a member of the Street Chorus (center) and the cast of Lincoln Center’s production of Leonard Bernstein’s "Mass" at the 2018 Mostly Mozart Festival. Photo credit: Richard Termine.

On July 17 and 18 in New York, Leonard Bernstein’s rarely staged work “Mass: A Theater Piece for Singers, Dancers, and Players” was performed as part of Lincoln Center’s annual Mostly Mozart Festival. The work, commissioned by Jacqueline Kennedy Onassis for the opening of the Kennedy Center for the Performing Arts in 1971, has from its beginning been controversial with both religious and non-religious audiences. Basing itself on the movements of the Catholic Tridentine (pre-1962) Mass, the piece incorporates a variety of musical styles, lyrics in English and Latin, and a choir of “street protestors” to present a vision of faith and liturgy for the modern world. It was at first decried by many authorities in the Catholic Church, but by the year 2000 Pope John Paul II would invite a performance of the piece at the Vatican. The original itself was not created without Catholic consultation: Bernstein sought and received the advice of anti-war activist Daniel Berrigan, S.J., as he was putting the work together.

Leonard Bernstein's 1971 "Mass" retains its power, for reasons Bernstein could and could not have expected.

In this week’s revival, the piece, often referred to as a “pageant,” filled David Geffen Hall. The Young People’s Chorus of New York City stood behind the altar erected on the stage, and the Concert Chorale of New York was divided between the boxes on either side of the auditorium, echoing the choir stalls of a medieval chapel. The orchestral area was expanded to make room for the marching band and the additional blues and rock musicians required by the piece. This ensemble brought the piece vividly to life and propelled the often unwieldy movements through two hours without intermission. The “celebrant,” baritone Nmon Ford, provided a virtuoso performance of musical and physical prowess, remaining on stage for most of the show’s duration as a priest in growing conflict with his restless flock, desperately seeking a reason to believe.

A recent review by Zachary Woolfe in The New York Times was content to declare the piece a stale curiosity of its time. A religious assessment of the piece, however, suggests that it retains its power, for reasons Bernstein could and could not have expected.

To be sure, certain aspects of “Mass” reflect the time of its origin, from some of the sloganeering of the protest singers to the 1970s liberal Christian quest for a purer, more authentic religion behind (or below? above?) the ecclesiastical and sacramental accretions of the institutional church. Yet much of the piece is relevant today.

Most significantly, Bernstein uses liturgy to give voice to political unease. The cultural upheaval and political anxiety under which Bernstein wrote “Mass” bears a striking resemblance to our own time. (One stanza, written by Paul Simon, reads: “Half of the people are stoned/And the other half are waiting for the next election.” This sentiment may have resonated with a certain portion of the audience.) Bernstein’s integration of protest and praise draws on a long tradition of protest against the divine that has seen bold iterations in recent decades. One thinks of the Act Up protestors who—much like Bernstein’s street chorus—disrupted Mass at St. Patrick’s Cathedral during the early years of the AIDS crisis.

The cultural upheaval and political anxiety under which Leonard Bernstein wrote “Mass" bears a striking resemblance to our own time.

Bernstein helps us see that such actions were not so much the alien intrusion of protest into liturgy as they were the transformation of protest into liturgy—and liturgy into protest. “Mass”articulates the nexus, or perhaps dialectic, between protest and praise, and raises the question of whether and how the church today can embrace and give voice to the protests that are swirling outside of cathedral doors.

After a devastating scene in which the celebrant strips off his robes and smashes the monstrance and chalice onto the floor, the piece ends with the full company in unison returning praise, played in the hopeful key of D major. In his Timesreview, Woolfe interprets the peaceful, laudatory ending as “fundamentally, boringly conservative.” But this is to misinterpret Bernstein and the Catholic understanding of hope in the resurrection. Bernstein’s ending is not about the conservative triumph of order over chaos, the dispelling of doubt with a stifling certainty. The piece ends on a note of hope in the face of despair. It is a kind of new life that is only possible after the breaking of one’s heart and the dismantling of worldly idols.

The challenge of Bernstein’s “Mass” is whether the Christian liturgy can still welcome the protest of an uneasy world, and still provide it with a message of hope today.

The wealth of happiness and energy he radiated in music making is exceptionally uncommon and I don't know anybody with the conceivable exemption of Write My assignment For Me Cheap the still excessively youthful Gustavo Damsel who holds the light of having the capacity to interface with artists and laypeople alike.

This article also appeared in print, under the headline “Leonard Bernstein's liturgy—of and for the world,” in the September 3, 2018, issue. 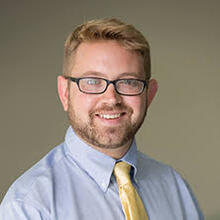 Kevin McCabe is a postdoctoral fellow in Seton Hall University's core curriculum program. He teaches and writes on Christian systematic theology and ethics.