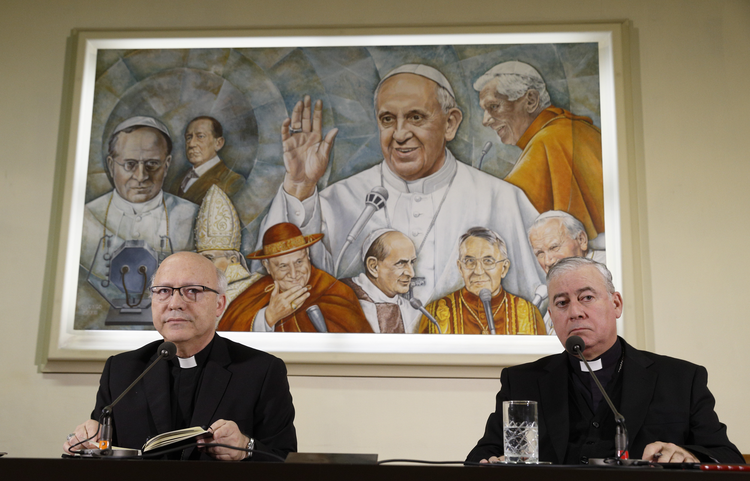 The 34 Chilean bishops have come to Rome “in pain and shame” because of the victims who have suffered abuse in their church, and they are conscious that as bishops they have erred. They have come “in a spirit of humility and openness,” willing to hear what Pope Francis has to say to them, and “ready to collaborate with him and do whatever he asks.” That was the message that two representatives of the Chilean bishops communicated to the international press at a conference at the Vatican Radio center on May 14.

The bishops had delegated two of their number to meet the press this evening: Fernando Ramos Pérez, the secretary general of the bishops’ conference and auxiliary bishop in the Santiago archdiocese, and Juan Ignacio González Errázuriz, the bishop of San Bernardo and a member of Opus Dei.

Bishop Ramos said they would have several meetings with Pope Francis over the next three days, starting early Tuesday afternoon, May 15, and continuing until May 17. They would meet him as a group “in a long synodal process,” which may not necessarily conclude in these three days, “to discern the short-, medium- and long-term measures” that need to be taken in the face of the present situation. They did not yet know if they will have individual meetings with him. Nor is it scheduled that they will concelebrate the Eucharist with the pope, he said. They did not know exactly how this whole process will unfold.

Bishop Ramos said they would focus on the triple forms of abuse that the pope identified: “abuse of power, abuse of sex, abuse of conscience.”

Bishop Ramos also said they would focus on the triple forms of abuse that the pope identified in his April 8 letterto the Chilean episcopate: “abuse of power, abuse of sex, abuse of conscience.” They would do so in “a journey of discernment,” in an attitude of “pain and shame”—pain because the victims of abuse have suffered “deep pain” and shame “because this abuse has taken place in church settings.”

Bishop González, who has been a member of the commission for safeguarding minors since 2011, admitted the bishops had not been prepared for this kind of problem in seminary, and so have made many mistakes by not recognizing the trauma that abuse causes in the victim’s life.

Bishop Ramos agreed: “We were not prepared for something such as abuse, and this was a shock for me. We were not prepared and were not able to understand what happened to the victims, but now we know.” He asserted that the causes why the abuse scandal happened “are many,” including weak spirituality, a lack of prudence and, especially, the formation of priests. “We made many errors,” he acknowledged.

Bishop González said the bishops now know they “must give the central place to the victims...but maybe we did not do it enough in the past.” Francis “has given us a clear example and we must do likewise,” he said. He said the pope has shown he is a true leader because “he knows how to say ‘I have made a mistake,’ and to ask pardon for that.” He described this as “an authentic example that we must follow too.”

His remarks were particularly interesting since the Chilean press has reported that in the past he has been close to Father Fernando Karadima, who was condemned by the Vatican in 2011 for abusing the three Chilean victims who met the pope in late April and early May. Bishop González has also been a strong defender of Bishop Juan Barros, whom those same victims accuse of being present at their abuse and covering it up, though Bishop Barros denies it. Asked about his relationship with Bishop Barros, Bishop González said he had befriended him in recent times “because he is a brother, wounded, alone and abandoned. I did it out of Christian charity, because Juan is very much alone and needs help.” But he said he had not heard from Bishop Barros for over two weeks.

Bishop González said the bishops now know they “must give the central place to the victims...but maybe we did not do it enough in the past.”

Bishop Barros, who the Chilean media say was in Spain for the past two weeks, is one of the 31 diocesan bishops and auxiliaries now present in Rome for the summit together. Also present are three emeriti, including Cardinal Francisco Errázuriz, 84, the former archbishop of Santiago who was a member of the Schoenstatt movement and of the pope’s council of nine cardinal advisors, and whom the three victims denounced as a criminal for covering up Father Karadima’s abuse of them. Asked what he thought about the victims’ verdict on the cardinal, Bishop Gonzalez said, “I well understand how the victims feel, they have suffered much,” but “I’d be careful of passing judgment.”

When asked if the Chilean bishops were prepared to give reparation to the victims of abuse, including financial payments, Bishop Ramos said they wished to offer “healing and reparation” in whatever way could help them, and that this could include giving money, something they have already done for some victims. “We are open to the various ways of making reparation, and that is one of them.” But the important thing, he said, is “to ask pardon, which is a moral imperative, and to offer reparation.”

Questioned whether they knew if any bishop had come to Rome ready to hand in his resignation to the pope, or whether they expected bishops such as Bishop Barros and the other three who were part of the Karadima circle to resign (or indeed whether, as some media report, that as many as 10 bishops would be replaced), both prelates said they had no knowledge of this. Bishop Ramos said it is up to the pope to nominate or remove a bishop and that “we are here to collaborate with him in whatever way he wishes.” Moreover, he said, it is up to each bishop to discern with the pope what is best to do.

As the one-hour press conference, most of it devoted to questions and answers, the bishops concluded by saying they had come “with open hearts, ready to collaborate with the pope” to respond to the victims and to renew the church in Chile.

Bishop Ramos described the Rome summit as “very important for the church in Chile, and for the People of God there, more than 90 percent of whom are not bishops, priests or men or women religious. It is a complex moment, but it is also one that offers us the opportunity for a great renewal in our church. We come here in a spirit of renewal and change.”

Bishop González added, “We have come to Rome to listen to Peter, who is Francis. He knows more than we do. We must follow Peter. When we follow Peter then we can hope for good things, new things.”

Update: May 15, 2 p.m. ET: Pope Francis had a first meeting with the 34 Chilean bishops this afternoon at 4 p.m. local time in the small hall of the Paul VI audience hall, the Vatican stated this evening. It said the pope will meet the bishops again tomorrow afternoon and will have two further encounters with them on Thursday, May 17.

The Vatican revealed that the pope gave each bishop a text with some themes on which to meditate. It gave no indication as to the contents of that text but said that “from this moment until their next meeting” the bishops “will dedicate the time exclusively to meditation and to prayer.”

Cardinal Marc Ouellet, the prefect of the Congregation for Bishops, is accompanying the pope at all these meetings, the Vatican said last Saturday. It also announced then that Pope Francis would not make any statement during or after the meetings, as these are confidential encounters.

They would focus on the triple forms of abuse...gmail sign up

Hopefully, there can be breakthroughs of reconciliation and conversion. What comes to mind:
(Mt 5:25–26): Settle the case quickly with your accuser while you are with him on the way, lest your accuser hand you over to the judge, and the judge to the officer, and you be thrown into prison. Truly I say to you, you will never come out of there until you have paid back the last penny!