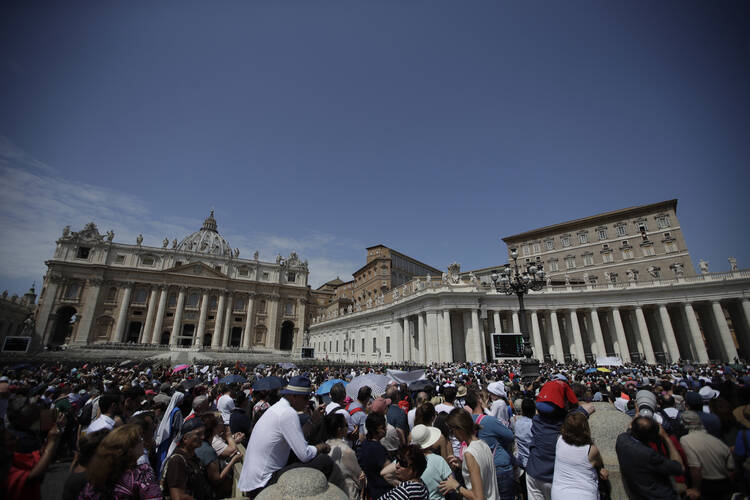 People gather in St. Peter's Square at the Vatican during the Regina Coeli noon prayer celebrated by Pope Francis from his studio window, second from right at top right, at the Vatican, Sunday, April 29, 2018. (AP Photo/Alessandra Tarantino)

The three Chilean victims of abuse by a notorious priest have each commented positively on their individual, two-hour long personal encounters with Pope Francis over the weekend. They have not revealed the content of their discussions with the pope, nor has the Vatican. This afternoon, Pope Francis will meet all three of them together.

Andrés Murillo, 43, a writer and philosopher, was the first to meet the pope. They met Friday afternoon, and after a two-hour long face-to face conversation, the Chilean sent two messages by Twitter, in Spanish, reporting on their encounter.

In the first he wrote, “I spoke with the Pope for two hours. In a very respectful and frank way I expressed the importance of understanding abuse as an abuse of power, the need to assume responsibility and care and not just pardon, and [I spoke] also of the postponed [or deferred, “postergado”] role of the woman and of the communities.”

In a second tweet, he said, “I only hope that this may be useful. That it may help to change all that is necessary so that the world may be a place that takes care of, accompanies in a healthy way, and does not that maltreat. And that the Catholic church may be an ally in this and no longer an abuser.”

James Hamilton, 52, a well-known gastroenterologist in Chile, met with Pope Francis on Saturday afternoon. Afterwards, he sent two messages by Twitter, in Spanish.

He sent a first brief message immediately after meeting Francis in which he wrote, “Very happy and satisfied.” Some minutes later he sent a second in which he said, “The encounter with the pope has ended, more than two hours, sincere, welcoming and enormously constructive.”

Juan Carlos Cruz, 55, a communications executive who now works and lives in the United States, and is the best known of the victims, met the pope on Sunday afternoon. After their private encounter, he sent the following message by Twitter, first in Spanish and then in English:

I spoke for more than two and a half hours alone with Pope Francis. He listened to me with great respect, affection and closeness, like a father. We talked about many subjects. Today I have more hope in the future of our church... Even though the task is enormous.

All three have fought for eight years in the public eye, and even longer in private, to have the truth of their accusations about their abuse and its cover by bishops recognized by the Catholic Church. They gained an important first recognition of the abuse in 2011 when the Vatican condemned their abuser, Father Fernando Karadima, 80, to a life of prayer and penance. But it is only now that they have finally gained full recognition of the justice of their cause, and it has come in the most dramatic way in personal encounters with the pope who had at first dismissed their allegations against Bishop Juan Barros and other bishops, as the Chilean hierarchy had done for many years.

On his return from Chile, however, Francis understood that the situation was not as he had long believed and so he sent the Maltese archbishop, Charles Scicluna, the Vatican’s top investigator of abuse by clergy to listen to the victims in New York and Chile, and report back to him. Archbishop Scicluna was accompanied by Fr. Jordi Bertomeu, a Spanish priest working in the Congregation for the Doctrine of the Faith which deals with abuse cases.

Having received Scicluna’s 2,300- page report, Francis set out to deal with this scandal in a decisive way. He summoned all the Chilean bishops to Rome, May 14-17, to discern together with him the measures that must be taken in the short, medium, and long terms to bring about justice and reconciliation in the church in Chile. But before meeting the bishops, Francis felt it essential to first meet the victims face-to-face, and so he invited them to come to the Vatican as his guests, with all expenses paid, to listen and talk with each of them individually, to ask their forgiveness for the wrong he had done them, and to hear their proposals to avoid this ever happening again.

During their stay in the Vatican they have been treated as the personal guests of the pope. Father Bertomeu is accompanying them throughout their stay in the Vatican. He took them to the Congregation for the Doctrine of the Faith and presented them to officials there, and he showed them other places in the Vatican. Yesterday he took them to a balcony of the Apostolic Palace from which, together with some family members, they watched Pope Francis recite the Angelus and speak to the 30,000 pilgrims in St. Peter’s Square.

I was abused by a Dominican priest in the late 60s to early 70s at St. Pius Church in Pilsen. The priest was named Father Dyer. He has since died.

I still stay up late at night thinking about the abuse. He would pull me out of class and abuse me. He coerced me to invite other young boys to come swimming with us at a high school run by the Dominicans. He had the keys. It was always on a Saturday when there was no one else in the building.

I dropped out of school. I turned to drugs. I know now that this is not uncommon for people who have been sexually abused.

I became sober when I was thirty-nine. I reported Dyer when I was forty-seven. I earned a masters degree in social work when I was fifty-one from the University of Utah, where I have lived since 1980.

There should be a permanent list of all priests who have abused children. There also should be a federal law prohibiting any statute of limitations for people who commit felonious acts on children. This should also include the ability to prosecute those who protect the serial pedophiles. There is no doubt in my mind that the Dominicans knew about George Dyer. He was transferred from parish to parish until I reported him in 2004.

Dyer was allowed to retire in peace in Huntsville, Alabama. He was never arrested. He was never charged. He was never punished for his crimes, which were many. I was not his only victim. He took advantage of me and used me to lure other victims.

If I remember correctly, the name of the school was Fenwick. He befriended me and invited me to swim with him at the pool on a Saturday afternoon. We were the only people in the building. At first, I thought that it was great that we had this pool all to ourselves. Then, he abused me. He pinned me in the corner of the pool. I tried to fight back, but he was too strong. He tried to calm me by saying that this would only take a moment.

It took a lifetime.

Had I been a child today, I would have a diagnosis of being on the spectrum. It is obvious to me that Dyer saw that I was a child with special needs and he took advantage of it.

Dyer coerced me to invite more children to join us for swimming on Saturdays at Fenwick. I thought that I would be safe at the pool if more people were around.

Dyer fondled every boy whom I invited. He continued to abuse me. He abused me during the week. It was hard to avoid him. He lived at the parish while he was attending the University of Chicago. I went to the parish school at the time. He would go to my class and ask the nun to let me out so I could help him. Then, he would take me for a ride in a car and abuse me. This happened multiple times

I missed a lot of school. The nuns questioned my mother as to why I was frequently absent. They thought that I was bullied. How do I tell someone? Kids were not educated back then as to what child sex abuse was. Dyer was a priest. He was a representative of Christ on earth. No one would believe me. I must have asked for it.

The principal took me to her office on the last day of school. She yelled at me for missing so much school. She said if I was sick then maybe I needed to be hospitalized. She did not let me return to St. Pius. There have been times I wish I could go back in time and advocate for my twelve-year-old self and yell back at the principal "If your priests would not try to sexually abuse me during the school day, perhaps I would feel safe coming to school."

It feels good just writing that.

I attended the local public school, Peter Cooper, the next year. It was the best thing that could have happened to me. I could be a boy, again. I did not have to be taken out of class to be abused. I went to class to learn.

I was very confused by all this. It is easy to see how and why I turned to hard drugs.

I feel much guilt because I invited other children who were abused. I was only a child and I was manipulated by an evil man, but I cannot forget it. Perhaps, it is my neurological make-up that prevents me from forgetting.

I am now sixty-one years old. My health is failing. I have a serious heart condition along with other major health ailments. I doubt if I am around to see my 14-year-old son graduate from high school.

I would like to heal before I die. I recently asked the Dominicans in Louisiana, where Dyer was based, to pay for counseling. They refused. They originally offered to pay for it in an e-mail that they sent me when I first reported the serial pedophile predator, George Dyer. But, now they refuse to pay for the counseling.

The Dominicans are more concerned about money than they are trying to help the survivors of their pedophile priests.

Writing this may be the closest I get to therapy.

Shame on the Dominicans for caring more about money that they do about the lifelong damage caused by their pedophile predators disguised as priests.