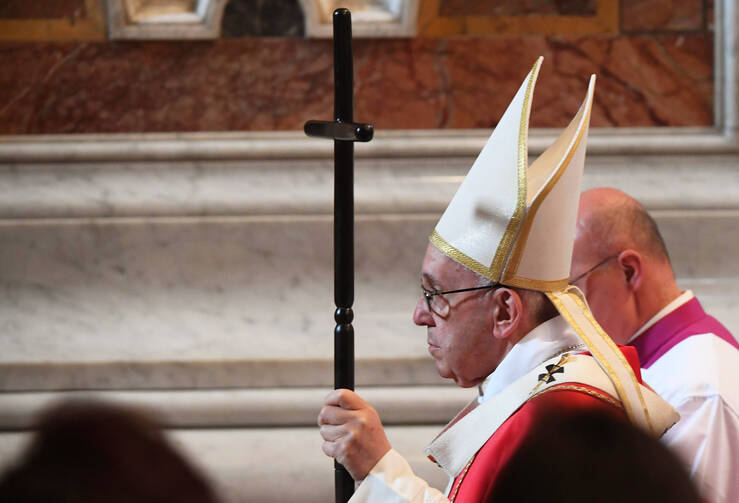 On Dec. 21, Pope Francis spent the morning addressing members of the Roman Curia. He focused on the need to reform the Curia, as well as the Curia’s relationship to the world outside the Vatican. That relationship must be characterized, he said, by a spirit of service. Later that afternoon at St. Peter’s Basilica, he offered the final prayers at the funeral of Cardinal Bernard Law, the former archbishop of Boston who had been appointed as the archpriest at Santa Maria Maggiore in Rome after being forced to resign as the sexual abuse crisis unfolded in Boston. As the cardinal was laid to rest, the church waits for Pope Francis to officially renew the mandate of the Pontifical Commission for the Protection of Minors, which had been allowed to expire on Dec.17. The official renewal is expected soon, with the membership of the commission to be announced in the new year.

It is typical protocol for the pope to offer the final commendation at the funeral of a cardinal in Rome, and long waits for official Vatican actions and announcements are nothing new. But the juxtaposition of these events is jarring to the world outside Rome. As attention is again focused on Cardinal Law, a symbol of the church’s abject failure during the sex abuse crisis in the United States, many survivors of abuse and other Catholics are wondering when the church will publicly hold bishops accountable for misdeeds and inaction in responding to sex abuse.

Pope Francis should recognize that, for the world outside the Vatican, much greater transparency is necessary. He should act swiftly to establish it.

Pope Francis’ apparent lack of urgency in re-appointing members of the sex abuse commission and the lack of clarity about how survivors will be represented among those members is alarming. Confidence in the commission was already damaged earlier this year when Marie Collins, the only survivor of sexual abuse still active on the commission, resigned in protest against curial opposition to the process of reform. Healing and reconciliation within the church would be assisted immeasurably by a clear papal statement recognizing the need for transparency around the work of the commission and the reforms it proposes.

Catholics are called to trust the church and its leaders, and they want to respond to that call generously. But in its handling of sex abuse, the church spent decades squandering that trust. Continued bureaucratic delay on the renewal of the commission further erodes that trust. The lack of clear public action to hold church leaders accountable for their role in allowing sex abuse to happen damages that trust as well. Pope Francis should recognize that, for the world outside the Vatican, much greater transparency is necessary. He should act swiftly to establish it.

"Catholics are called to trust the church and its leaders, and they want to respond to that call generously. But in its handling of sex abuse, the church spent decades squandering that trust. Continued bureaucratic delay on the renewal of the commission further erodes that trust. The lack of clear public action to hold church leaders accountable for their role in allowing sex abuse to happen damages that trust as well. "
-- Amen!

Pope Francis has done many good things in the last several years. However, he has not done anything of import when it comes to holding accountable the bishops who covered up the crimes of their priests, even those who contributed to the continuance of abuse by transferring priests from parish to parish. This is the biggest disappointment of his papacy, and, unfortunately, I no longer have any hope that he will do anything on this issue.

Cardinal Law should have been sentenced to a life of prayer and penitence at a strict monastery like The Grand Chartreuse and not the lavish exile and state funeral he received. While Pope Francis has been a breath of fresh air in so much he really has done nothing to resolve this deep structural sin at the heart of the church.

And the same week the report from Australia re clergy sexual abuse, pedophilia was released! Does no one think of the “visuals” of their words, actions? A quiet funeral mass at SantaMaria Maggiore not St Peters should have been celebrated. He soiled all his good work in civil rights with his shuffling cover ups.

Such a shame. He could have had a great civil right legacy and had a great influence on the racial climate today, if only for his poor handling of the abuse issue.

From your lips to the Pope's ears.

My suspicion is that he has realized that he is surrounded by pederasts in the Curia and in the greater episcopacy of the Catholic world, and that to force their removal would cause too great an upheaval in his Church.

Isn't it ironic that today we are witnessing Hollywood Moguls, Media Stars, and Politicians being pressured to step down or being fired for sexual abuse, yet the Church is dragging its feet in holding its bishops accountable for their role in the clerical sexual abuse scandal.

The vast majority of sexual abuse is done within families and by other children. Focusing on Catholic priests obscures the true vulgar criminals: relatives of victims

The vast majority of sexual abuse is done by people. Catholic Priests are people. And offend against children as often as others. What the focus needs to be on is protecting children from pedophiles. Whether Priest or family member.

What an egregious display of rank Misandrist Hypocrisy at 'Amerika-Mag Rag' this month.
Could it be the Editors are really so clueless as to
publish two contrasting articles, one about the Homosex Ephebophile Infiltration of the Priesthood and Targeting of Adolescent Boys = who are the overwhelming majority of Victims...
And another Pushing a Movie promoting Homosex Ephebophlie Abuse of Adolescent Boys!
Calling Pope Francis to "Restore Trust” after Cardinal Law’s funeral flies in the face of Promoting Homosex Rape of Adolescent Boys, at least to the rest of the world beyond the 'Amerika-Mag Rag' SJW Kulture Kampfers..

Want to know what is Rong about the Church approach to the GILBERT Gaystapo pushing Homosex Ephebophile Rape - read the fawning review of the new movie, pushing said Abuse of Adolescent Boys as one of
"The Top 9 Films From 2017
“Call Me by Your Name.” A nearly ethereal, tonally perfect film about sexual awakening... (as in awakening to Homosex Ephebophile Rape)

There is no "rape" in that film.