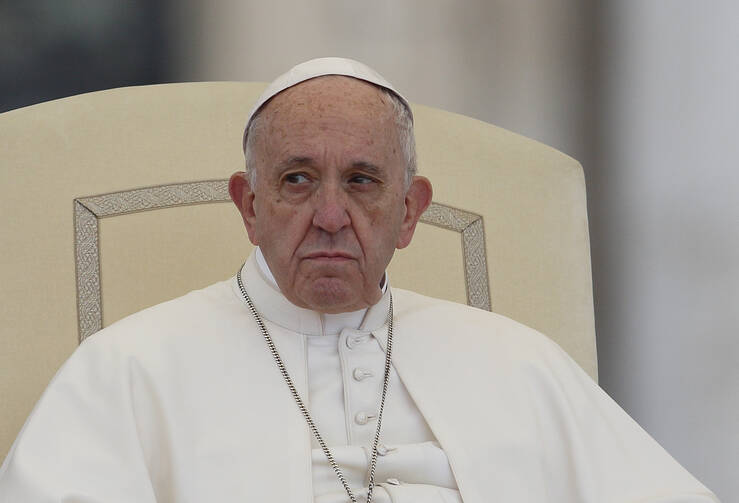 Pope Francis looks on during his general audience in St. Peter's Square at the Vatican Nov. 15. (CNS photo/Paul Haring)

Pope Francis will renew the mandate of the Pontifical Commission for the Protection of Minors for another three years, informed sources told America this week. Its membership, however, will not be announced until the New Year. While many of its current members will be renewed for a second three-year term, others will be replaced.

The news, which is expected to be announced in the coming days, comes after Francis met the full commission in a private audience in the Vatican on Sept. 21. He indicated then that he wished the P.C.P.M. to continue its work, or as he put it, “to continue to be of great assistance in the coming years to the pope, the Holy See, bishops and major superiors throughout the world.”

It remains unclear clear whether the commission will continue to include survivors among its members in its next three-year term.

He praised the commission for its work over the past three years and said, “It has continuously emphasized the most important principles that guide the church’s efforts to protect all minors and vulnerable adults.”

By doing so, he said the P.C.P.M. “has fulfilled the mission which I entrusted to it as an ‘advisory body at the service of the Holy Father,’ to offer its experience ‘for the purposes of promoting local responsibility in the particular Churches for the protection of all minors and vulnerable adults’” (Statute, Art. 1).

It remains unclear clear whether the P.C.P.M. will continue to include survivors among its members in its next three-year term, as it did in its first term. America has learned that there has been “considerable discussion” on how best to involve survivors in the work of the commission. While there is agreement that they “must have a voice” there is still discussion on the best ways to achieve that goal. It remains to be seen whether a decision will be taken on this issue before the commission holds its next plenary assembly, which has been provisionally set for April 2018.

‘America’ has learned that there has been “considerable discussion” on how best to involve survivors in the work of the commission.

Pope Francis told the commission members in September that he was encouraged by the fact that “many episcopal conferences and conferences of major superiors have sought your advice regarding ‘Guidelines for the Protection of Minors and Vulnerable Adults.’” He said the P.C.P.M.’s “cooperation in sharing the best procedures is truly valuable, especially for the churches with fewer resources for this crucial work of protection.”

The pope urged the commission to continue its cooperation with the Congregations for the Doctrine of the Faith and for the Evangelization of Peoples, “so that these measures may be inculturated in the different churches around the world.”

Pope Francis recalled that he had acted on the commission’s proposal regarding the accountability of bishops and religious superiors for the abuse of minors by promulgating on June 4, 2016, the motu proprio“As a Loving Mother,” which addresses “the cases of diocesan Bishops, Eparchs and Major Superiors of religious institutes who, through negligence, have committed or omitted acts that resulted in serious injury to others, or that affect a community in its entirety.”

“The church irrevocably and at all levels intends to apply the ‘zero tolerance’ principle against the sexual abuse of minors.”

In that motu proprio, Francis said that while canon law already provides the possibility of removal from ecclesiastical office “for grave reasons,” he decreed in that edict that from now on the “grave reasons” are to include “the negligence of bishops in the exercise of their office, in particular in relation to the cases of sexual abuse committed on minors and vulnerable adults.”

In his address to the commission, Francis stated clearly that “the church irrevocably and at all levels intends to apply the ‘zero tolerance’ principle against the sexual abuse of minors.” Aware that some in the media have reported or suggested that while the pope uses strong words in relation to sexual abuse of children, he is soft or “acts with mercy” when it comes to punishing those responsible for such abuse, Francis, speaking off the cuff, told the P.C.P.M. members that he has never given a pardon to a priest who has been found guilty of the sexual abuse of minors “and never will.”

“Whoever has been condemned for the sexual abuse of minors can appeal to the pope for a pardon,” he said, but “I have never signed one of these and I never will. I hope that is clear!”

“I am fully confident that the commission will continue to be a place where the voices of the victims and survivors will be heard.”

Then referring the commission’s outreach to survivors, Francis said, “I am fully confident that the commission will continue to be a place where the voices of the victims and survivors will be heard with interest as we have much to learn from them and from their personal stories of courage and perseverance.”

Pope Francis established the commission on Dec. 4, 2013, after discussing the proposal from his Council of Cardinal Advisors. The commission, which is chaired by Cardinal Sean O’Malley, was originally comprised of four women and four men—the first time a papal commission had an equal number of women and men.

On Dec. 17, 2014, the pope added nine members from all continents bringing the total number to 17: eight women and nine men (four of them clerics). Among them were two survivors of child sexual abuse: Marie Collins of Ireland and Peter Saunders of the United Kingdom.

Marie Collins resigned on March 1, in what was widely seen as a setback for Pope Francis’ effort in this field.

It was clear from the beginning, however, that Mr. Saunders understood his role differently from the other members: He appeared to view it primarily as that of an advocate for victims and so spoke out publicly as a member of the commission on specific cases, including on allegations against Australia’s Cardinal George Pell and Chile’s Bishop Juan Barros.

Sources say he also disclosed the contents of discussions at commission meetings that were meant to remain confidential. His situation became untenable within the commission and on Feb. 6, 2016, he was asked to take “a leave of absence his membership to consider how he might best support the commission’s work.” Since then he has not been involved in the work of the commission. While the terms of office of all members end on Dec. 17, Mr. Saunders chose to announce his resignation from that body some days earlier.

His resignation was of a very different nature to that of Marie Collins who resigned on March 1, in what was widely seen as a setback for Pope Francis’ effort in this field. She was a founding member of the commission and, in the words of Cardinal O’Malley, made “an extraordinary contribution” to defining its mandate and its subsequent work.

She attributed her resignation to “the lack of cooperation” of some Roman Curia offices with the P.C.P.M. She singled out the C.D.F. as well as unnamed Vatican officials that, she said, frustrated the best intentions of the pope because of their reluctance to implement the commission’s recommendations.

Ms. Collins expressed her willingness to continue to work with the P.C.P.M. and has done so in education efforts involving church leaders and the offices of the Roman Curia. She was praised for her significant contribution in September at a course for new bishops organized by the Vatican. Pope Francis also praised her on at least two occasions, including on Sept. 21, for her commitment and her important contributions.

The findings of the Australian Commission after their 4 years of hearings, interviews and investigations on the abhorrent child sexual abuse scandals involving Catholic clergy are all available at CRUXNow.com/news today and are online. They claim that Catholics have adapted a "let's move on" paradigm to deal with sexual child abuse. In my experience nothing could be further from the truth. I believe that Catholics and most good people who care about the health and welfare of children want them to be protected and they want to see that justice is done to their abusers. Another claim made by the Commission was that one of the reasons that priests abuse children is because they take a vow of celibacy which has been repeatedly proven to be untrue by renowned psychiatrists and medical physicians. The Commission also recommended that the seal of confession be abandoned when it comes to confessions involving child abuse. I do not know any Catholic who would advocate breaking the solid, spiritual bond of the confessional seal for any reason! And, there is no way that I will allow myself to be labeled with "let's move on". We all need to be the protectors or our children now and forever. Our vigilance must remain firm and strong! I am a retired elementary school teacher and I volunteer as a CCD teacher on Sundays at my Church. Every one of us must undergo mandatory child-abuse reporting classes and make a written commitment that we will follow the guidelines of the city, the state, and our Church in immediately reporting any suspicion or child sexual and/or child physical abuse. The people with whom I work are outstanding advocates for their students and staunch supporters of providing a safe place for children to learn, as well as a safe place to seek help and/or intervention on their behalf. People who care about children never would be adherents
of "let's move on" because we are committed to being life-long advocates for children.

Ms. Cox - I respectfully suggest you may be ignoring evidence to the contrary of your evaluation. When I was a volunteer coordinator of my diocese’s Protecting G-d’s Children program, I learned that all of those who regularly worked with children were following it except the priests, who were less than 50% compliant. When that was brought to the attention of the Vicar General, he took no action (I hesitate, for the sake of the Faithful, to quote his exact words). When I asked the USCCB’s Office of Child Protection when it’s annual “audits”, as they were euphemistically called, would measure and report on whether the diocese was actually doing what the Dallas Charter said would be done, I was told, in so many words, “that’s not our job”. So, I resigned in protest and joined Voice of the Faithful. One can question how effective it is in protecting kids but at least it is honest about how it goes about trying.