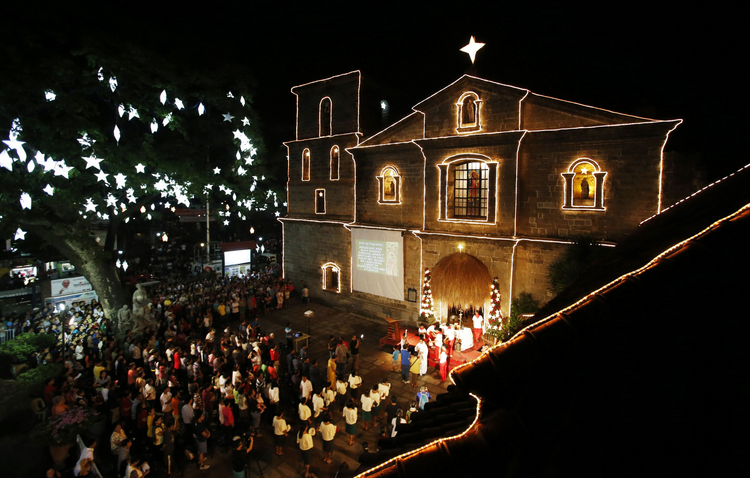 This time each year, Filipinos at home and abroad flock to churches in the early hours of the morning to celebrate Simbang Gabi, a novena of Christmas Masses. In the Philippines, where there is no need to wait until after Halloween and Thanksgiving, the popular Christmas season begins as early as September. For Filipinos living in the United States, it may be more difficult to start celebrating Christmas so early. But from Dec. 16 to 24, Filipinos across the globe turn to their cultural roots as they await the birth of Christ.

From Dec. 16 to 24, Filipinos across the globe turn to their cultural roots as they await the birth of Christ.

This tradition can be traced to Mexico, according to Victor Eclar Romero, an independent scholar of Philippine language and history. In the late 16th century, a Spanish Augustinian priest, Fray Diego de Soria, sent a request to Pope Sixtus V for permission to celebrate Mass outdoors at his mission in Mexico. The idea was to have outdoor Masses to encourage devotion among the indigenous population. The pope gave the Augustinians permission to hold these Masses from Dec. 16 to 24, and they came to be known as “Misa de Aguinaldo” for the Spanish word for Christmas present. (In Mexico, the Misa de Aguinaldo is tied to another ongoing Christmas tradition: Las Posadas.)

The Spanish-Mexican devotion made its way to the Philippines through the missionary efforts of the Augustinians and was picked up by other orders of missionaries. Indoor and outdoor Masses were celebrated at dawn so that Filipinos, who were mostly farmworkers and fishermen, could participate before going to work.

Simbang Gabi, which in Tagalog means “Night Mass,” is celebrated at dawn in many rural parts of the Philippines.

Simbang Gabi, which in Tagalog means “Night Mass,” is still celebrated at dawn in many rural parts of the Philippines. Around urban centers, parishes celebrate Simbang Gabi in the evenings to accommodate those with day jobs. The devotion to this novena is so popular that in recent years, bishops have asked priests to stop celebrating Simbang Gabi in shopping malls and other public places.

Each of the nine days leading up to Christmas is a fiesta in its own right. Churches are decorated with parol, which are star-shaped lanterns usually made of colored paper, bamboo or capiz shells. Choirs sing traditional Christmas hymns and are given special permission to sing the “Gloria,” which is usually omitted during Advent. Food vendors prepare Filipino delicacies for Massgoers to eat in church courtyards.

Each of the nine days leading up to Christmas is a fiesta in its own right.

Filipino immigrants have taken this beloved tradition wherever they go. Some parishes, like St. Francis of Assisi in New York City, observe the traditional novena Masses in the evenings. “Most of us feel homesick around Christmas time,” says Zeny Avila, an organizer of the parish Simbang Gabi celebration. “Simbang Gabi helps us to connect with our country and our relatives.” About 100 people fill the Manhattan church each night from all five boroughs. Although most of the Masses are in English, those in the pews said they relish hearing Mass parts like the Ama Namin (Our Father) and Kordero ng Diyos (Lamb of God) sung in their native language.

In suburban areas in the United States, Filipino groups often have a traveling Simbang Gabi, with different churches hosting Mass and a reception each night. With an enormous amount of Filipino food, Christmas caroling and folk dances, these celebrations are reminiscent of the earliest Simbang Gabi, when farm workers would be granted time away from the fields for their celebration.

Simbang Gabi speaks to the central place that Christmas holds in the Filipino imagination.

Simbang Gabi has also been passed down to the children of Filipino immigrants. At the University of San Francisco, they hold a Simbang Gabi Mass on campus every year before Christmas break. Because final exams usually fall before the traditional novena, campus Simbang Gabi is celebrated on one December night before the traditional novena. It started off with a small group celebrating at the Jesuit residence chapel, explained Evelyn I. Rodriguez, associate professor of sociology at U.S.F. Now, it is held at the St. Ignatius Church with guests from the community.

When asked why celebrations like this are important, Ms. Rodriguez told America that Simbang Gabi “really successfully bridges the gap of generations” and “connects Filipinos to their roots and religion.”

Merry Christmas from the Editors of America
The Editors

As with most immigrant groups, Filipinos have tight-knit communities. But Filipino parents are often encouraged not to teach their children Tagalog or other native dialects so they can more easily assimilate. While some first- and second-generation children belong to Filipino communities, students are often removed from these cultural enclaves until they come to college. Learning more about Filipino culture necessarily means learning more about the country’s Catholic identity. Simbang Gabi is a way to honor their heritage and to share the richness of Filipino traditions with their new communities.

Whether at home or abroad, these last days before Christmas are a very sacred time for Filipinos. They consecrate their days by attending Simbang Gabi and celebrating with each other. Yet, Simbang Gabi also speaks to the central place that Christmas holds in the Filipino imagination. From the time when Spanish rulers would offer workers a break during the Simbang Gabi fiesta to the country’s tumultuous presidency today, the story of a savior born into an impoverished corner of a corrupt world continues to give Filipinos hope.

Angelo Jesus Canta is a Joseph A. O’Hare, S.J., fellow at America.