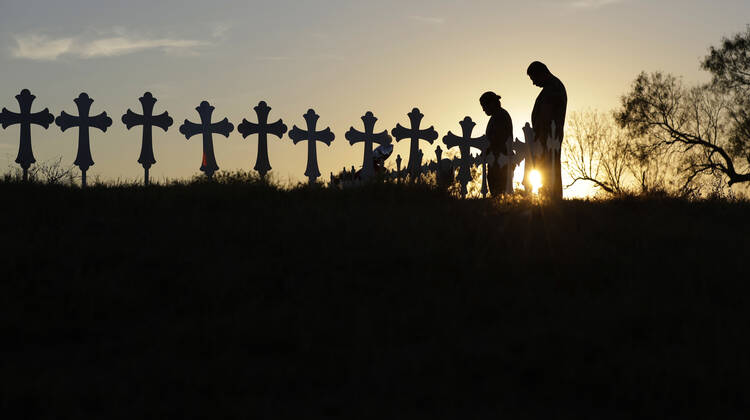 Isaac Hernandez and his wife Crystal visit a line of crosses before a vigil for the victims of the First Baptist Church shooting, Monday, Nov. 6, 2017, in Sutherland Springs, Texas. (AP Photo/David J. Phillip)

Pope Francis was “deeply grieved by the news of the loss of life and grave injuries caused by an act of senseless violence” at the First Baptist Church in Sutherland Springs, Tex., and sends his “heartfelt condolences to the families of the victims and the wounded.”

The Vatican made this known today and said the secretary of state, Cardinal Pietro Parolin, sent a telegram on the pope’s behalf to the archbishop of San Antonio, Gustavo Garcia-Siller.

Pope Francis sent his “heartfelt condolences to the families of the victims and the wounded.”

It said the pope asked the archbishop “kindly to convey his heartfelt condolences to the families of the victims and the wounded, to the members of the congregation, and to the entire local community.”

At least 26 people were killed and some 20 more wounded in last Sunday's shooting at the church in Sutherland Springs, a small town east of San Antonio. The victims ranged in age from 5 to 72 years old and included Annabelle Pomeroy, the 14-year-old daughter of the church’s pastor, Frank Pomeroy, who was out of town at the time of the killing.

There’s no problem with praying after a mass shooting—but what does that prayer look like?
Jim McDermott

Texas bishop in wake of church shooting: ‘No war, no violence, no guns’
Michael J. O’Loughlin

The killer was named as Devin Patrick Kelley, 26, a white man and former member of the U.S. Airforce, who was wearing black tactical gear and a ballistic vest when he pulled into a gas station across from the church and started shooting.

Pope Francis, the message said, also “asks the Lord Jesus Christ to console all who mourn and to grant them the spiritual strength that triumphs over violence and hatred by the power of forgiveness, hope and reconciling love.”

What about the Muslim "migrants" who terrorize and kill hundreds of people each year with trucks? The drug epidemic in the United States is a bigger issue than mentally ill mass shooters, statistically speaking. At least Trump cares, not sure about many others though.