The spirituality of the Sunday long run 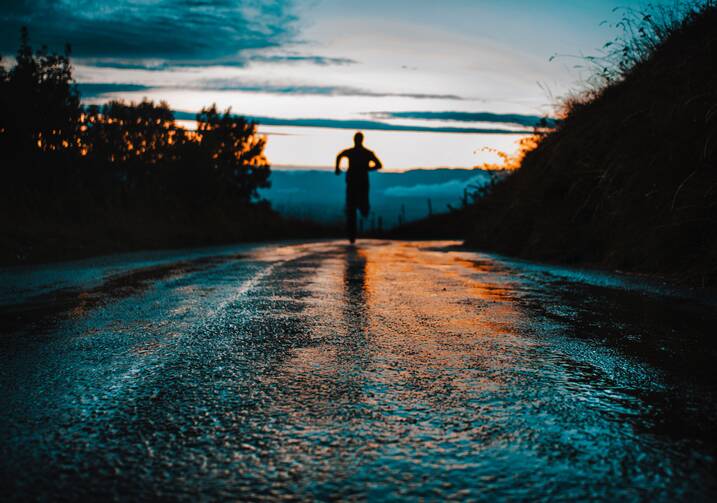 Photo by Lucas Favre via Unsplash

There is nothing intrinsically holy about a “16 Weeks to Marathon” spreadsheet, GPS watches or the neon accents of running shoes.

But, for a certain class of runners, there is no denying the spirituality of the long run. There are no pews, steeples or chapels in this church. It is a social movement complete with a hashtag. While it lacks specific ties to Christianity, “the Church of the Long Run,” as it is sometimes called, has become an important practice for Christians across denominations.

For a certain class of runners, there is no denying the spirituality of the long run.

Long runs, often done on weekends, have long been a mainstay of training programs from 5Ks to ultramarathons. Athletes build endurance by going long as they work toward their race goal. Yet for many, it often doubles as a spiritual experience featuring many aspects of prayer—a chance to quiet the mind, test personal limits and suffer on behalf of a mission.

“I often will be able to pray while I’m running because of that very peaceful experience of the very fluid moving of your body,” said Sister Stephanie Baliga of Chicago, a member of the Franciscans of the Eucharist. Sister Baliga raced for the University of Illinois and has since completed eight marathons.

“You live these experiences of runner’s high and this experience with connecting to God through the natural world that you sometimes feel when running,” she said. “[It is] a very spiritual and strong experience.”

Running alone can create an inner stillness, a prayerful, reflective experience different from playing team sports. Running without music, and especially in nature, is an excellent way to connect with God, Sister Baliga said.

In Dalton, Ga., Grove Level Baptist Church brought running and the Bible together. The church started a “Run For God” program, which paired 12 weeks of training for a local 5K with Bible study.

Gaye Coker enlisted with her husband Shannon in 2010. The couple was struggling with their faith because of an ongoing family issue, she said. “The strength and endurance Shannon and I have gained through this Run for God journey is not only physical but a spiritual relationship,” Ms. Coker said.

In the seven years since their first class, the couple has run more than 100 races, including a half marathon. The program has expanded and is now active in 49 states. Ms. Coker and her husband have lost 40 pounds each, she said. “We are healthier physically, yes, but more important we are healthier spiritually.”

The 49-year-old Texas resident began running several years ago to stay fit after losing weight. His running habit offers a great chance to pray, he said, even if he often questions why God would care whether he runs.

“As long as I’m focused on prayer, my running, my breathing and my pace all get into a nice groove.”

“I usually wonder why I’m out there,” Mr. Fischer said. “But I offer all that up for the suffering souls in purgatory and any of my friends that need prayers. Sometimes I turn that around and pray to the souls in purgatory to help me keep going.... I consciously offer up my aches and pains and frustrations for that intention.”

As the blocks become miles, he prays: “Eternal rest grant unto them, O Lord, and let perpetual light shine upon them. May they rest in peace.”

Prayer is often a good distraction from running, Brian Holdsworth said. The Edmonton, Canada, resident said he struggles when he thinks about running too much. “As long as I’m focused on prayer, my running, my breathing and my pace all get into a nice groove.”

Finding that groove saved his life, he said. About five years ago, he began developing chronic symptoms of muscle fatigue that changes to his diet did not fix. His doctors could not find a diagnosis. “I was fed up with this pattern of not being able to live my life and be there for my wife and children,” Mr. Holdsworth said. Then, he tried running.

Running helps build the mental and physical muscles to better withstand suffering when it is not voluntary.

His first run was just over a mile but his symptoms subsided for the rest of the day. Now, several times a week, he pulls his long hair back and slips on his worn Reebok shoes for a run in a nearby park. The mortification of exercise serves as a good reminder, he said.

“As a Christian, mortification and the redemptive qualities of suffering are a perfect fit with how I treat running,” Mr. Holdsworth said. “Christians see suffering as something that can be instructive, redeeming and sanctifying. In the case of my own illness, I can see directly how it motivated me to make healthy changes in the way I’ve been living in a way that vanity or vague aspirations of ‘being a better person’ never could.”

Sister Baliga said her running routine bolsters her faith precisely because it is a form of voluntary suffering. A Christian life is marked by a willingness to suffer, she said, and running helps build the mental and physical muscles to better withstand suffering when it is not voluntary. There are even more benefits for Christians when they share this experience in a group, she said.

“Some of the best experiences I’ve had of people who are willing to help me carry my cross are through cross country teams,” Baliga said. Running groups are “another way to practice, a mini-body of Christ being able to live for each other. I think that’s a super effective way for catechesis of young people and, honestly, for older people as well.”

The runners you see scurrying across park trails or city sidewalks are often training for an upcoming race. Of course, some are going for a personal best, but others are striving for more than a great performance. As St. Paul writes, they are running toward an eternal prize.

Wyatt Massey is a human rights journalist in Haiti and a former O’Hare fellow at America.