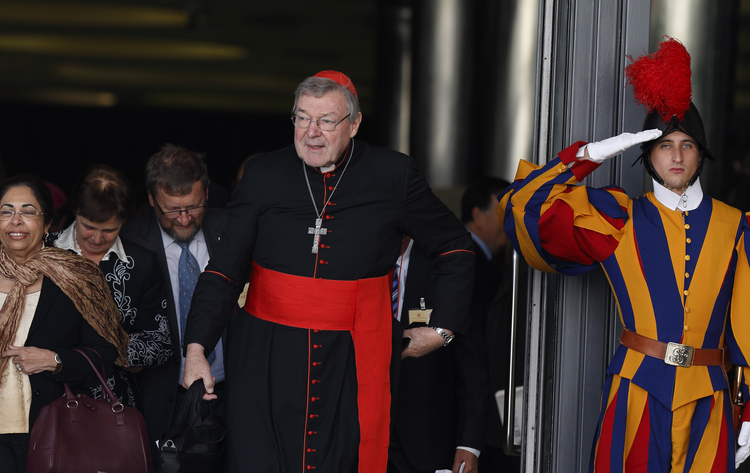 As Pope Francis finished his trip to Mexico, trouble roiled around Head of the Vatican Bank Cardinal George Pell. For the last three years, a royal commission in Cardinal Pell’s home nation of Australia has been charged with investigating child sexual abuse in the country. The commission has been given wide-ranging authority to hear testimony and call witnesses from any and all institutions, with detailed reports and possible legal action to follow.

Prior to working in Rome, Cardinal Pell served in three different dioceses of Australia. When installed as Archbishop of Melbourne he instituted that archdiocese’s first organized response towards victims of sexual abuse, the Melbourne Response. The Australian Catholic Bishops’ Conference followed soon after with its own program.

But Cardinal Pell has come under fire not only for the management of the Melbourne Response, which offered victims support and financial recompense but did not engage the police and at times moved abusers to other jobs, but for issues in both of the other dioceses in which he worked. While serving as the Cardinal Archbishop of Sydney, the archdiocese asserted that the church as a religious institution was not a legal entity and therefore could not be sued, a defense that the courts accepted. (In testimony in 2014, Cardinal Pell finally backed away from this legal strategy, saying “My own view is that the church in Australia should be able to be sued in cases of this kind.”)

In statements before the Royal Commission Cardinal Pell has also at times offered a strongly adversarial posture; in testimony of August 2014 he compared the church’s responsibility in matters of sexual abuse to that of a trucking company: “If the truck driver picks up some lady and then molests her, I don't think it's appropriate, because it is contrary to the policy, for the ownership, the leadership of that company to be held responsible.”

In the last year he has been called to come forward again, this time to speak to his work in the diocese of Ballarat, where he served first as priest and then as its metropolitan bishop while in Melbourne. Ballarat has seen some of the country’s most horrifying abuse, including one priest convicted of harming over 40 children. Cardinal Pell has been accused by one victim of having offered hush money not to go public.

But despite repeated requests, Cardinal Pell has thus far refused to come back to Australia from his work in Rome to give testimony, citing heart problems that preclude long distance air travel. While he has offered to testify via video link instead, his refusal to return has been widely interpreted within the country as a maneuver to avoid owning up to his choices and facing victims of abuse.

Earlier this week the Royal Commission agreed to receive evidence from Cardinal Pell via video link to Rome. In response a fundraising campaign was started to send Ballarat survivors to Rome for his testimony. It meant to raise $55,000; in just days it has raised over $110,000. Australian musician Tim Minchin—composer of the Tony- and Olivier-Award-winning musical “Matilda”—also wrote a song “Come Home (George Pell)” which immediately shot to number one on iTunes in Australia.

To his credit, Cardinal Pell immediately agreed to meet with survivors who travel to Rome. They’ve welcomed that gesture, but are continuing to request to be present at his testimony as well. Explained victim Gerald Ridsdale, “We will happily meet with him. But this will be a very grueling, triggering trip for everyone. We are putting ourselves through that to be in the same room as him and to see him be part of the royal commission’s process, which we have all been involved with. We can always meet him at a later date, but for me, there is little point going to Rome if we can’t see him give evidence, and that’s our priority.”

Speaking to the bishops of Mexico this week, Pope Francis said, “Do not fear transparency. The church does not need darkness to carry out her work.” In Australia, Catholics and others hold out hope that this exhortation extends not only to those in the diaspora, but to his closest advisers at home.

Show Comments (
3
)
Comments are automatically closed two weeks after an article's initial publication. See our comments policy for more.
Rosemary McHugh
4 years 7 months ago
As a physician who has met many who have been sexually abused by priests and brothers, and as one who was sexually assaulted by a Carmelite priest when I was a newly graduated young doctor at Trinity College Dublin, Ireland, I appreciate that America Magazine is writing about Cardinal Pell, who has been very cruel over many years to the victims of clergy sexual abuse and their families. Please know that the Royal Commission has now found that at least 55 boys and young men have committed suicide in the small town of Ballarat, when they gave up hope of their stories of being sexually abused and raped by their priest and brother teachers being believed, because of the denial of the truth, the lies, of the predator clergy, of their superiors, and of the hierarchy. There is so much pain in the families of the dead victims, and so much pain in the lives of the victim/survivors, that it will need a miracle from God to bring healing to these people who have been so betrayed by the leaders of our Church. There will be no credibility and no transparency in Pope Francis until he opens all records in the Vatican and elsewhere to the police for investigation of crimes committed and prosecution of the criminals, like Archbishop Diarmuid Martin has done and is doing in Dublin. The Archbishop listened to my story in 2010, referred my case directly to the police, and the priest was withdrawn from ministry. Accountability is needed and that is the job of the police FIRST, and then the Church. Sincerely, Dr Rosemary Eileen McHugh, MD, MSpir
Tim O'Leary
4 years 7 months ago
This has really escalated. Now the accusations have shifted to claiming Cardinal Pell was an actual child abuser. It certainly seems the timing of the leaks are to undermine his credibility when he is cross-examined on Feb 29. However, if he is not charged or found guilty on any of these latest accusations, then the victims warriors will lose all credibility. Cardinal Pell's office said the allegations against him were "scandalous and utterly false". I suppose for some, it doesn't matter that Cardinal Pell may actually be innocent. The importance is a scalping of a cardinal. http://www.theguardian.com/media/2016/feb/22/andrew-bolt-lashes-out-at-herald-sun-reporter-over-george-pell-story
William Rydberg
4 years 6 months ago
Technology exists today to satisfy the questions from Italy. I see no need for Cardinal Pell to risk his life with an arduous journey to the other side of the world. No matter where one stands on the Subject, its radioactive. Pray for all concerned.
Advertisement