Why are people fascinated by nuns doing normal things?

Why are people fascinated by nuns doing normal things? 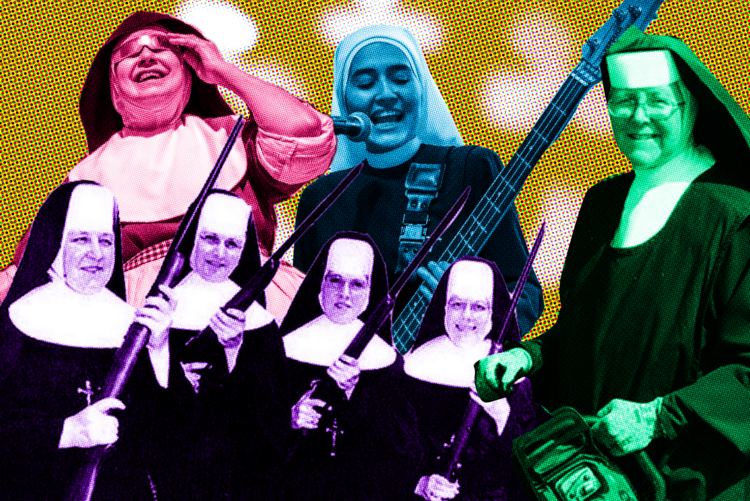 Carmelite Sister Margaret Ann Laechelin did what any public-spirited American would have done after a hurricane (and which many did). She got to work.

“The road was blocked and we couldn’t get through, and I saw somebody spin in the mud and almost go into a wall and off the road, and so there was a need,” Sister Laechelin told CNN. “I had the means; I wanted to help out.” The practical difficulties of operating a chainsaw while wearing a loose-fitting habit be damned: Sister Margaret put on gloves and eye protection and started clearing the road.

They sing! They dance! They use bad words! They go to baseball games! They have FUN!

That is how Sister Margaret became the latest viral sensation to be filed under the category of “People Shocked to Discover Nuns Do Everyday Things.” It is quite a long list:

They sing!They dance!They use bad words!They go to baseball games!They have FUN!They rob banks! (O.K., it turns out the last one was just a couple of dudes donning habits they got from a costume shop.)

Some Catholics, including my colleague Father James Martin, pointed out on Twitter that while Sister Margaret’s work is certainly admirable, it is hardly out of the ordinary.

The obsession with #NunWithAChainsaw is borderline anti-Catholic.Would people poke fun if she were wearing a hijab? Would it be as "wacky"?

If a #NunWithAChainsaw is new to u, u need to meet more nuns. 😊 We do what's necessary w love. In winter come to our house: #NunsInSnowplows

“If you think this is crazy, you need to meet more nuns!” is a natural reaction, especially if you know some religious sisters. But it is also the case that meeting women religious is more difficult than it used to be.

In 1966 there were 181,421 religious sisters in the United States. They were in schools and parishes and hospitals and universities. Odds are, if you grew up in the surrounding decades, you have memories of sisters.

Today there are only 47,170 women religious. Only 9 percent of those sisters are younger than 60. As a result, women religious are no longer part of the everyday experience of many U.S. Catholics and have faded into the realm of nostalgia.

Meeting women religious is more difficult than it used to be.

I understand the impulse to see the “Catholic Sister Does X” stories as patronizing. But isn’t it possible that God is at work in people’s fascination with women religious?

When young people can see sisters and priests living out their vocations, it is easier to imagine themselves living a life like that.

While every Catholic is bound to run into a priest, especially if they are at Mass every week, many younger Catholics could go most of their lives without encountering a sister.

Most Americans like Catholic sisters—they just don't know much about them.
Wyatt Massey, Teresa Donnellan

Changed, Not Ended: A view of religious life from a young sister
Julia Walsh

As a young man who once considered the priesthood, I had a cornucopia of discernment materials at my fingertips. Women in the church who are discerning religious life are still severely underserved. When I was a student at Loyola University Chicago, a group of students noticed this and started the organization Imagine Sisters. A “web movement that aims to inspire the imaginations of young women to consider the beautiful call to consecrated life as a sister,” it has since grown a large social media following by showing pictures of women religious doing both fun, everyday activities and the nitty-gritty work of their social ministries.

These viral stories might not always display the work nuns should be best known for, like caring for the poor, lobbying for justice and praying for the church. But they do feed a desire in the public to see sisters pursuing lives of joy and love, committed to vows of poverty, chastity and obedience—and might inspire more women to join them.

It's not just about any nun/sister -- people are naturally attracted to the work and life of nuns/sisters in traditional habits/wimples/veils. When the norm since the late 1960s is a sister in her 70s wearing a pants suit and a lapel pin, can we blame the average citizen for admiring a traditional-looking sister in the public square?

"Admiring" or gawking? Is the habit a call for attention and deference? I wonder how many other women religious did manual labor during the recovery, maybe even used a chain saw, and were not noticed, were invisible, ordinary Christians? It is all part of the entire problem of a church which does not know how to escape its patriarchal founding culture and accept women as equally human, not better or worse, with a diversity of gifts, including for leadership.

Those of us who have had negative experiences of nuns hope that the Church will find a way to develop women's leadership that is more grounded in the experiences of laywomen. Women need to bring the wisdom of wives and mothers into the Church and nuns generally do not have experience with being either a wife or a mother.

People would be surprised at any woman running a chain saw - it is just more surprising if the woman is a nun.

Long line of Ursuline nuns in our family, going back to Ireland. When I was 5, we went to the convent one Sunday and my father gave his sister (an Ursuline of course) a hair brush for Christmas. I didn't know nuns had hair.

We had Dominicans in grade school. I think that it was Sister Mary Agnes Gerard O.P. who put on a pair of heels, hiked up her habit a few inches and showed the 8th grade girls how to walk in heels for graduation.

On Facebook the other day I saw footage of a nun in habit using a chainsaw to clear away some fallen trees. There is something unexpected about seeing a nun doing this.