Most Americans like Catholic sisters—they just don't know much about them. 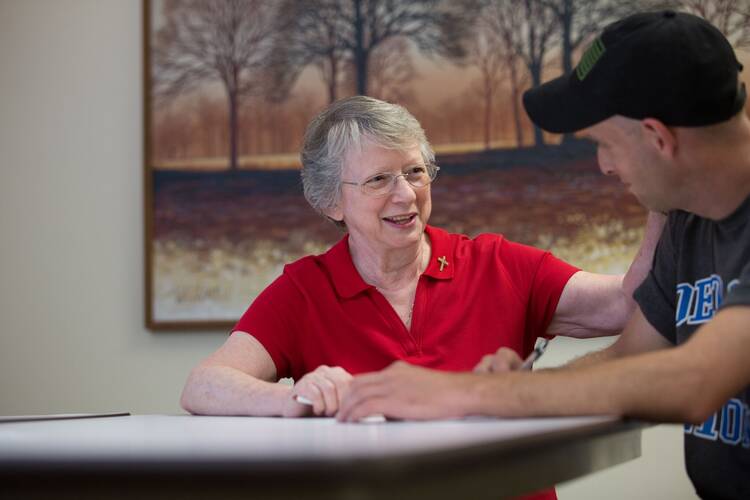 Sister Sandy Sherman thought she would follow the traditional route of women religious, joining the ranks of the Catholic teachers who had inspired her.

“I thought I would enter and I would teach school my whole life and I would wear a habit,” said Sherman, who joined the Order of Saint Ursula in 1975. “Well, I entered and I’ve never worn a habit.”

The Ohio native did teach for several years, but she has spent much of her time with Rahab’s Heart, a street ministry program in Toledo for women involved in prostitution and sex trafficking. The group offers resources and hands out personal hygiene items, food and clothing.

Like pioneers, Catholic sisters “keep moving to the edges,” Sister Sandy said. Most Americans, however, are not aware of their work.

People continue to hold outdated misconceptions about Catholic sisters and the work they do, according to recent research behind the Conrad N. Hilton Foundation’s “Sister To All” campaign to raise public awareness about women religious.

In a nation growing more defined by spirituality and skepticism of organized religion, Americans continue to hold Catholic sisters in a positive light. The vast majority of citizens trust the group and believe their work is important.

Sister Karen Bland, director of Grand Valley Catholic Outreach in Grand Junction, Colo., affirms that her work has been received tremendously by the public community. Her organization benefits the homeless, running a food bank, a soup kitchen and a place that provides free clothing. In the last 10 years, Sister Karen and her organization have overseen the construction of 62 apartments to house the chronically homeless, many of whom are mentally or physically disabled. Sister Karen has managed three campaigns to raise money for apartment construction, and each campaign has resulted in fully funded projects before construction was even complete.

Research participants for “Sisters to All” answered questions about their views on religion, as well as perceptions and experiences with Catholic sisters. More than 70 percent of people reported positive feelings toward women religious, with 73 percent of respondents saying they trust Catholic sisters.

“Americans are twice as likely to hold very favorable views toward Catholic sisters and nuns than they do for the Catholic Church and Catholic priests in general,” the report reads.

But despite these favorable views, Jennifer Robbins, C.E.O. and co-founder of Anderson Robbins Research, said Americans have little knowledge about Catholic sisters. The Boston-based organization conducted the 2015 study, which included 10 focus groups and more than 1,600 telephone surveys.

Those misconceptions include thinking Catholic sisters only support positions in line with the church or that most sisters wear habits. Catholics did not do better on the survey than other Americans in their knowledge of the group.

Sister Brenda Teresita Hernandez Valdes recalls experiencing a general wariness of sisters at the beginning of her ministry to the growing Hispanic population in Bismarck, N.D. The area had not hosted a religious community in the 50 years preceding her arrival, and she and her fellow sisters, who wear traditional habits, seemed out of place. “They didn’t really understand how to act,” she explains. Today, Sister Brenda experiences a positive business-like relationship with the community.

Several Catholic sisters contend that public perception of sisters varies greatly depending on a given area and, Sister Karen suggests, is improved where sisters are more visible in their community.

Sister Joanne Belloli, a substance abuse counselor and clinical social worker for Livingston County Catholic Charities in Howell, Mich., sees her work being readily accepted by those referred to her for help as well as by those who seek her out because of her connection to the church.

To Sister Joanne, a Catholic sister is seen by the public as “someone who will be there for them and assist them in their needs...not only counseling but also resources to get help.” Moreover, sisters offer “a church connection, a faith connection and a spiritual connection” to their community at large.

The work of religious orders does not always come to the attention of diocesan communications teams. The groups are focused on their work, not connecting with the media, said Joseph Zwilling, director of communications for the Archdiocese of New York.

“They don’t think, ‘Here’s a chance for publicity,’ because that’s not why they’re doing it,” Zwilling said.

While more than 80 percent said the work of the group is important, only 14 percent of participants reported seeing, hearing or reading about Catholic sisters recently. An additional 37 percent believe their work has little to no impact on non-Catholics.

Meeting a Catholic sister is one of the most important factors in shaping a person’s knowledge about the group, the report found. Due to the limited public presence of Catholic sisters, Americans are most likely to turn to friends and family for secondhand information about women religious, followed by interactions with the religious group in church or school.

Other interesting findings from the study include apprehension from parents about their daughters becoming a Catholic sister. About a third of respondents said they would encourage their daughter to rethink the decision.

Robbins said the hesitation is a byproduct of the lack of information about Catholic sisters. Parents think joining a religious order means sacrifice, she said.

“If someone chooses to enter a religious life, it’s not about choosing to live this closed life,” she said. “These women have these very strong communities. They are out there pursuing their dreams.”

The Hilton Foundation’s public awareness campaign will share profiles of sisters on social media to break misconceptions and show the work Catholic sisters are doing in the United States. The release of “Sister to All”  followed Mother Teresa’s canonization on Sept. 4.

The canonization is a chance to change public perceptions and educate audiences about the work of Catholic sisters do outside the church or classroom, Zwilling said.

“I would hope that we would be able to take those opportunities to encourage a deeper look at what the reality is for women religious now,” he said.

Sherman is not discouraged by the research because the work of the orders is changing, she said. Older generations may remember Catholic sisters for their schools, but the next generation is interacting with women religious in a different way, she said.

“One day, people will be telling stories about sisters who were working in prison ministry,” she said. “It’s a whole different generation of stories, and the legacy continues.”

Show Comments (
4
)
Comments are automatically closed two weeks after an article's initial publication. See our comments policy for more.
Patrick Flanagan
5 years 9 months ago
Women religious have been on the periphery long before Pope Francis masterfully spoke of the Christian's responsibility to attend to the marginalized. While a former generation might remember these women for being dedicated to academic excellence in the classroom, they continue to teach, just in different venues. How grateful I am for having had the NY Brentwood Josephites, Sparkill Dominicans, and Brooklyn Mercies as my teachers and administrators. Now I am so edified and humbled, if one can be both at the same time, by their ministries with college students, as English as a second language teachers, and advocates at immigration facilities, to name only a few of the critical works these women do. Back in my day (God I am sounding more and more like my parents), no one messed with the Sisters. Rooted firmly in biblical justice and their integrity, they understood clearly their role in advocating for the least and bringing about the kingdom of God. While times and circumstances may have changed, thankfully, their unfettered mission continues.
William Rydberg
5 years 9 months ago
When I see Sisters I see Us---family, And thats, I think how its supposed 2b.....
Joseph Guiltinan
5 years 9 months ago
As my pastor has said , "They are the face of the Catholic Church to the needy". If only the bishops (other than Francis and a few others) would say the same publicly or emulate them.
Lena Dalvi
5 years 9 months ago
I went to a all girls school ran by a very traditional nuns who wore habits. To date, those memories of those nuns still brings so much love, and not enough words for me to express how much they helped me in my daily life when I have to make decisions. I hold them in such high moral esteem, they helped me mold my life, the prayers, the discipline, structure, and most of the encouragements they gave me. They were my second set of parents and family. They lived such modest lives, never complained, I just remembered them always happy and singing even in their their modest environment. Not all like the nuns in America. I learned how to mend, sew, bake, plant and make candles from the nuns because this is how they make their living. The nuns I knew and grew up with lived in poverty and our tuition fees went towards our books, and upkeep of our buildings. I don't think I would be as devout and as deep believer as I am if I grew up seeing the American nuns and their rebellious attitude they have towards the Vatican. Just my humble opinion. plant