Catholic groups will divest from coal, oil and gas to fight climate change 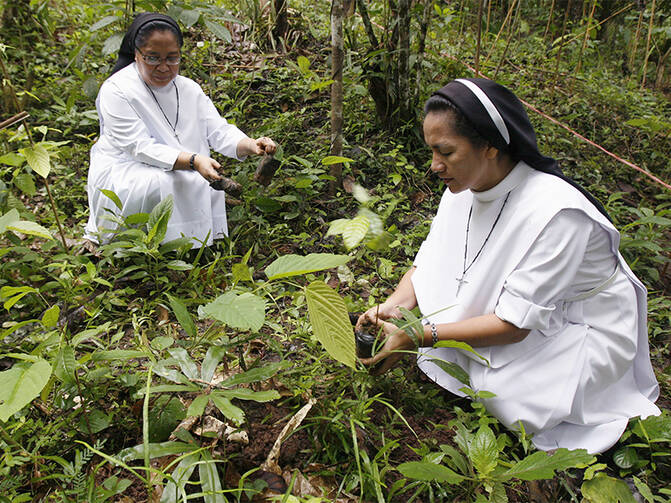 Catholic nuns plant mahogany tree saplings during a Feast of the Forest event in Cagueban town in the western Philippines, on June 30, 2012. Photo courtesy of Reuters/Romeo Ranoco

Nine Catholic organizations from around the world have announced they are divesting their savings from coal, oil and gas companies in a joint bid to fight climate change.

Religious orders and dioceses from the U.S. and Italy made the announcement on Wednesday, May 10, ahead of international negotiations due this month on implementing the Paris Agreement on climate change.

Their announcement comes amid reports that President Trump has delayed a decision to withdraw from the Paris accord until after the Group of Seven meeting in Sicily on May 26-27.

During his presidential campaign, Trump vowed to cancel U.S. participation in the accord, which obliges countries to slash their greenhouse gas emissions to keep global temperatures from rising to catastrophic levels. That agreement was signed by former President Obama, who was in Milan, Italy, this week at a forum on climate change and food availability.

“We wish to emphasize the urgency of the climate crisis and deepen our commitment to care for our common home,” said Sister Sheila Kinsey, spokeswoman for the Wheaton Franciscan Sisters.

The Chicago area sisters’ community is part of a network of 536 Franciscan women religious around the world. They joined several organizations, including Italian Jesuits and monastic communities, in the divestment decision.

“Pope Francis has called on us to listen to the cry of the Earth and to take care of the poor,” Kinsey told Religion News Service on a visit to Rome. “It is imperative that we make some decisions to capture the urgency of this moment. We have to get the message out loud and clear.

“We have a window of opportunity to do something and transition, rather than be reactionary,” she said. “We have to look at ways that people can be employed differently.”

Pope Francis has been particularly outspoken on climate change and in 2015 he devoted an entire papal encyclical, “Laudato Si’,” to the urgent need to care for our “common home.”

“Many of those who possess more resources and economic or political power seem mostly to be concerned with masking the problems or concealing their symptoms,” the pope said in the encyclical, referring to the damage caused by polluters.

In their statement, the Catholic organizations said fossil fuels such as coal, oil and gas were the main cause of the greenhouse gas emissions that are changing the climate and pushing people in the world’s poorest communities deeper into poverty.

The groups declined to reveal the total value of the investments or where they would invest their funds instead.

Kinsey said there were Franciscan sisters in Indonesia and East Timor that had firsthand experience of climate change with rising sea levels and a growing incidence of tropical storms.

In addition to the Wheaton Franciscan Sisters, the divesting organizations include the Mission Congregation of the Servants of the Holy Spirit, the Italian Diocese of Pescara, Il Dialogo, the Italian Jesuits, the Rete Interdiocesana Nuovi Stili di Vita (a network of 80 Italian dioceses), Italy’s Siloe Monastic Community, St. Joseph’s Province of the Congregation of the Passion in England and the U.S.-based MGR Foundation.

Obama---early in his presidency---announced a policy of "all of the above"--develop US independence in coal, gas, and oil----while developing alternatives. He did not do what he promised. Instead--he gave money to donors---who failed----but---put millions in their pockets. We need to become independent--while we develop a "Manhattan Project" to develop safe, renewable, affordable energy.

Obama---early in his presidency---announced a policy of "all of the above"--develop US independence in coal, gas, and oil----while developing alternatives. He did not do what he promised. Instead--he gave money to donors---who failed----but---put millions in their pockets. We need to become independent--while we develop a "Manhattan Project" to develop safe, renewable, affordable energy.