How Ferguson and Michael Brown helped me understand my baptismal vows 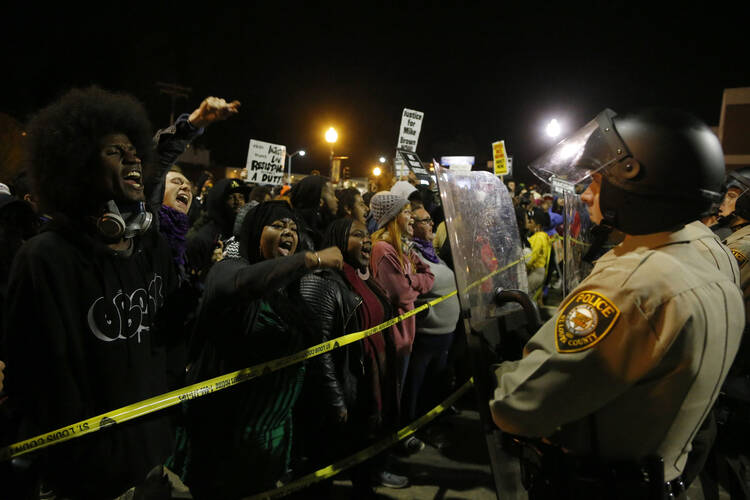 Protesters square off against police during a rally for Michael Brown outside the police department in Ferguson, Mo. (CNS photo/Jim Young, Reuters)

In August 2014, I tweeted that I wanted to go to Ferguson, Mo., in the immediate wake of Michael Brown’s death. Within a matter of minutes, a Twitter contact alerted me to a group organizing a bus ride from Washington, D.C., to Ferguson. After a few moments of contemplation, I decided to join that group on the long journey to Missouri. Why I tweeted that desire to visit Ferguson, I will never know. But I do have an idea of where the desire came from, beyond a sense of justice for and connection to the life of Michael Brown: my own baptism.

Nearly 16 years before Michael Brown was shot to death, I was baptized at Mt. Carmel Missionary Baptist Church in Fort Worth, Tex., with my younger brother. I was 8; he was 6. Planted within my heart that cool day in 1998 was God’s invitation to follow Jesus to the places and people most in need of care and attention. Often, those places can be found within. On other occasions, they can be found where, according to the Rev. Winnie Varghese, “The most vulnerable are becoming more vulnerable.” In 2014, that was Ferguson.

I felt that her sense of justice was connected to my baptismal identity.

When our group arrived, I met a black mother of two on West Florissant Avenue. “How long have you been protesting?” I asked her. “For two weeks.” “And how long do you plan on staying out here?” “Until justice is done,” she told me. In that moment, I felt that her sense of justice was connected to my baptismal identity, that my burial with Christ in his Incarnation and Paschal Mystery are a participation in a cosmic drama that comes to bear in the here and now, especially among people experiencing life’s many crucifixions and resurrections.

Christian communities are at their best when they go to those places of deep pain and suffering, trauma and woundedness, confusion, chaos and catastrophe, bearing witness to the complexity of human experience. On the doorsteps of district attorneys, demanding, like that woman in Ferguson, that justice be done. On the streets of Flint, Mich., where widespread lead poisoning is the result of a racist system in which the bottom line is more important than public health. Where are the baptized? On those streets and doorsteps, in the lives of the neglected and abused, not necessarily leading but being led; not necessarily teaching but being taught. Where are the baptized? Show me where the waters of the Jordan River have been muddied and I will show you. 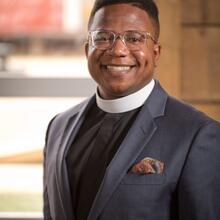 When will the authors on this site discuss the problems underlying Black communities? My guess is never, because the answer is too uncomfortable for them.

And by the way it was a black city manager that approved the water system in Flint.

I'm not sure if your question is rhetorical or honest, but I thought I'd give my best answer.

If you really want to know the causes of the "problems underlying Black communities," I would suggest you read "The New Jim Crow," "Letter from Birmingham Jail," or "A People's History of the United States." If you don't have the time to read those books, take a listen to "Myhood, U.S.A., 1937" by Sho Baraka. https://genius.com/Sho-baraka-myhood-usa-1937-lyrics

Our country and culture has done nothing but cheat, kill, and steal from any group that is not white, male, and wealthy.

My question was both rhetorical and honest. I doubt any of the editors or authors want an honest discussion.

I don't agree with your assessment but recognize that most blacks have a severe disadvantage in our society. I certainly don't agree with comments about cheat, kill and steal or surviving on the backs of the poor and hungry. I don't believe that is anywhere close to the truth. The blacks have been screwed but in other ways. But you won't see a discussion of that here.

I find much of what Rev. Greer writes to be compelling but I wish that he would stop framing Michael Brown's death as murder. The Justice Department and criminologists, not to mention the Washington Post's Jonathan Capeheart--the journalist who pushed the narrative that Office Wilson murdered Brown--have all concluded that Wilson's account was accurate.

There is deep racial inequality in our criminal justice system. But sticking to the "Justice for Mike" narrative does not serve the cause well.