Black Catholics speak about the trauma of police shootings. 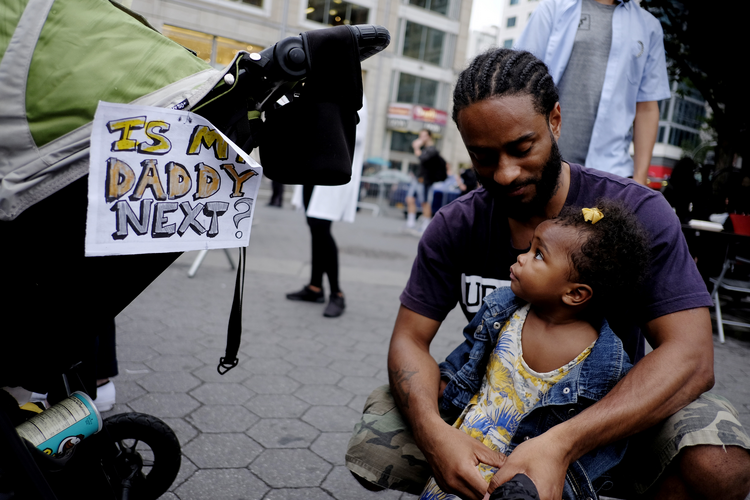 “It is really hard to maintain composure when these images are shown to you over and over each day. I have to look in the mirror and realize that Sterling or Castile could have been me.”

Ephraim White, a Baton Rouge, La., resident, spoke to me following the deaths of Alton Sterling and Philando Castile. He described the effects of these tragedies on black men and women in the United States.

Sterling was killed by police officers in Baton Rouge on July 5. Less than 24 hours later, Castile was shot and killed in front of his girlfriend and her daughter by a police officer in St. Anthony, Minn. Since their deaths, the list of victims killed by police officers has grown to include Pedro Villanueva, Melissa Ventura, Anthony Nuñez, Raul Saavedra-Vargas, Delrawn Small, Jesse Romero, Korryn Gaines, Paul O’Neal, Jamarion Robinson, Sylville Smith. Many of these deaths were also recorded, and the videos and images appeared across social media, airwaves and media outlets.

This violence creates a heavy burden, says Mr. White, who is the father of two black sons. “I’m pretty sure you have heard of the ‘Talk’ where we as African-American males are taught at a young age how to interact with the police for survival,” he says. While the “Talk” is a necessary part of a black upbringing in the United States, Mr. White believes it also deprives African-American children of their innocence. “This is unfortunate because I do not believe that all races have to experience this,” he adds.

Research shows that content related to racism and discrimination can cause issues like anxiety, depression or even post-traumatic stress disorder. Dr. Monnica Williams, an associate professor of psychology and brain sciences at the University of Louisville, studies the effects of racism. “We used to think about problems like PTSD as being caused by a single traumatic event and what we’re now starting to understand is that often it’s an accumulation of experiences that results in traumatization,” she said in an interview with Science Friday. This is worsened when the victims seen on screens remind us of ourselves.

For Mr. White, a member of Immaculate Conception Church in Baton Rouge, the Catholic Church has been helpful in these tense moments. “The church allows you to connect to the community in order to heal rather than trying to heal individually,” he says. “It helps curb the anger you feel and helps you to try and understand what is going on around you.”

Robert Muench, who has been the bishop of Baton Rouge since 2001, also spoke to me about the church’s role during these crises. Bishop Muench says the church helps to bridge the divide that exists between minorities and police departments. The church “helps us discern how to deal with the divergent views, perceptions and feelings of those who might be seen as different from ourselves,” he told me.

Merrill Patin, another Louisiana native, also spoke about his experience as an African-American man. Born and raised in Baton Rouge, Mr. Patin came of age during the Civil Rights Era and describes being a part of “the first wave of African-American students who desegregated the high school system in Baton Rouge in 1963.” (His wife, an attorney, was also part of that first wave of desegregation.) Mr. Patin, who owns a pharmacy, taught at Xavier University and served as the director of the Louisiana Medicaid Program. Because of his family’s economic status, he always viewed police officers shooting African-Americans with a kind of disconnect. He would view these videos, feel sympathetic, yet never believe he or his family could be victims. “However, based on what’s been going on, what we’re seeing with these disturbing videos recently, I firmly now believe that this could happen to me, based on the color of my skin,” Mr. Patin says.

I asked if he believes the church is as involved as it should be. Mr. Patin is also a member of Immaculate Conception and describes it as a predominantly minority parish. He says that the homilies he often hears, especially those of Father Thomas Clark, do a great job of showing the minorities in the pulpit that there is a church leader who truly cares about the issues blacks are facing. However, he wonders if the same message is being heard in predominantly white parishes. “I don’t think the Gospel, as I hear it on Sunday mornings, is being reinforced in these more affluent, conservative parishes,” he says.

“I don’t think the Gospel, as I hear it on Sunday mornings, is being reinforced in these more affluent, conservative parishes,” he says.

Kristin Trudo is a California native and graduate of Loyola Marymount University. She is currently based in St. Louis as part of the Jesuit Volunteer Corps. Ms. Trudo is an African-American woman who identifies as queer. I talked to her about the latest events and how she deals with these tragedies. “I feel numb, I just need to take a break from social media,” she says. Ms. Trudo adds that processing these events with other volunteers who are faithful has proven to be extremely supportive and helpful. She says, however, that church and religious leaders must do more in these moments, including taking a “stronger stance against police brutality.” Ms. Trudo argues that church and faith leaders should be the first to challenge the stereotypes often associated with minorities in the United States, which often lead to blaming a victim for his or her death following encounters with police officers. She tells me that despite growing up Catholic and her association with the church, she feels angry and frustrated. “I don’t understand how an institution focused on social justice isn’t more vocal during such moments,” Ms. Trudo says, adding, “for me, if you remain silent during these moments, you are complicit in violence.”

In a recent speech in St. Louis, the bishop of Belleville, Ill., Edward Braxton, encouraged individuals to engage in dialogue, emphasizing the need to “listen, learn, think, pray and act on the issue of racial equality and harmony.” He reminded audiences that we cannot ignore the African-American experience in our nation. “The point of Black Lives Matter is that many in the African-American community face existential threats that must not be ignored,” he said. For many, these comments are a welcome and hopeful step in the right direction.

Meanwhile, Ephraim White believes we are at a crossroads. These videos and images “have lifted the cover off of issues of race that have been in our society for hundreds of years,” he says. “People have had enough and they want to see change.”

Mr. Patin believes that change cannot occur without accountability and that officers should be punished if the evidence demonstrates these deaths are not justifiable.

Ms. Trudo hopes to see more white Americans involved in movements like Black Lives Matter. She hopes that white citizens encourage one another to become allies for communities of color. Ms. Trudo believes that “Nothing will change until white folks see white folks work” for justice.

@OlgaMSegura
Show Comments (
1
)
Comments are automatically closed two weeks after an article's initial publication. See our comments policy for more.
JR Cosgrove
4 years 7 months ago
A couple comments First, someone deleted a comment I made. It referred to a speech by Trump last week about the plight of Blacks in America. I excerpted parts of the speech. One can go here to see the transcript of the Trump speech http://bit.ly/2bvciiT Second, I emphasized that the problem in the Black Community is not the police and that the police are actually extremely helpful for the community. So why do people believe the false meme that the police are a problem . That is the more interesting question.