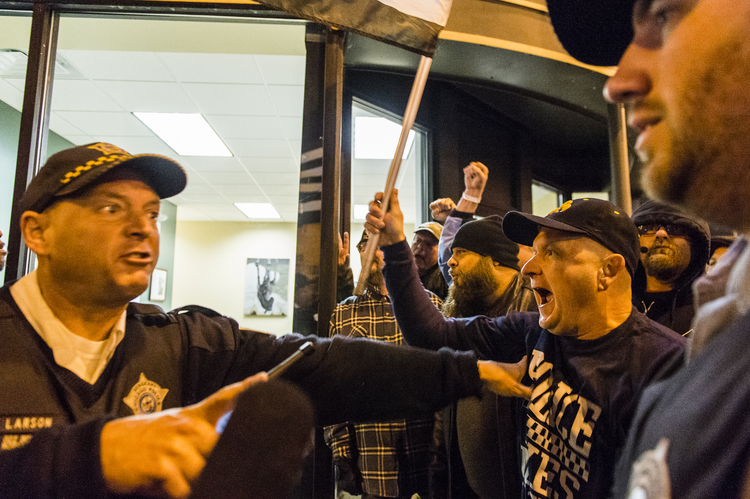 The scene was 111th Street and Kedzie Avenue, on Chicago’s South Side. In the middle of a traffic lane, about 30 protesters from Black Lives Matter marched with signs saying, “Stop Racist Police Terror” and “End Hate.” About 300 white counter-protesters followed them on the sidewalks, many brandishing “Trump” signs and shouting “C.P.D.” (to show support for the Chicago Police Department) and “Go home!”

“We are home. We’re Chicagoans,” one of the black protesters shouted in response.

It was the first of a series of Black Lives Matter protests last November in the Mount Greenwood neighborhood, an 86 percent white enclave within the largely African-American South Side. Mount Greenwood has long been home to white police officers and firefighters who use this southern edge of Chicago to fulfill their requirement to live within city limits. The march and its counter-protest showed the sharp divide in how blacks and whites view the police in a city with few integrated neighborhoods. It is a scene that could be a harbinger for other cities where there is a history of tension between minority communities and law enforcement.

The event which led to the demonstration was the shooting death of a 25-year-old African American man from Indianapolis on Nov. 5 in front of a Mount Greenwood fire station. The shooting is still under investigation and many details are in dispute.

What is known is that the man, Joshua Beal, was part of a funeral cortege driving through Mount Greenwood. When some of the cars from the procession parked in front of the fire station, the drivers were told by a firefighter and an off-duty police officer that they had to move on. An altercation ensued, drawing the attention of a police officer on his way to work.

In cellphone video released by the police, the off-duty officer brandishes his service revolver in front of the crowd. Mr. Beal then appears briefly on the video waving a handgun of his own. Within seconds, a dozen or more shots ring out, and an onlooker screams, “They shot him!” Police say Mr. Beal’s brother then tried to grab the handgun, was tackled by police and arrested.

Black activists swiftly announced they would march along 111th Street, the main shopping strip in this largely Irish-American, Catholic stronghold of family-owned businesses and bungalow homes, where the flags of Ireland and the South Side team, the Chicago White Sox, often wave from windows or front stoops. Few foresaw the raw emotions that would soon boil over.

Several times, police urge the locals to move away from the marchers. One officer pleads, “Don’t embarrass me.”

Rev. Jedidiah Brown, a 30-year-old activist in the African-American community, stands in the center of the chaos yelling into a bullhorn, “If black lives matter and blue lives matter, then what are we fighting about?”

A few days later, after two Catholic high school students were suspended for sharing racist text messages, Chicago Cardinal Blase Cupich issued a statement saying, “Racism is a sin and has no place in the church.”

Since then, tensions have eased. No matter what determination is made in Mr. Beal’s death, the events in Mount Greenwood underscore just how far apart whites and African Americans can be in this city, even when their neighborhoods sit side by side.

Still, Rev. Brown says he is heartened by a series of public meetings he has attended in recent weeks between black and white residents. He received several Facebook messages after the meetings began from white residents of Mount Greenwood who acknowledged the need for reconciliation.

“I’m 29, I work with a 59-year-old black man 40 hours a week,” one of the white residents wrote. “We disagree on politics, the way the city is run and everything in between, but at the end of the day, me and him are very good friends. We have different skin colors, but we both are from the South Side of Chicago.”

Similarly, the Rev. Tom Conte, the pastor at St. Christina parish in Mount Greenwood, says the vitriol exhibited in the counter-protests was the work of “a few knuckleheads.” He describes his parishioners as “good, law-abiding, home-owning, family-oriented, God-fearing folks” who have been unfairly portrayed in the media. Mount Greenwood, he says, is more like a small town where residents know each other by name and “know who can supply a 20-foot ladder when somebody needs to get up to the second story and clean out the gutters.”

RELATED: Judith Valente on “A Summer of Shootings” in Chicago

This was the second November in a row that demonstrations erupted over a Chicago police shooting. In 2015, protesters shut down traffic on Chicago’s busy Michigan Avenue shopping district after police released a video of a white officer shooting an African-American suspect 16 times, an action repeated on a smaller scale this past year. Father Conte says some Mount Greenwood residents reacted strongly to such protests moving to the heart of their neighborhood.

“The demonstrations were staged within 150 feet of where people live,” Father Conte says. “That residents saw that as a threat is reasonable.”

One lifelong resident of the area said many in Mount Greenwood felt their neighborhood was targeted because it is mostly white. “People were frightened. They had seen what happened in Ferguson, with people breaking store windows and setting businesses on fire. We didn’t want that here. We don’t live like that,” the resident said.

Rev. Brown says the reason protesters came into Mount Greenwood was to press for an unbiased investigation of the shooting. Rev. Brown is known to many in this community, which voted overwhelmingly for Donald Trump. He is the man who rushed the stage at a Trump rally in Chicago last spring and skirmished with Trump supporters.

One of the ideas that emerged from the public meetings is to hold a series of dinners, at private homes, bringing together South Side African-American residents and Mount Greenwood’s whites. “The idea is simply for folks to get to know one another,” Father Conte says.

It won’t be easy. Rev. Brown says the response from clergy on both sides generally has been lukewarm. “I was very disheartened and disappointed by our faith leaders,” he says. “I felt they were doing what was safe and not what was Christ-like.” At a recent public meeting at neighborhood arts center, only about seven of the 25 people who attended were African-American.

But somehow, the city’s black and white communities are going to have to come together—and soon—if only to address the mistrust that exists between so many African-American residents and the police. That tension has added to the crisis of street violence sweeping some majority-black communities. In 2016, shootings and murders are up nearly 50 and 60 percent respectively over 2015 in what has turned out to be Chicago’s deadliest year in 19 years. Dialogue is needed now more than ever.

Show Comments (
4
)
Comments are automatically closed two weeks after an article's initial publication. See our comments policy for more.
Henry George
3 years 5 months ago
From what I understand about 135 African Americans were shot and killed by the police last year. Of those, about 15 are being investigated as un-lawful shootings. Meanwhile in Chicago over 500 African Americans were killed last year. Where is the public protest and concern over a far worse murder rate ?
JR Cosgrove
3 years 5 months ago
I suggest that the author read Heather MacDonald who exposes all the lies by the Black Lives Matter movement and how they are a serious problem for the black community and not a benign social movement protesting unjust police activity. Here is her book on the subject and a lengthy article she wrote. http://amzn.to/29DZFl0 http://washex.am/2c0WGkc Here is a video by Heather MacDonald titled

"Does the Truth Matter"

http://bit.ly/2iJVnsI
Stanley Kopacz
3 years 5 months ago
Yes, the BLM should persuade black people to cooperate fully with the police. Instead of inconveniencing the police in shooting them for no reason, they should bring their own loaded gun, put it in their own mouths and pull the trigger when requested by the law officer. I'm not sure, though, that this would be enough to satisfy the old white teabags that post here regularly.
JR Cosgrove
3 years 5 months ago
Mr. Kopacz, By the tone and content of your comment, you must be unaware of the facts concerning shootings of Blacks by the police. Blacks are less likely to be shot and killed by policeman than whites are to be shot and killed by police in the United States. I will repeat that

You will notice that it has only every 5-6 months that there is a case that makes the national news or that has been only 3-4 each year. The same cases get replayed in the news every time a new case arises. But this hardly makes an example of a trend by police to shoot unarmed blacks, let alone those who are armed and brandish their weapon. I suggest you and others who think otherwise read the material I referenced below or watch the short video. It is Black Live Matter that is responsible for the increased killing of blacks in areas such as Chicago, Police have retreated from every day interactions because of the negative press they have received and have not received support from the politicians. So if you want to find blame for the disproportionate killings of blacks I would look to the liberal politicians who are responsible for the policies that make the lives of blacks fraught with danger and actually limit their police protection.
Advertisement
More: Race / Guns / Civil Rights