Cardinal Tong: The Vatican and China could be close to a milestone agreement 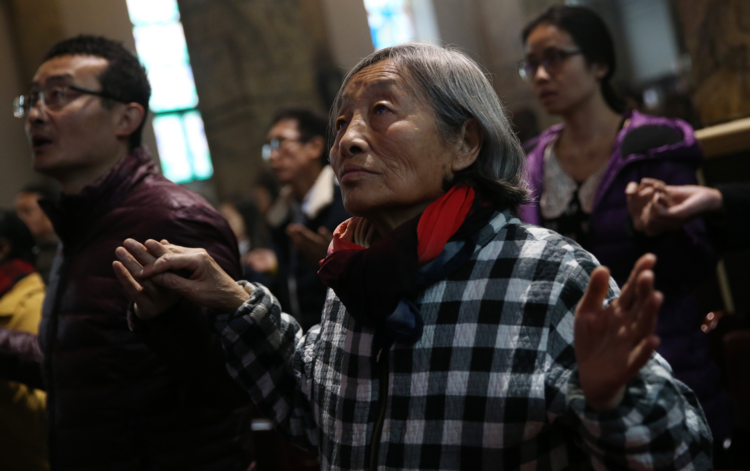 Worshippers pray during a Dec. 4 Mass in the Cathedral of the Immaculate Conception in Beijing. (CNS photo/How Hwee Young, EPA)

After years of dialogue and negotiation, the Holy See and China have reportedly reached “a preliminary consensus” that “will lead to an agreement over the appointment of bishops,” the Chinese Cardinal John Tong said on Feb. 9 in a carefully worded article published in Hong Kong.

He believes the agreement on this core problem “could be considered a milestone in terms of the development of relations between both sides since 1951,” the year China broke relations with the Holy See and expelled the apostolic internuncio.

One fruit of this Sino-Vatican agreement, which neither side has confirmed, will be that “from now on, there will be no more the crisis of a division between the open and underground communities in the church in China,” wrote Cardinal Tong. “On the contrary,” he said, “these two communities will gradually move towards reconciliation and communion on the aspects of law, pastoral care and relationships.” The cardinal predicts that the two churches in China, one officially supported by the government and one functioning unofficially, sometimes referred to as the underground church, “will work together to preach the gospel of Jesus on the land of China.”

Cardinal Tong does not pretend to speak for the Holy See, he told America in Rome on the eve of the publication of a 4,000-word article that offers an overview of what the Sino-Vatican agreement could look like and what problems would remain to be resolved. He presents this as his view on important issues “related to the Sino-Vatican dialogue from an ecclesiological perspective.” He said the article is the result of much reflection and wide consultation and at one stage asserts that the two sides “have already reached a consensus on the problem of appointing bishops.”

“From now on, there will be no more the crisis of a division between the open and underground communities in the church in China.”

He explains that “if the pope has the final word about the worthiness and suitability of an episcopal candidate,” as Catholic doctrine teaches and as he understands is part of the agreement, then the other problems related to the nomination of bishops that had been considered insurmountable become relativized.

He mentions two specific problems: “the elections” of the candidates to be bishops by “the local churches”—which has been the policy and practice in China since the mid-1950s aimed at building a church independent of Rome—and the recommendations for bishops’ ordinations from the bishops’ conference of the Catholic Church in China, which are not so much recommendations as pre-ordained decisions. Once the agreement comes into force it is expected that the bishops’ conference in China will have a normal advisory role on ordinations.

Based on this agreement, the cardinal said, other problems “are going to be resolved.” He mentioned three: the future of the Chinese Catholic Patriotic Association, the legitimacy of the seven illegitimate “self-nominated and self-ordained” bishops in the official church community and the recognition by the government of the more than 30 bishops of the underground church community.

Cardinal Tong recognizes that “China and the Holy See have different interests. The Chinese government is concerned with problems on the political level, while for the Holy See, the problems are on the religious and pastoral levels.”

Consequently, the two sides will approach these problems differently “in terms of their urgency.” It will require mutual trust, patience and confidence to resolve them in good faith and “without compromising our own principles.”

Born in Hong Kong, the cardinal, age 77, is one of the most knowledgeable churchman in the field of Sino-Vatican relations, having served as head of the Holy Spirit Study Center in Hong Kong since its foundation in 1980. The center gathers information on what is happening in China and in the Catholic Church there and is considered the leading research center on the mainland church. Last August, he published another article, “The Communion of the Church in China with the Universal Church,” that provoked much discussion.

If the agreement over the nomination of bishops is confirmed, the next major issue will be over the future of the Chinese Catholic Patriotic Association, the arm of the state that manages the bureaucracy of the church in China. In this new article, he acknowledges that many view the C.C.P.A. as “a mountain between [Rome and Beijing] that is impossible to move.”

Cardinal Tong: Use Hong Kong As 'Bridge Church' to China
From AP, CNS, RNS, Staff and other sources

Rule of Law and other 'Western' notions are worrying Beijing. Here's why.
Verna Yu

A Bridge to Beijing: Can a 16th-century Jesuit help rebuild Chinese-Vatican relations?
John A. Worthley

The association was established in the 1950s by the Communist government to control the Catholic Church on the mainland. Its status and role in the future has not yet been discussed in the Sino-Vatican dialogue. According to its statutes, the C.C.P.A. is based on the theoretical principle of an “independent, autonomous and self-run Church” and the practical principle of the “self-nomination and self-ordination” of bishops. Pope Benedict XVI, in his “Letter to the Catholics in China,” described it as “a government agency” that is “incompatible with Catholic doctrine.”

The cardinal described the theory and practice of the C.C.P.A. as “the product of a distinctive political environment and pressure” that “do not go to the intrinsic qualities of the church of China.” At the same time, he reported that both the unofficial (underground) and the official church communities in China “are actively seeking and expressing complete communion and unity with the universal church.” This is also true of some bishops who were ordained without the pope’s approval.

He said the ongoing dialogue between China and the Holy See “implies that changes have already taken place in Beijing’s policy on the Catholic Church” because, through the agreement, it “will now let the pope play a role in the nomination and ordination of Chinese bishops.” China also “recognizes” his “right of veto” and acknowledges that he is “the highest and final authority in deciding on the candidates for bishops in China.”

He believes the Sino-Vatican agreement will enable the principle of “self-nomination and self-ordination to go into history” and, consequently, that the C.C.P.A. “would turn into a patriotic association in its strict, literal sense: a voluntary, non-profit, patriotic and church-loving organization composed of clergy and faithful from all around the country.”

There are some 100 bishops in the church in China today. Seven are illegitimate because they accepted ordination without the papal mandate and automatically incurred excommunication (three were declared excommunicated), a penalty that only the pope can lift, the cardinal said. Moreover, it is alleged that some of the seven have “problems” of “moral conduct.”

The Holy See and Beijing have reportedly agreed to deal first with the illegitimate ordination of these bishops and then with the other possible offenses. Since all seven have sent letters to the pope expressing willingness to submit themselves to him unconditionally and pleading for forgiveness, “pardon is therefore a highly probable outcome,” Cardinal Tong said.

But “this does not mean they have the right to govern a diocese,” he added, because “only those who are in conformity with faith, morality and Canon Law” can be granted this right. For this reason, he said, “time and patience” are required before the problem of the seven can be finally resolved.

He said perhaps “the most difficult problem” in the Sino-Vatican dialogue is how to resolve the situation of the more than 30 bishops from the unofficial communities. The recognition by Rome of the government-sanctioned bishops’ conference depends on the inclusion of all legitimately ordained bishops in the entire church in China, not just those promoted by the C.C.P.A.

Perhaps “the most difficult problem” in the Sino-Vatican dialogue is how to resolve the situation of the more than 30 bishops from the unofficial communities.

“This will require Beijing’s recognition of their identities and power to govern their dioceses as bishops,” Cardinal Tong said. But it is not certain how willing Beijing is to recognize this. It will remain a major subject of the dialogue from now on. He believes the key to solving this problem is to establish trust between the underground bishops and the government; Rome can help both sides here since it has established mutual trust with Beijing.

Cardinal Tong recognizes that not everyone shares his optimistic reading of the Sino-Vatican agreement, and in the last part of his article he seeks to address their concerns, including those about the lack of complete freedom for the church and for other religions.

As a religious institution, he said, the Catholic Church in China “is not political and has no political aspirations.” Its concern and that of the Holy See is whether there is enough room for freedom of religion in China for the church to be able to practice its faith.

“If Beijing is now ready to reach an agreement on the appointment of bishops with the Holy See, the church in China will enjoy an essential freedom, albeit it not complete freedom,” he said. On the other hand, “if the church gives up the present essential freedom, she may not gain more, but might end up losing all her freedom.”

He sees stark options facing the Holy See today in its dialogue with China: “The choices in front of us are either to embrace the essential freedom now and become an imperfect, but true church, then struggle for complete freedom in the hope of moving towards a perfect church, or we give up essential freedom and have nothing at all, and then wait for complete freedom—but no one knows when this will ever happen.”

Cardinal Tong concluded: “The moral principle of the church teaches us to choose the lesser of two evils. Therefore, under...the principle of healthy realism that Pope Francis teaches us, it is clear which path the Catholic church in China ought to take.”