A Bridge to Beijing: Can a 16th-century Jesuit help rebuild Chinese-Vatican relations?

A Bridge to Beijing: Can a 16th-century Jesuit help rebuild Chinese-Vatican relations? 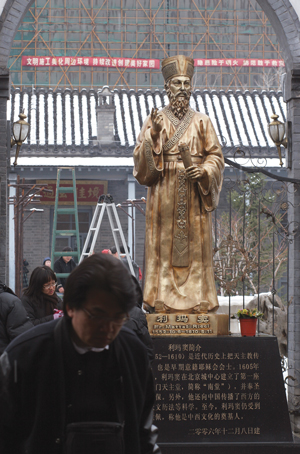 Devotion to Matteo Ricci, S.J., is visible throughout China. Statues and icons of the man appear nationwide. Prayer cards for Ricci’s intercession are in widespread use. Mother Teresa’s sisters, the Missionaries of Charity, follow their founder’s practice and seek Ricci’s intercession daily for their efforts in China. Centers and Institutes promoting the example of Ricci exist in America, Australia, Europe and Asia. And the Vatican itself recently presented a special Ricci exhibit inaugurated by Pope Benedict XVI, who applauded Ricci’s “search for harmony between the noble and millenary Chinese civilization with the Christian novelty.”

All this makes one wonder: Could this 16th-century, European Jesuit, adopted by China four centuries ago, become a bridge to reconciliation between the Vatican and Beijing? The faithful on both sides of the world seem to be shouting yes.

As phenomena suggesting the heroic virtue of his life become more widely known, the cause for Ricci’s canonization is crystallizing. The result could well be that Ricci, whose Chinese name is Li Madou, becomes an instrument of grace completing the East-West bridge that he began building when he arrived in Guangdong, China, in 1582. In the mystery of the Holy Spirit the timing is exquisite: As the church in the West wanes, the church in China thrives.

Ricci’s canonization cause formally began in 1984 through the diocese of his birth in Macerata, Italy. The process is focused on heroic virtues as the sign of Ricci’s holiness. The progression of testaments to the heroic virtue of his life is compelling.

It begins with his holy persistence. Permission for foreigners to enter China was rare as the 17th century loomed. When an invitation surfaced in 1583 to work in Zhaoqing, Ricci determinedly embraced it and shared with China the science and technology of the West, gradually gaining some acceptance until he was expelled in 1589. But he persevered and was eventually given permission to relocate to Shaoguan, further north. From there he continued the unlikely pursuit of Beijing, reaching Nanjing in 1595 and Suzhou in 1598. When war in the north prevented him from proceeding, he waited with patience. By 1601 word of his genuine esteem for China, as well as the practical generosity of his high-tech gifts (like a clock and a world map), was so compelling that the seemingly impossible occurred: He was invited by the Ming emperor Wanli to become the first Westerner welcomed into the Forbidden City. Ricci quickly contributed major advances in Chinese astronomy, mathematics, musicology and cartography and centered his ministry at what today is the site of the Cathedral of the Immaculate Conception.

This formidable accomplishment was made possible largely by Ricci’s practice of the virtue of solidarity. Though he was not the first Westerner to enter Cathay (Marco Polo and others preceded), he was the first who chose to stay—and he never left. Instead of remaining a visitor in a strange land, Ricci embraced Chinese language and culture, quickly mastering Mandarin and Confucianism. He even sought solidarity liturgically by praying Mass in the vernacular, vesting in mandarin garb and preaching the Gospel with Confucian concepts centuries prior to the insights of the Second Vatican Council.

Ricci’s virtue of humble friendship is evident from the way the Chinese embraced him. His ability to garner invitations that were seldom, if ever, offered to foreigners seems to have been a fruit of his genuine esteem for China and his graciousness in working with the Chinese to blend Western scientific and artistic advances with Chinese receptivity. Notable is Xu Guangqi, an imperial official and scientist who became a Christian and a great friend. He helped Ricci meld Confucian concepts with Christian theology. Fittingly, his own beatification cause has been opened by the Diocese of Shanghai.

Perhaps the strongest evidence of China’s embrace of Ricci relates to his death. Inexplicably—perhaps because of the perceived heroic virtue of Ricci’s life—the emperor overrode ancient traditions banning the burial of foreigners in Chinese soil. Wanli provided imperial grounds for Ricci’s tomb. And, perhaps the most salient indication of the perception of Ricci’s sanctity, that tomb has been honored and protected through the centuries. Even during the Cultural Revolution, when anything remotely Western was desecrated, the tomb of Matteo Ricci was protected. Today it is a point of pilgrimage for the Chinese faithful as well as foreign visitors. (I personally considered it a miracle when government officials, as an honor to me as their professor, permitted me to celebrate one of my first Masses at Ricci’s grave in 1990.)

Within the church, Ricci is a remarkable example of the virtue of heroic obedience. The willingness of Ricci and his fellow Jesuits to adapt to Chinese culture was controversial in Rome, where the view prevailed that the melding of Chinese rites with Christian theology was problematic. Undoubtedly cognizant of the implications for his evangelization work, Ricci nonetheless remained an obedient priest while thriving in the imperial court. He found a heroic way to be both faithful to the universal church and loyal to China. Today bishops and priests in China face a similar challenge and look to Ricci for guidance.

A stunning testimony to Chinese esteem for Ricci stands today on Sheshan Hill outside Shanghai, an astronomy museum under secular authority that honors heroes of China’s scientific history. Prominently displayed is a portrait of Li Madou, with an extensive explanation of the advances he developed in China for observing the heavens through the eyes of science. Adjacent is the Basilica of Our Lady Help of Christians. Images of Matteo Ricci appear there, too, in recognition of his role in helping China see the heavens through the eyes of faith.

The widespread devotion of the faithful to Ricci and the extensive evidence of the heroic virtue of his life suggest that his beatification is destined to take place. The process itself might help to heal the rifts of recent decades—and pave the bridge that he built—if the diocese of his birth and baptism and the diocese of his death and burial were to join hands in the cause. In conjunction with Shanghai’s process for beatification of Xu Guangqi, the canonization could symbolically bless the friendship of China and Christianity. By illuminating the compatibility of Chinese culture with Christian customs, as well as the enrichment of Christian theology through Confucian concepts, a joint focus on Matteo Ricci could significantly soothe Vatican-Chinese relations. His remarkable nurturing of profound mutual respect at a time when distrust prevailed offers a holy path to reconciliation.

Matteo Ricci fervently embraced China. China fondly embraced Li Madou. The implications for Rome and Beijing abound in the blessed personage of that East-West hero. His deep humility, abiding respect, quest to understand and eagerness to blend brought China and the West together in his day. Highlighting those heroic virtues today in Vatican-Beijing relations offers a potential path over the bridge to harmony.

Show Comments (
5
)
Comments are automatically closed two weeks after an article's initial publication. See our comments policy for more.
Nicholas Clifford
8 years 4 months ago
How encouraging to think that Ricci may be canonized! In any case, surely he deserves wider recognition than that simply of historians of China (e.g., Jonathan Spence's "The Memory Palace of Matteo Ricci," a fascinating book).

I would qualify Prof. Worthley's piece by pointing out that the adaptation by Ricci's Jesuit successors to Chinese ways was much more than "controversial" and "problematic." Three times such attempts were quashed by a Vatican that had little understanding of the issues: by Clement XI in Cum Deus Optimus (1704); by Clement again in Ex Illa Die, of 1715; and finally and definitively by Benedict XIV in Ex quo singulari (1742). These prohibitions were to stand forever, and so they did, or if not quite foreverm, at least until Piux XI in effect reversed them in 1935 and 1939.
Today - at least in Taiwan - (to quote the historian Fr. Jean-Pierre Charbonnier) "the traditional rites in honor of heaven and the ancestors, which had been banned for Catholics until 1939, were celebrated officially within the setting of the liturgy for the lunar new year. in Taipei, the archbp, surrounded by dignitaries in long black robes, presided over the offering of fruit and incense before the great red tablet of wood, on which the following inscription had been inscribed in gold characters. 'Honor to heaven; honor to the ancestors.' In some Catholic churches, a small altar of the ancestors was permanently placed in a side chapel."
One wonders whether Benedict XIV is spinning in his grave, and (far more important) how the history of the Church in China would have been different without Ex quo singulari.

GEORGE PARAMPIL REV PHD
8 years 4 months ago
Congratulations on highlighting the contributions of Ricci to China. What a beautiful life it was. Everything good in the Chinese culture was absorbed    by Ricci.
The problem with the present Communist government is not the question of adaptation. The are against people practicing their faith, independent of them.
The Communists have no respect for religion. The know the freedom to practice one.'s faith the foundation of their totalitarian system. Hence their opposition is based on a different scale.
GEORGE PARAMPIL REV PHD
8 years 4 months ago
In the previous comment, what I was trying to say was that the Communists know that the freedom to practice one's faith would destroy the foundation of their totalitarian system.
They will not allow anything to touch the basis of their atheism and totalitarianism.Adaptation won't change their attitudes.The Chinese people would definitely like the  adaptation of Chinese culture in the practice of the faith.It is not a question of whether people like it or not but whether the totalitarian system of Communist ideology that guides the governemnt would like it.We have to be realistic in our appraisal of their ideology and their practice.Peripheral acts of tolerance on their part do not indicate that they  are willing to part with their atheistic ideology.
8 years 4 months ago
Ireland never had any martyrs.  St. Patrick and the Irish missionaries wisely "baptized" whatever good they were able to find among the Irish tribes they were evangelizing.

Makes one wonder what might happened in Rome if the early Christians, for instance, "baptized" the incense everyone was obliged to offer to the emperor.

The serious XVIII century prohibitions of Clement XI and Benedict XIV were imposed  to shield the church from pagan practices. The new wisdom of "inculturation" made it possible to make Christian the traditional Chinese rites of honoring the ancestors, noble practices Matteo Ricci tried in vain to sell to XVI century Rome.
8 years 3 months ago
It is marvelous to consider the power of the Holy Spirit as China comes to greater power. Some of their past is catching up to them. M. Kelly
Advertisement

This article also appeared in print, under the headline “A Bridge to Beijing,” in the April 2, 2012, issue. 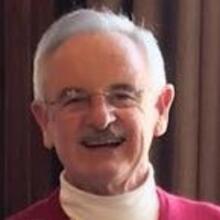 John A. Worthley has been a visiting professor of public administration in China for 30 years. He is an emissary for Vatican-China relations.