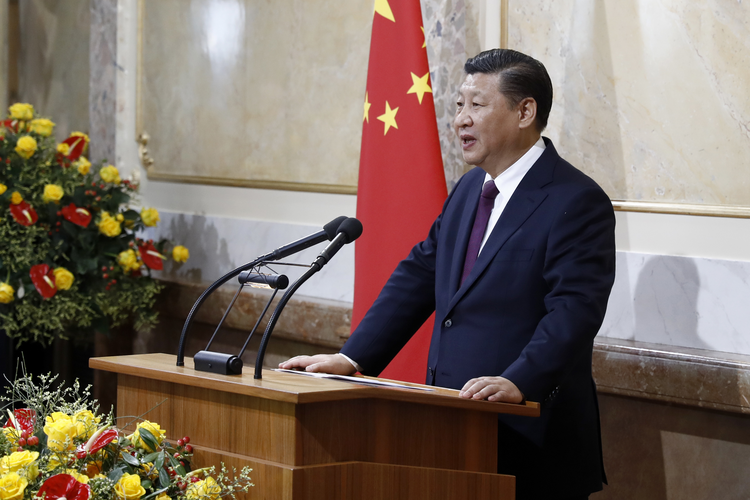 China's President Xi Jinping speaks in the house of parliament during his two days state visit to Switzerland, in Bern, Switzerland, on Sunday, Jan. 15, 2017. (Peter Klaunzer/Pool Photo via AP)

The Chinese Communist Party’s hostility toward Western liberal ideologies was laid bare in a recent speech by China’s top judge during which he urged cadres to reject “erroneous” Western notions such as “constitutional democracy,” separation of powers and judicial independence.

State media reported on Jan. 14 that Chief Justice Zhou Qiang told court officials across the country that they must “unswervingly resist erroneous Western thoughts” in order to carry out ideological work.

“[We] must have a clear stance and dare to show the sword,” said Mr. Zhou.

“We must never fall into the trap of erroneous Western thinking and judicial independence,” he said. Rhetoric that negates the leadership of the Communist Party or vilifies the “socialist rule of law and judiciary with Chinese characteristics” must be “struggled against,” he said. People who use the internet to endanger national security, spread rumors and incite protests must be punished, he added.

Professor Jerome Cohen, a China law expert at New York University, wrote on his blog that Mr. Zhou’s statement “is the most enormous ideological setback for decades of halting, uneven progress toward the creation of a professional, impartial judiciary.”

In a separate address to law enforcement officials, Chinese President Xi Jinping stressed the primacy of “regime security.” Taken together the two statements indicate that the party is placing its own interests over the rule of law, and its ongoing crackdown on dissent may intensify, lawyers and human rights advocates say.

Just two days before Mr. Zhou’s speech, Mr. Xi told court officials and security officials that they must “heighten their sense of crisis and political alertness” to face all kinds of risks ahead of the 19th party congress, the most important political reshuffling event for the Communist Party that will take place later this year.

Analysts say these comments will embolden police and officials to step up an ongoing crackdown on government critics and amount to a reversal of China’s support of the notion of judicial independence in the past three decades. “The message from Zhou and Xi to police, prosecutors and courts is that they can brazenly crackdown on people who pose a threat to the regime,” said Beijing-based rights lawyer Yu Wensheng, who has handled many sensitive political cases and been tortured in police detention.

“To them, the security of their regime is the most fundamental issue. Rule of law is just a slogan for deceiving people,” he said. “For the sake of the regime and the establishment’s security, they are willing to do anything.”

Since he came to power in late 2012, Mr. Xi has overseen the most severe crackdown on dissent since the Tiananmen pro-democracy movement was crushed in 1989. Hundreds of rights advocates, lawyers, liberal scholars and N.G.O. workers have been detained or arrested for their criticism of the government or work that the government saw as “subversive.”

In July 2015, about 300 lawyers and rights activists were interrogated, detained and harassed by police. Although most were released within days, several have been sentenced to jail while others were paraded on state and pro-Beijing Hong Kong media “confessing” to their supposed guilt.

By turning its back on judicial independence, China is reversing the legal reform efforts it embarked on in the early 1980s, when it was emerging from the shadows of the Cultural Revolution (1966-76). The statements from these two party leaders hark back to a darker era of Mao doctrine, when Western ideologies and values were criticized as “bourgeois” and seen as an attack on Marxist socialism.

During the 1957 Anti-Rightist Movement—a sweeping campaign that targeted intellectuals who dared to question Mao’s authority—rule of law and judicial independence were condemned as notions that were at odds with “the people’s democratic dictatorship.”

But after the trauma of the Cultural Revolution, when China started to carry out economic and political reforms in the 1980s, the terms “judicial independence” and “separation of power” appeared in the official press in a positive light. The rule of law was seen as a necessary tool for the country to succeed in an era of reform.

Even after the Tiananmen crackdown in 1989, the idea of judicial independence continued to be endorsed by the leadership. In 1995, China was a party to The Beijing Statement of Principles of the Independence of the Judiciary.

Under Mr. Xi’s leadership the rejection of Western ideologies has returned. In 2013, an internal party edict known as Document No. 9 was issued. It ordered cadres to tackle seven subversive influences on society, including “Western constitutional democracy” and “universal values” such as human rights and free speech. The document says the “separation of powers,” “independent judiciary” as well as multi-party system are concepts of the “capitalist class.”

Although a politburo member, Zhang Chunxian, has already said two years ago China would not practice “Western judicial independence,” Mr. Xi and Mr. Zhou’s aggressive tone is unprecedented and indicates that the party will not tolerate any challenge to the its authority, analysts say.

The veteran journalist Ching Cheong, who was jailed for three years in mainland China, said the leadership wanted to send a message that “there is no justice in the judiciary and everything is about the party’s interests.”

He said the statements suggest the regime’s insecurity, describing them as “the Communist Party’s reaction to its own vulnerabilities.”

Willy Lam, a political commentator, said: “Xi wants to revive Mao’s practice of party-control-all and he is nervous about inharmonious voices in the party ahead of the party congress.”

Analysts say this does not bode well for China’s human rights situation.

According to William Nee, a China researcher at Amnesty International, “Human rights lawyers…will face increased threats, intimidation, potential sanctions and disbarment, potential criminal punishments and even violence if they speak out publicly for their clients or engage in any sort of collective initiatives.”