Move over, Bellarmine. For Franciscans, today is the Feast of the Stigmata of St. Francis 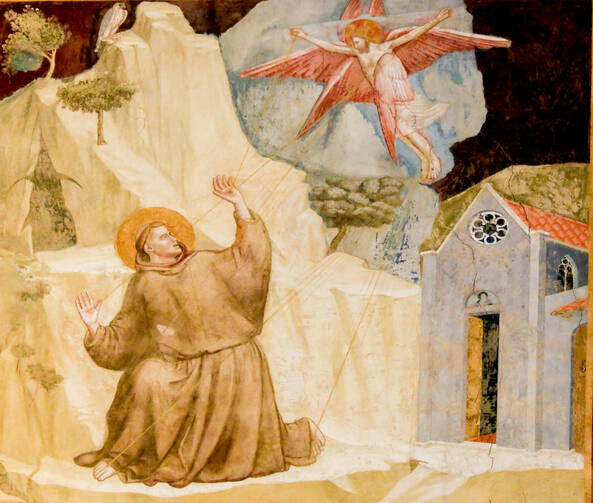 Today is the feast of St. Robert Bellarmine (d. 1621), the important Jesuit bishop and theologian. Or is it?

With all respect to my Jesuit brothers and the universal church, for whom today is the memorial of St. Robert Bellarmine, the worldwide Franciscan family celebrates the feast of the Stigmata of St. Francis each Sept. 17. It has always struck me as an awkward celebration, at least at first glance. It would appear that Franciscans the world over are celebrating five wounds, celebrating the pain and suffering the we know accompanies what is sometimes billed as a great grace or gift from Christ. And it remains awkward and even weird if we remain fixated on the crucifixion wounds that appeared on Francis's body.

But this feast day actually has little to do with these wounds as such.

Rather, the feast of the Stigmata, at least theologically, is a much more complex and robust celebration. What we see when we take a closer look beyond the disputed history of hagiography and medical inquiry (numerous studies have been written about the veracity of the Stigmata accounts, most recently Solanus Benfatti's book, The Five Wounds of Saint Francis [2011]), is not a question of what appeared on the outside of the Poverello, the poor man from Assisi. Instead, we are invited to look more carefully inside, to the interior life of a Christian disciple who wished nothing more than to follow in the footprints of Christ.

This is at the heart of the Feast—a recognition that what appeared externally on Francis's body was reflective of his interior conformity to the lived example of Jesus Christ.

In his conclusion, Benfatti writes:

It is essential to comprehend that Francis had never thought to pick and choose aspects of the life of Christ to dress himself up in, but rather had chosen something that I would say is much harder because there is far less control in it: he had chosen, simply, to follow. Francis chose to move forward step-by-step in the footprints of the Lord, which I say is dangerous, because who can know where it will lead? (p. 236, emphasis original)

This is at the heart of the feast—a recognition that what appeared externally on Francis' body was reflective of his interior conformity to the lived example of Jesus Christ.

Believe it or not, St. Francis wasn’t always a saint.
Daniel P. Horan

So often we are people who judge from the exterior—how someone dresses, how or what someone speaks, where someone lives, what someone does, and so on. Yet, as the Scriptures continually remind us, God judges what is inside and in our hearts. The feast of the Stigmata is a celebration of a Christian life lived as fully and authentically as possible. The "grace" that was given to Francis was not some random burden or some freak sideshow illness, it is a visual and corporeal representation of what only God can typically see—a baptized man who lived as fully as he could bearing the resemblance of Christ.

Daniel P. Horan, O.F.M., is a Franciscan friar of Holy Name Province (New York) and is currently a Ph.D. student in systematic theology at Boston College. Father Dan studied at St. Bonaventure University where he earned a B.A. (Honors) degree in theology and journalism.

@DanHoranOFM
Show Comments (
1
)
Comments are automatically closed two weeks after an article's initial publication. See our comments policy for more.
Bruce Snowden
7 years 8 months ago
An interesting explanation of St. Francis' Stigmatization. I'm wondering if Fr. Daniel was saying that the wounds were in effect self-imposed on the surface of his body by the power of Christ within, that Christ of whom Francis had become so perfect a copy, a "carbon copy" if you wish, that on the "paper" of Francis' persona Christ could squibble clearly an image of themselves, a unique identity of the two of them, so much "as one" had Jesus and Francis become to each other? Exciting but boggling! So, guessing, stigmatization is the result of a Christian life perfectly lived, meaning that those of us who have lived, or are living a perfect Christian life automatically bare the "marks of Christ" on our bodies, as St. Paul claimed he did, or like Padre Pio, whose visible stigma markings disappeared after death. Did Father Francis' stigma remain after death? Interesting, mysterious, hard to wrap your mind around it. Please God, I hope that I as a Christian, am a "marked man." Thanks Fr. Daniel for your explanation.