Hipster Catholics get a handbook 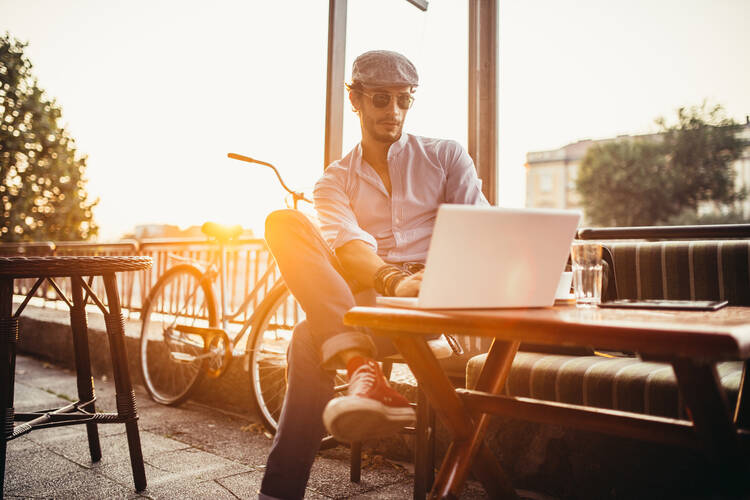 I spend an inordinate amount of time on Twitter, using the social media app to gather news, read up on gossip and generate story ideas. A quirky trait of Twitter is that it often splinters into an array of informally organized subgroups: black Twitter, gay Twitter, doctor Twitter, democratic socialism Twitter, journalist Twitter and almost every other kind of Twitter. These groupings help perpetuate the social-media bubble so lamented by those concerned with political polarization, but they also allow those passionate about a certain topic to connect with other like-minded people from all over the world to form a real if virtual community. Not surprisingly, there is an active world of Catholic Twitter, which I dabble in from time to time. (As a reporter covering the church, I like to think I’m in Catholic Twitter but not of it.)

One prolific Catholic tweeter is Tommy Tighe (@theghissilent), a family therapist who takes unabashed delight in all things Catholic, sharing his thoughts on everything from Latin Mass to Catholic Social Teaching in 140 character bursts several times each day. His tweets can be political, but they tend not to be easily identified as liberal or conservative, often transcending the typical divisions that exist within Catholicism itself.

When Mr. Tighe announced (on Twitter, of course) that he was editing The Catholic Hipster Handbook (Ave Maria Press, Sept. 2017), I jumped at the chance to read it. I was hopeful that a young-ish Catholic voice would be able to present the faith in fresh ways, breaking free of the left/right divide that plagues our church in this country. After reading the book, I found that Mr. Tighe and his collaborators succeed—though it is less certain that the book will break through to many of his Millennial peers who are skeptical of institutions generally, including the Catholic Church.

An essay by Mary Rezac, a journalist at EWTN, on how shopping at local farmers’ markets is an extension of her faith, for example, is fresh (pun intended) and a bit unexpected. As someone who’s spent a fair number of hours studying Catholic social teaching and is thus familiar with the notion of subsidiarity, I had not connected this particular teaching to where I choose to buy my produce.

Mr. Tighe defines hipster culture as “going against the trend, turning away from the mainstream; it’s about the coolness of being a part of the ultimate counter-culture.” When it comes to defining what makes Catholicism hipster, The Catholic Hipster Handbook argues that being Catholic is hipster in itself. So, the book contends, why not mine the tradition for its quirkiest customs and celebrate them without reservation?

The Catholic Hipster Handbook argues that being Catholic is hipster in itself.

A chapter entitled “Loving the Old Calendar” encourages hipster Catholics to search out the seasons of the pre-Vatican II church and celebrate holidays lost to time, such as rogation days that pray for bountiful harvests. Another chapter encourages attending daily Mass to honor feast days. Sister Brittany Harrison, FMA, contributes a chapter on guardian angels, another aspect of Catholicism that can seem antiquated or silly to some Catholics. “Every person has an angel specially chosen by God to guard and direct him or her during life on earth,” Sister Harrison writes.

How the hipster can save the monk (and vice versa)
David J. Michael

I’m not a hipster, but many of the things I love come from hipster culture: strong coffee in sleek settings, farm-to-table entrees eaten inside Edison-bulb-illuminated restaurants and a steady stream of banjo-tinged pop music by artists whose names I can never remember. One of the downsides of hipster culture, however, is that it often comes off as exclusionary or condescending to those not in the know. Unfortunately, hipster Catholicism, at least as this book defines it, falls into the same trap.

Many of the essays suggest that being Catholic in today’s culture leads to an inevitable clash with secular values. For example, in an essay by FOCUS ministry’s Melissa Keating on finding one’s vocation, the author argues, “the very notion of vocation is under attack in a culture that cannot understand a healthy marriage between two people, let alone the spiritual marriage of religious life or priesthood.” That style of presenting the faith may not appeal to young adult Catholics.

For all its strengths, The Catholic Hipster Handbook works in something of a closed system—and the Catholic subculture it uses as inspiration is not always friendly to the idea of a big-tent faith. The chapter on the Latin Mass by Anna Mitchell, producer of the “Son Rise Morning Show” on EWTN, drips with condescension aimed at Catholics who enjoy the style of Mass that is still the most common in the United States.. The Latin Mass, Ms. Mitchell writes, offers “no possibility for silliness on the altar.” Is the implication that the non-Latin Mass is filled with silliness? The book’s contributors identify with a certain culture warrior flavor of Catholicism. The star of the book is Pope John Paul II, who is mentioned twice as frequently as Pope Francis.

Engagement in the U.S. culture wars, thankfully, is the exception. The contributors spend most of their energy helping to recover traditions within Catholicism lost to time. The chapters, which span just a few pages and are easy to read, include brief reflections on a “cool saint,” many of whom were new to me. (Did you know Saint Mary Domenica Mazzarello was the most stylish young woman of her 19th-century Italian village, teaching other girls how to make clothes in order to instill in them a sense of confidence? Neither did I.)

If this were Twitter, the Catholic Hipster Handbook would merit at least a “like” and probably even the more highly coveted retweet.

If this were Twitter, the Catholic Hipster Handbook would merit at least a “like” and probably even the more highly coveted retweet. With 2,000 years of Catholic history, it’s inevitable that parts will become lost, and the authors succeed in resurrecting some of the more offbeat stories and customs well worth remembering.

Michael O'Loughlin is the national correspondent for America and author of The Tweetable Pope: A Spiritual Revolution in 140 Characters.