Father Carl Kabat & the Plowshares Eight: What do we risk to speak the truth? 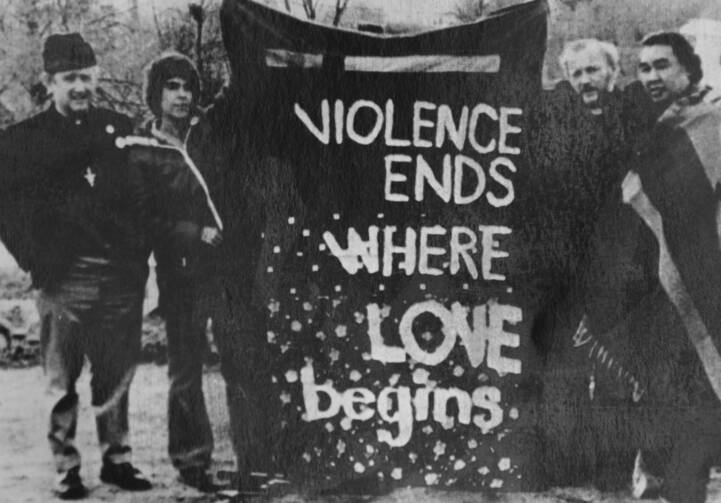 On Aug. 4, 2022, two days short of the 77th anniversary of the U.S. atomic bombing of Hiroshima in World War II, the United States lost a powerful witness against the insanity of the nuclear age when Carl Kabat, O.M.I., died in San Antonio, Tex. A dedicated activist for peace and against nuclear weapons over many decades, Father Kabat was also somewhat famous among certain circles for his more idiosyncratic methods of protest, including wearing a clown suit during protests. Kabat, who called himself “a fool for Christ,” spent more than 17 of his 88 years in prison for his activism against war and the U.S. nuclear weapons program.

Father Kabat, who called himself “a fool for Christ,” spent more than 17 of his 88 years in prison for his activism against the U.S. nuclear weapons program.

In a 1981 profile of Kabat in America by Jerry Ruff, Father Kabat confessed to being a bit of a latecomer to anti-nuclear activism. Born in 1933, he joined the Oblates of Mary Immaculate after dropping out of college and was ordained a priest in 1959. It was during his seven years as a missionary in the Philippines and Brazil, Kabat told America, that earlier hints of his calling to “speak truth” began to manifest themselves more clearly. When he came home from Brazil “and saw my father (a farmer) getting paid not to grow food,” he said, he was convinced of the connection between American military might and the starvation and poverty he had witnessed around the world. Even when nuclear weapons are not used, he argued, they are already killing the poor—because of the money invested in their development, protection and upkeep.

Kabat’s official assignment from the Oblates from 1977 to 2002 was as a “peace activist,” and his first prison stint came when he was 44, in 1978, a yearlong sentence for trying to chain the doors of the Pentagon shut. A year later, he poured blood on the White House in protest of American nuclear weapons policy; a year after that, he was arrested again for pouring blood on the Pentagon. In 1979, he explained his actions to the National Catholic Reporter:

When the state puts such resources into weapons of destruction, it’s a healthy thing for Christians to be in trouble with the state. The times being what they are, I believe it’s appropriate for a Christian to be behind bars.

On Sept. 9, 1980, Kabat and seven others—Philip Berrigan, John Schuchardt, Molly Rush, Anne Montgomery, R.C.S.J., Elmer Maas, Dean Hammer and Dan Berrigan, S.J.—entered a General Electric plant in King of Prussia, Pa. (“It wasn’t a break-in; the door was open and we just walked in,” Kabat said), and used hammers to damage two nuclear warheads. They also poured blood on the warheads and nearby documents. The protesters, known afterward as the “Plowshares Eight,” were arrested without further incident and were tried in early 1981 for burglary, criminal mischief and criminal conspiracy. Their name came from a passage in the Book of Isaiah: “And they shall beat their swords into plowshares, and their spears into pruning hooks; nation shall not lift up sword against nation, neither shall they learn war anymore.”

Carl Kabat: “Christ broke the law. He overturned the tables of the moneychangers and took charge of the temple. He cured on the Sabbath, He plucked grain on the Sabbath.”

“At some point at least some of the Plowshares 8 can expect to be behind bars,” wrote John B. Breslin, S.J., a contributing editor at the time, in a March 1981 issue of America. “It is a sign of their moral seriousness that they accept that likelihood. It is a sign of how precariously we are balanced on the razor edge of nuclear terror—and how reluctant we are to acknowledge the fact—that they should feel forced to do so.” Sure enough, all eight were found guilty on March 6, 1981. Kabat was sentenced to three to 10 years in prison, though all eight had their sentences reduced after numerous appeals to the time served before trial. Kabat would be in and out of jail for much of the next two decades.

Starting in 1994, Kabat began wearing a clown suit to protests to show the absurdity of the nuclear arms race. He continued to protest until just a few years before his death; his last arrest, for trespassing and damaging property at a government nuclear facility, was in 2019. In response to critics who argued he should not be breaking the law in his protests, Kabat had a ready answer: “Christ broke the law. He overturned the tables of the moneychangers and took charge of the temple. He cured on the Sabbath, He plucked grain on the Sabbath.”

The 1980 action in King of Prussia sparked the Plowshares movement, one that continues to witness against the U.S. nuclear weapons program still today. In 2019, almost four decades after the initial action in King of Prussia, a number of Plowshares activists went on trial for illegally entering the U.S. base at Kings Bay, Ga., on April 4, 2018, the 50th anniversary of the assassination of Martin Luther King Jr., to protest the Trident submarine nuclear missile program.

What concrete results did Kabat and his fellow protesters expect would come from their activism? It didn’t necessarily matter, Kabat told Ruff in 1981: “You do what you have to do and leave it in God’s hands.” Still, what would Kabat like to see come of all his activism? “‘Get rid of all the damn nuclear bombs,’ Father Kabat laughs, ‘at least stop making them.’ More modestly, though, Father Kabat hopes that ‘more people will take responsibility to do whatever ought to be done’”:

Risk a little. It’s difficult to say what that means. It might be putting a banner up in front of your church, or writing a letter to the paper, or handing out a leaflet on the comer. It’s different for everyone. Go at whatever level you’re at, but take some sort of risk to be speaking truth.

Carl Kabat: “The times being what they are, I believe it’s appropriate for a Christian to be behind bars.”